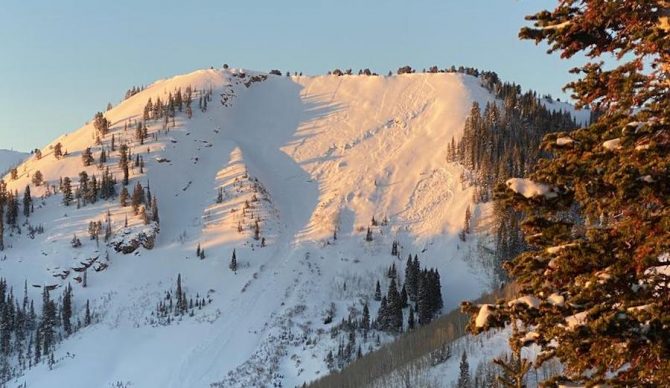 Square Top, part of the terrain accessed by the 9990 lift, after the avalanche on January 30, 2021, which killed Kurt Damschroder. Photo: Utah Avalanche Center

Last February, following a skier-triggered soft-slab avalanche in the Park City, Utah sidecountry area of Square Top Mountain, Park City Mountain Resort decided to temporarily close the 9990 backcountry gate, served by the 9990 lift on the Canyons side of Park City. This season, the backcountry gate will be permanently closed, following talks between Park City officials and the U.S. Forest Service.

This past snow season was a strange one by previous standards, with COVID-19 restrictions creating a tricky roadmap for enjoying resort skiing and riding, as well as one of the most unstable snowpacks in recent years in the backcountry. Of course COVID also inspired many new backcountry users to get out, with plenty of inexperienced skiers and riders seeking to access wild snow for the first time.

Strong education campaigns seem to have made a big difference, with a huge increase in sign-ups for backcountry safety courses. “We educated 60-percent more students than we did last year. And so it was a record year for us,” Russell Hunter, owner and CEO of the Colorado Mountain School told SKI magazine. However, the 2020-21 winter season still tied the record for avalanche fatalities in the U.S., with 36 recorded deaths as of April 23.

Backcountry gates have long served as a way for experienced skiers and riders to escape the hustle and bustle of resorts without the tremendous effort of skinning an entire mountain. On powder days, they can also serve as a way to extend the fun for the experienced and non-risk-averse skiers and riders when in-bounds terrain has been tracked out. And their creation has been supported by the U.S. Forest Service, which encourages Utah resorts to provide access to public lands such as backcountry territory.

Despite all the good, to Park City Resort, the gate is no longer worth the risk. Visitors can still access the same terrain, but will now need to use the Peak 5 gate, which will require more hiking. Resort management hopes the decision will deter less experienced visitors from being tempted to head into the lift-accessed backcountry without proper training and equipment. Mike Goar, COO of Park City Mountain Resort, told KPCW, Park City’s NPR affiliate that he believes the closure “will change the demographic and the volume of people accessing that terrain.” Many believe that the temptation factor of the 9990 gate was one of its main problems. “You’ve got a pretty clear view of a whole lot of powder and you have pretty easy access,” said Charlie Sturgis, executive director of Utah’s Mountain Trail Foundation. “So the decision to impulsively step out of bounds, step out of your skill level, is pretty easy to do up there.”

However, Sturgis and many other in the community, are against any sort of closure. in March, Sturgis told The Salt Lake Tribune that, “I’m completely for access. I’m completely for individuals taking responsibility for their own actions.” Ben Kraja, who manages special use permits for the U.S. Forest Service’s Salt Lake District said he has “received numerous — I can’t even count how many — phone calls about that topic,” and can’t recall a single one that was in favor of closing the gate.

From the Resort’s perspective, the closure of 9990 may have been prudent but it hasn’t come without serious blowback from the backcountry community.

If you’re thinking about getting out into the backcountry this winter, be sure to check out our Avalanche Awareness Course from pros Nick Russell and Sam Thackeray to learn all the ins and outs of backcountry safely.