Utah Congressman Jason Chaffetz has been in the news the past few weeks for his proposals to force the sale of more than 3.3 million acres of federal land, and barring the BLM and Forest Service from enforcing the law on public lands they administer.

In a high school gym in the center of one of the reddest states in America, a raucous crowd eviscerated Chaffetz for his attacks on public lands. This is in Utah—a state where Republicans hold the governorship, both state legislatures and the entire Congressional delegation. It has the second-highest percentage of federal land of any state in the Union (66.5 percent) and a political establishment hell-bent on giving it away to their patrons in the oil and gas, mining, and ranching industries.

Chaffetz is their poster-boy.

But what he forgot is that Utah isn’t populated entirely by ranchers, LDS soccer moms and coal-rolling climate deniers. It’s also chock-full of dirtbags who care about little more then backcountry skiing, climbing, hiking and paddling—people who use and love some of the most majestic public lands in America.

Those people showed up in force last night, and no one made their case more clearly, or more poignantly, than a nameless raft guide who called out Chaffetz for being in the pocket of big industry. He’d met Chaffetz once before, at the takeout of the popular Westwater Canyon stretch of the Colorado River. He apparently gave him an earful then, and last night he schooled the well-scrubbed young congressman again on what really matters in this life. 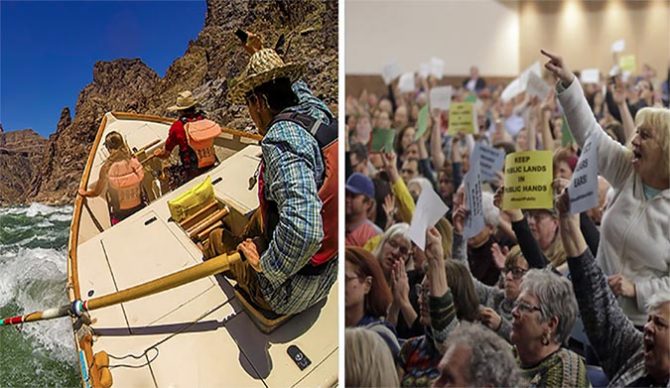 “I told you that I have nothing,” he shouted from the back of the room. “Running rivers is my life. It’s what I do. And I told you that the only thing I’m ever going to have in my life is these wild and free lands.”

The raft guide even tried to make common cause with the congressman, but his question was biting. “I think that you probably are an outdoorsman and you probably do enjoy the outdoors. So what I want to know is why—why are you granting all this access to private interests?”

Now, if you’re looking for a real answer to that question, start with the fact that Chaffetz received $51,800 last year from the oil and gas industry alone.

“Answer the question!” hollered people in the crowd.

“We had a very good discussion. I was out there on the river. I do enjoy the outdoors. One of the things that I enjoy as much as anything, when I want to clear my head and breathe fresh air and get my blood pressure down, I like to do wildlife photography and I love our public lands for doing that. . . .”

House Resolution 621 is the bill Chaffetz introduced to sell off more than 3.3 million acres of federal land, and Chaffetz got his biggest applause of the night when he took credit for pulling it—even though he was the one who introduced the land-grab bill in the first place. He was forced to withdraw the H.R. 621 after a massive nationwide outcry from outdoor lovers of all kinds—including a groundswell of opposition from hunters and anglers—put pressure on Chaffetz and his Republican house colleagues.

Still, the crowd was not about to let him off the hook. Before the applause died, the cry rang out: “What about 622?” House Resolution 622 is the bill Chaffetz introduced to strip law enforcement authority and funding from the BLM and U.S. Forest Service—a change that would delight wildlife poachers and big polluters alike. But if last night’s crowd is any indication, Chaffetz is going to have a tough fight on his hands.

So is there anything the raft guide and the Congressman see eye-to-eye on? Well, maybe. Chaffetz did receive $15,000 in campaign donations from the National Beer Wholesalers Association.