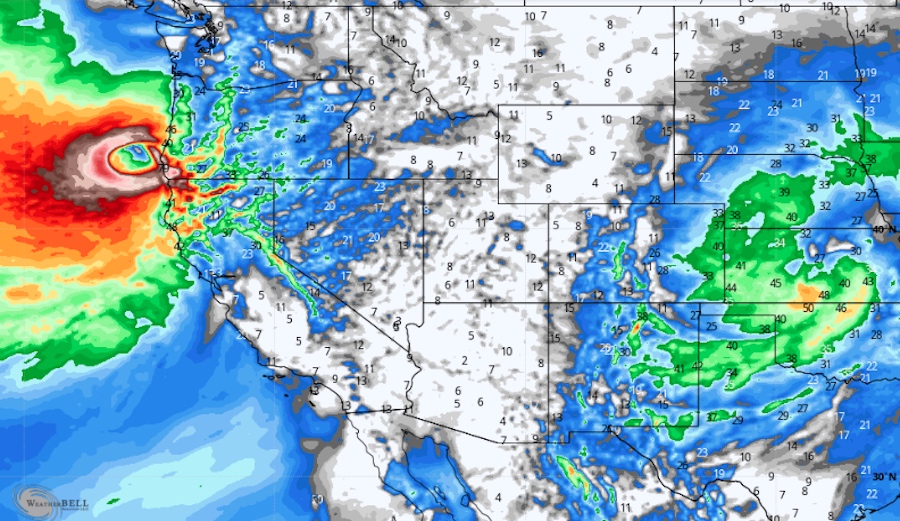 It’s been a dismal fall for the Sierra Nevada but that’s all about to change. According to our friends at Powderchasers.com, a serious winter storm is about to dump two to three feet of snow at upper elevations for most resorts in the Sierra with the Sierra Crest forecasted to get up to four feet.

“The snow should begin falling in Tahoe Tuesday afternoon, and temperatures will be cold enough for plenty of snow down at at lake level, with snow levels falling to ~2,000 feet,” wrote the site. “The snow will be heavy Tuesday afternoon through Wednesday, and by Thursday, Squaw Valley, Kirkwood, Sugar Bowl, Dodge Ridge, Sierra at Tahoe, and the other resorts north of 80  should have two-three feet. The other mountains around the lake including Heavenly, Homewood, Northstar, etc. should do well too, with 1.5-two feet by the time the storm winds down. Mammoth Mountain will also see 1.5-three feet. There are some signs of additional storms during the first week of December as well, so let’s hope that comes to pass. Truckee and Lake Tahoe should see 16-24″ out of this storm also.”

In a second post, Powderchasers explains that the pow forecasters are watching two storms, the first will dump on Colorado (which has already had a great fall), and the second will be the aforementioned banger set to make California and the Pacific Northwest white. That first storm is apparently hitting as we write. Utah is expected to get five to nine inches today with at least a foot in the extended forecast as well. Southern Washington, Oregon and Southern Idaho are all expected to see significant snow as well with the Sun Valley area expecting to get up to 16 inches.