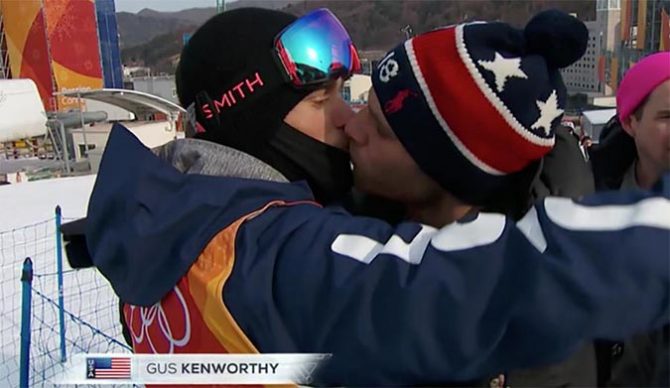 Kenworthy has become much more than just a freeskier. Photo: NBC

American freeskier Gus Kenworthy was a silver medalist in Sochi but he couldn’t quite muster the same magic in South Korea. He failed to make the podium, but he won in a much more profound way. On Sunday morning, before the slopestyle qualifying run, Kenworthy’s boyfriend Matthew Wilkas gave him a hug and a quick good-luck kiss. NBC’s cameras captured the moment and broadcast it back home, during what was Saturday night prime-time television.

Sports in general have been one of the last holdouts of homophobia. It wasn’t until 2013 that America saw its first openly gay man among the four major professional sports, NBA player Jason Collins, followed by NFL player Michael Sam in 2014. Kenworthy didn’t come out until a year after Sochi, in 2015, in an ESPN the Magazine story. He was the first action sports athlete to do so and in 2018, Kenworthy, along with figure skater Adam Rippon, became one of only two openly gay men to compete for the United States in the Winter Olympics.

The significance of Kenworthy’s very public display of affection was not lost on viewers, and it quickly went viral. The next day, Kenworthy posted to both Twitter and Instagram: “Didn’t realize this moment was being filmed yesterday but I’m so happy that it was. My childhood self would never have dreamed of seeing a gay kiss on TV at the Olympics but for the first time ever a kid watching at home CAN! Love is love is love.”

As the stepmother of a gay teenage son, I wanted to stand up and cheer. Within our progressive, liberal-minded hometown, my stepson is accepted and supported by his peers, but watching him begin to experience life outside that safety net has been eye-opening. Last summer in Montana, during a family vacation to Yellowstone National Park, he was bullied by other boys in the changing room at a hot springs resort for his painted toenails. I was walking beside him later when a pickup truck sped past us in the parking lot and a young man shouted out the window, “Go back to California!”

We don’t live in California, but that’s beside the point. There are still many places in America where being openly gay comes at an intolerable price. And unless you live it, it’s hard to grasp that reality. You can get a small sense of it, maybe, by recalling the horror story of my generation, which happened in Wyoming in 1998. A gay college student, 21-year-old Matt Shepard, was beaten, tortured, and left chained to a fence to die by two men he met at a bar. While my stepson was spared that sickening moment in American history because he wasn’t born yet, the horror story of his generation happened shortly after he’d come out. In 2016, a gunman entered a gay nightclub in Florida and went on a massacre, killing 49 people and wounding 53 more. The latest FBI report on the topic shows that LGBT (lesbian, gay, bisexual and transgender) people are more likely to be targets of hate crimes than any other minority group in America. They are twice as likely to be targeted as African Americans, and the rate of hate crimes against LGBT people has surpassed that of crimes against Jews, which lead that dubious category until 2014.

I love my country. #TeamUSA

Seeing superstar athlete Kenworthy’s kiss on prime-time television made my stepson feel safer about going out into the world. It made him feel more comfortable in his own skin. Should he one day become an Olympic athlete, he won’t have to hide who he is. For his harassers, and would-be harassers, maybe something like this will help shift their negative perceptions, even just a little. The idealist in me hopes it creates a more inclusive culture where people are less likely to abuse my stepson for being “different.” Or to want to hurt him because of who he loves.

Kenworthy didn’t bring home a medal. He struggled in the final round, battling both a broken thumb and a hip injury incurred earlier in training. He finished a disappointing 12th. But I’d argue he made an even more significant contribution to the American consciousness than Olympic gold: He showed our children a new normal—a place where it’s safe to be your true self. Where love, is love, is love.