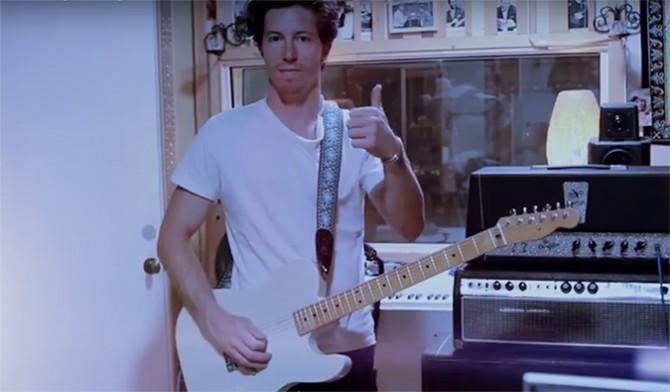 Photo: From the Bad Things video, Caught Inside

In unsettling news for snowboarder Shaun White, TMZ recently released a follow up story to an earlier report that the Olympic gold medalist is being sued by a former bandmate for backpay and sexual harassment. White, along with drummer Lena Zawaideh (who filed the suit) and several other musicians formed the band, Bad Things, in 2008 and played selective shows up until around 2013.

Zawaideh claims White, who plays guitar, took over control as band leader as soon as he joined and began paying each member nearly $4,000 per month. But she also says he turned “diva,” making demands that the band travel with him to rehearse as he trained for the Olympics. This from TMZ:

Zawaideh also claims White forced her to rehearse while sick, demanded she cut her hair before a show in France … and ultimately stopped paying her because he felt she didn’t need the money. The most serious allegation in her lawsuit, Zawaideh claims White “made inappropriate and sexually harassing and suggestive comments” to her in person and in texts.

White vehemently denied the claims in a statement released through his attorney, acknowledging that he did exchange messages with Zawaideh. He did not go into detail regarding the content of the messages, however, but explained that they were exchanged when the two were friends and that the suit is “bogus”: “Many years ago, I exchanged texts with a friend who is now using them to craft a bogus lawsuit. There is absolutely no coincidence to the timing of her claims, and we will defend them vigorously in court.”

“I am pursuing this case because women should not have to tolerate harassment at work,” she said in a statement obtained by the site. “Shaun White should not be allowed to do whatever he wants just because he is famous. Although I am embarrassed to have been treated this way, I cannot sit by and watch him do this to other women.”

Zawaideh claims White owes her more than $40,000 in backpay. In the suit, she’s also asking for an undisclosed amount in damages.

Admittedly, this story is tough to report given TMZ’s often smutty reputation. But the outlet has broken important stories, including the Ray Rice domestic abuse scandal that rocked the NFL, among others.