The Slice‘n’Dice series is back with its fourth volume, this time highlighting the power of the carve and the allure of the snowy night slopes of Niseko, Japan. Dave Crozier and Lewis Sonvico exhibit their extraordinary abilities to sync up two unique riding styles and slick turning skills and spins while zipping through barrels of white powder and tearing their way through Niseko’s infamous inbound tree skiing. While this artsy form of grazing the body to the ground on sharp calculated curves to snapping full 360 spins from the ground is an impressive lesson in gyration, it’s also a style that is indicative of Japanese-specific snowboarding techniques or as they would call it, snowsurfing.

The riders took full advantage of the opportunity to be in the “Land of the Rising Sun” where solace is found in the turn and local Gentemstick (mark and style of snowsurf board) riders are highly influential. On top of that, the abundance of fluffy, soft powder wasn’t too shabby. The eccentric measures of riding and filming under the floodlights help to make for quite the euphoric scene. “Riding at night was awesome,” Sonvico told me. “We would scope things in the day and try to ride them at night…real wild weather made things a bit more of a challenge, but we can’t complain.” 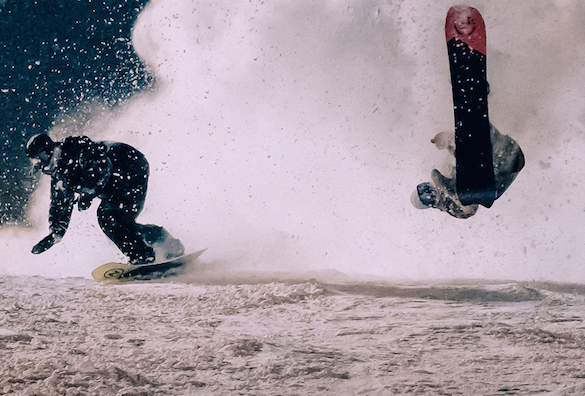 Slice ‘n’ Dice is all about the turn. And the occasional tumble. Photo: Ed Blomfield

For filmer Sam McMahon, getting those night shots just right was a task in itself. With the intense wind factor and temperatures dropping to minus 13 degrees (Fahrenheit), this meant even more challenges in the quest to document the fast-paced scene. “Oh man, filming was nuts,” said McMahon. “A couple of nights the wind factor was crazy. Horizontal snow, frozen fingers, cameras…the works. I know it sounds obvious, but it was dark the whole time!” The darkness is part of what draws viewers into the scene; the eeriness and stark black and white composition of two snowboarders charging through the snow throwing up white smoke clouds of powder is enough to make any avid shredder want to book a one-way ticket to Japan instantly. It’s a powerful and anomalous scene that one doesn’t always see in the typical snowboard short.

For the riders, the unprecedented task of harmonizing in correlation has been an ongoing project that started in 2016 and has been avidly documented by filmers McMahon and Ed Blomfield, who have spent countless hours chasing these riders around. Yet even for Crozier and Sonvico, the perfection is what lay in the art and satisfaction of giving the Euro-carving style the respect it needs to flow on the slopes with the occasional tweak and touch of personality here and there. It’s more than big air, rails, and halfpipe–it’s the soul of the turn and the snowsurf style that for so long had been a quiet scene that existed within the confines of Japan. Now it’s grown worldwide and a revisit to the holy land was just what the crew needed to cleanse their souls. “Early starts and late nights,” said McMahon, “with the odd dip in an onsen to see us through…but you only live once, eh?” Just another reason why Japan is the real deal for any snow enthusiast seeking a good time.