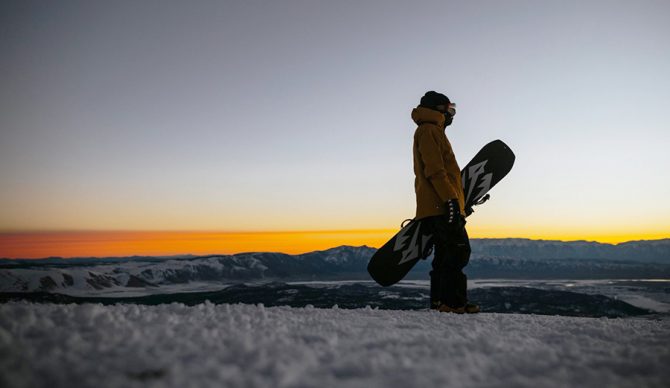 Editor’s Note: This piece was done in partnership with Ikon Pass.

Ikon Pass holder, professional snowboarder and rock climber, Lonnie Kauk grew up seeking magic lines throughout his native Yosemite Valley and surrounding mountains. From early turns as a two-year-old with his grandfather to scoring a pass at Mammoth Mountain – and now an Ikon Pass for the 2021/2022 season – Lonnie continuously embraces one step of stoke after the next.

The Ikon Pass crew sat down with Lonnie to discuss his journey from Yosemite grom to professional athlete. Get locked-in as we discuss stoke, taking the right steps, and what keeps him moving in the mountains.

Lonnie, hey man – thanks for chatting with us. Give us the quick double chair bio of who you are today, where you live, and what has you stoked for the upcoming year?

Right now, I’m near June Lakes, just 20 minutes north of Mammoth Mountain. Basically, things are good right now, I’m just taking some new steps, and the stoke is super high. I just signed with 686, so that’s been super fun. Also, my trademark just finalized. It’s called Magic Line and it’s based off this climb that my dad did in 1996 – and then 20 years later I did it. And then 2-years later I did it again, but in my own style, which is just, like, gnarlier.

So, with all these good things happening, I’m thinking, how do I support some of the kids out there and teach them what I learned from the whole game, and how do I get them opportunities that they can take hold of? How can I facilitate some of these kids and give one of them a door that they can open – so that they get a pass or they get a board and gear, you know? It would be an opportunity for some kid that maybe doesn’t come from a wealthy family that can send them to all these camps. That could change their whole life. That’s where my heads at, for sure.

And, you know, it’s one of those things where you want everything to go full throttle, but you’ve just got to do one step at a time. So, it’s just, “what’s next?”

And you were a part of the Ikon Pass MyConnection video that came out over this last winter, right?

Yeah, the MyConnection project was so cool. I was really stoked on that. Everything from the approach to the way it turned out. It was perfect, for sure. To give me and the other guy a little voice was so good. I’d love to do more good work with you guys, of course.

Interview Note: During winter 20/21, Lonnie helped to create a short film directed by Shaandiin Tome, a Diné woman, to speak to the ski and snowboard community and encourage others to connect, respect, and appreciate the land while also welcoming Native people into the conversation:

Awesome, well it sounds like the stoke is high – that’s a super fun headspace to be living in; we love it. So, looking backwards a bit, what drew you to the snow? When and how did you start riding? What are some of your earliest memories on the hill?

Oh man, the stoke is so crazy hot right now. It’s so hot, in fact, that I’ve got to be like, “ok, chill man, don’t get caught up in trying to do this quantum leap in steps.” Instead, it’s way more important to just focus on doing the next immediate step. Get that one over with and then just keep stepping up, and – you know – just keep the inspiration flowing like that.

But, looking backwards… basically, I was introduced to skiing through my grandpa on my mom’s side. You know, my family was all born and raised in Yosemite, and ever since we were little, little guys – our grandpa put us on skis because he always wanted us skiing. Then, eventually, my mom, my uncle, and my sister were all on the ski team, and they’re all great athletes. In fact, my sister almost went to the Junior Olympics. She did pretty dang good, too, but unfortunately picked up an injury. And then I also had my older brother to go with, and he always made me feel way more confident out there on the snow.

So, yeah, I started skiing at two or three years old – on little baby skis – and then grew into being on the ski team as well. I loved going fast, and even then, I loved getting air. I was able to get some really good times in the Slalom and Super-G, but I remember I’d be purposely catching air off the knolls, and the coaches would be like, “hey, Lonnie, keep it on the ground. You know, you’re blowing, like, six whole seconds with that stuff.” Haha. 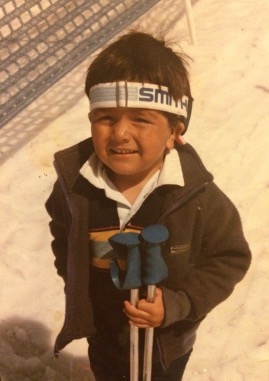 Sometimes it’s just natural to take flight – we can definitely identify with that. Now, you have a long-standing connection to Mammoth Mountain as well, right? How’d that happen?

Well, eventually, I really really wanted to start snowboarding, and this dude gave me this early Jake Burton snowboard, and I just started riding. And then finally, I got a decent setup and that was pretty much that. I’d still go ski race, and right after we’d finish training, I’d swap my gear and go ride.

And, what’s important to know, is that snowboarding wasn’t very accepted at the time, but it was a focus for me, so I just kept thinking about snowboarding. And the natural question came up, “ok, but what are we going to do with it?” The answer was, “well, we could be a janitor at the mountain; just to get a pass.” So, I just did that at Mammoth Mountain and then built that all the way through to where we are today, which is pretty cool, man.

So, I’ve just been around Mammoth for years now. But when I first moved to Mammoth, I was a little timid and a little socially awkward, because you had all these cool guys there. But, I just had to get in there and kill them with action, basically, and I just adopted my own style and had to be true to who I was. And then I started really turning it up – hitting these massive 90-foot jumps – and I slowly became accepted. And that took me all the way until the mountain wanted to sponsor me. And that was my first ever sponsor, Mammoth Mountain.

Wait, so you were a janitor at Mammoth just so that you could get a pass? That’s awesome – dig in a little bit more on that.

Yeah, you know, I was a janitor at Main Lodge so that I could get that season pass, because that was the setup. And I was so stoked to be able to go ride all day long – and then suffer from 4 to midnight – and then wake up and go ride again. It was just anything to get up there. I didn’t really care what I had to do, as long as I was able to ride. And I did that for a couple of years – it was just snowboard all winter and then climb all spring, summer, and fall. And then right back into snowboarding all winter.

So, I made it from mopping the floors to getting hooked up by the mountain. And that was such a beacon for me to keep going.

One day I was just lapping the park, and this dude came and says, “the head guy wants to talk to you.” Here I was hoping I didn’t do anything wrong, but I went in there and the guy hit me with a sponsorship opportunity. Just like that, they gave me a pass and became my first ever sponsor. It was like, “wow.”

And, really, that one moment opened doors for opportunities to ride at so many mountains, like at Aspen while being filmed by a helicopter – which was always one of my dreams – and to be featured in a film while riding at Squaw Valley Alpine Meadows. That film at SVAM really helped open things up for me. Looking back on it, it really was one step after the other.

Absolutely. You put in the time, owned the passion, and sometimes – on the best days – that’s what can happen. Once you went pro, what was traveling like? Had you traveled before that? How did that open up your worldview?

Well, that’s what was crazy, because I don’t come from, like, a really wealthy family. We had lots of love and all that kind of stuff – no matter what. But I hadn’t really traveled anywhere, so by the time I got hooked up it was pretty intimidating. I mean, I picked up another sponsor, and there I was in Europe all of a sudden. You know, it’s hard to perform when you’re intimidated, but the people there were so kind and made us feel comfortable. So, pretty quickly, I started to feel more confident. Once you get that, you’re able to just unleash your skill – fly in a plane for 12 hours, get dressed, and go out and kill it.

Confidence is key, man. You’ve got to feel confident. Understand what you represent and what you stand for, and that will always give you the strength to perform anywhere in the world – and to get to that place is pretty dang special.

The stoke is just so high… I get to wake up every day and I wake up to that. That’s like the coolest thing in the world. To get yourself out on the mountain and recycle your energy. Because, you know, after you go have a great day of skiing or snowboarding, it’s still amazing after.

—
From mop buckets and park laps at Mammoth Mountain to stomping it at new destinations across the globe – including many Ikon Pass destinations – Lonnie embodies a life spent charging hard in the mountains. Beyond all of the travel, the steep crags, and big sends, it’s recognizing the next step of stoke that keeps Lonnie moving in the mountains. Join him next year and define your own moments of stoke with Ikon Pass.

The best price & the biggest savings of the 21/22 season are happening now. Claim your season of stoke and unlock renewal discounts, savings on child passes, and a new payment plan option at ikonpass.com. Prices go up May 5.