Tanner Hall Gets Candid About His New Film, Alcoholism and Skiing the Freeride World Tour

It’s lovely to hear Tanner Hall talk like a man obsessed. A man who’s come to terms with his past and is intensely-ready to put a stamp on the next chapter of his life. Hall was the leader of freeskiing’s lost generation: a group of hard-charging, super talented athletes that innovated slopestyle and halfpipe skiing before it was an Olympic thing. In fact, without Tanner and many of his peers, it could easily be argued freeskiing wouldn’t be where it is today–a mainstream, gold-medal attraction. But all that innovation took its toll. Hard-charging and hard partying caught up with skiing’s most innovative soul. The past year has been a good one for the Montana native. Last week, he released the trailer to his new film, Here After, and I was lucky enough to catch up with the “Ski Boss” as he heads into one of the most important winters of his life.

Talk about the last year making this film.

We started filming in January, all in Montana and filmed for three straight months. We’d go out every day and film where I grew up at some of the sickest spots I’ve ever seen in my life. It ended up being a wicked winter. It took me 34 years to see some of those spots. Right from there we went to Tahoe and crushed it, then to Alaska with Henrik Harlaut, and a friend I grew up with, a best friend since preschool, Luke Stahlberg. It was a wicked trip. Then went back to Tahoe, Sweden, and finished in Mammoth. It was just insane. We pretty much accomplished everything I really wanted to. It wasn’t easy but we were just in a zone.

What about the name, Here After?

Here After stands for everything I’ve gone through. There’s been a lot in the last five years. I was in a relationship in Tahoe that went south, I’ve been trying to battle with my alcohol stuff–in September, I’ll be 18 months alcohol-free. It’s been like that for a long time, and I’m still here after all the bullshit. This is my third time getting clean and third time’s a charm. But I now know how to work my body, what specific workouts I need to do, the foods I need to be eating. I did some heavy lifestyle changes and I’m the last man standing of a generation. I’m still “here after” everything. 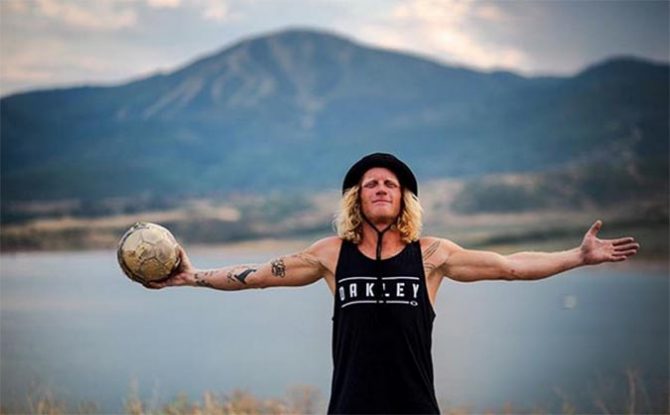 Training and sobriety are two of the most important aspects of Hall’s life these days. Photo: Dan Villaire/Armada Skis

So you’ve really gotten into the training aspect, which is crazy to see from you.

I was a kid that bagged on the gym when I was young. I was a little cocky and relied on raw talent. But you can only get away with that for so long. I turn 35 in October and I feel like that’s the tipping point. You get a little more tired, it takes longer to recover. I’m in the weight room all the time, now. I can take a hit and get up faster than when I was 21. I wonder what I could have accomplished if I’d been training like this all along? It’s not the easiest thing to do: eating good food and staying away from substance. It’s always around you. It’s not like it’s not fun to go out and drink beers but it’s an escape. (Drinking) wasn’t for fun with me. It was just for an escape and the older I got, all it did was bring me anxiety. Finding a way to get rid of anxiety is just healthier. The less anxiety I have, then I just think about skiing and the skies the limit.

I just read something on John Spriggs, who you’ve skied with, making a recovery. It seems like the ski industry has a way of eating up and spitting out a lot of people.

You gotta realize, you get in this type of lifestyle and there’s a lot of distractions: drugs and girls. At the end of day, the only advice I would give is stick to the course and always put skiing first and foremost. If you make it in the industry, you just have to realize what got you there. The girls, drugs and drinking will all be there, but you’ve got to make a choice for yourself and make skiing the number one priority. Skiing has given me everything, a great life. Partying almost took everything away. You have to be smart with who you’re surrounding yourself with. (My generation) even had kids that didn’t make it out the other side and passed away. Skiing is the priority. You can’t ski that well if you’re drinking all the time.

So going on the Freeride World Tour, everyone is excited to watch how you do. How much inspiration have you drawn from Candide Thovex, who made a similar transition?

Candide was in his mid-twenties. It’s a whole different thing in your mid-thirties. Skiing’s come a long way in so many years. Candide is one of the best skiers in the world so you’re not gonna think that about yourself. I definitely look to Candide for a lot of inspiration but this has nothing to do with following his path. Everyone has his own path and this is what I feel is like the last tidbits of my competitive path and if I do well, it’ll be a great cap for my career.

Do you get butterflies thinking about standing at the starting gate of your first event on tour?

I get butterflies, of course, but I also get really hyped. In slope(style) and pipe if you make one tiny mistake you’re f*****. You won’t have enough speed. I’m used to being straight-up perfect. In big mountain, there’s a little bit of room to play around with. Maybe not though, to win one of these contests you gotta be perfect as well, but I’m just trying to correlate the two. I’m just stoked, life is good again and I’m ready to compete.

Here After is set to be released October 1 with showings in France, Lake Tahoe, and Kalispell and Whitefish, Montana. Follow Tanner, here, for details.