The Origins of Snowboarding in Whistler

Standing in Whistler village, it’s hard to imagine what this place would have been like before it blew up into one of the largest resorts in North America. A variety of different groups would have first occupied this land ranging from the First Nations people to miners and pioneers looking to create a new lifestyle using the resources around them. And it took pioneers to develop the ski industry here as well.

Looking at the effects Olympic Games had on host cities around the world, a group of businessmen from Vancouver came together with the hopes of developing an area for skiing that could be incorporated into the 1968 winter games. The spot chosen was London Mountain, which would be renamed Whistler Mountain for the association it had with the whistling marmots that lived in the area. While the hopes of the 1968 Olympics would not come to fruition (until 2010 anyway), the resort would open to the public in 1966. The area would see turbulent growth as the region rapidly expanded. This would pave way for another resort adjacent to Whistler: Blackcomb, which opened in 1980.

Infamous terrain features like the natural quarter pipe and wind lip sections at Blackcomb were the platform for experimentation in the freestyle realm, pushing the sport to new levels.

Around this time a new winter industry was emerging and making waves – snowboarding. Acceptance from the larger community (i.e. skiers) was nonexistent so snowboarders found themselves categorized as the black sheep, the rebels, and the punks of the industry. They were virtually banned from all resorts in Canada and around the United States but nonetheless, by the early 1980’s this new sport was beginning to emerge as a viable winter pastime thanks to innovators who continued pushing boundaries. 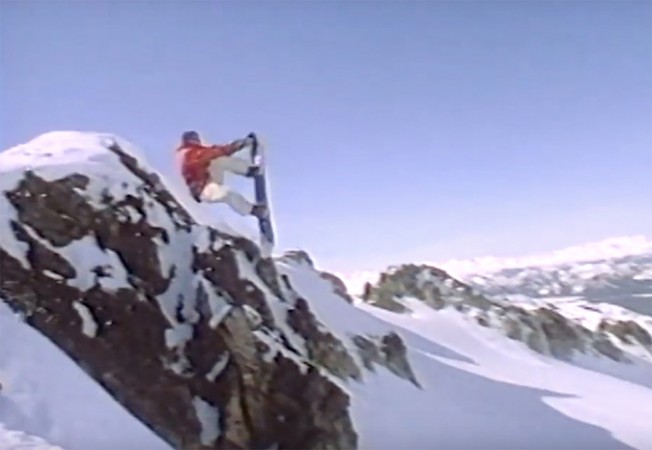 A group of bold visionaries arrived in Whistler in 1988 and worked to create acceptance at the resort, eventually tapping into Blackcomb where they were allowed to ride that same year. Canadian snowboarding pioneers like Ken Achenbach, Doug Lundgren, Alex Warburton and others created a brotherhood of riders that stirred up the snowsports world and attracted even more riders to the area. While skiers mainly stuck to a generic style of riding, snowboarders embraced creativity, finding natural features and adding tricks and radical techniques to the act of making turns. Infamous terrain features like the natural quarter pipe and wind lip sections at Blackcomb were the platform for experimentation in the freestyle realm, pushing the sport to new levels.

That’s why Transworld SNOWboarding’s Origins video, released earlier this year, is so important: it’s a snapshot of a critical time in the sport’s history and does an excellent job of capturing the evolution, and the role Whistler played in it. Watching the archival footage and hearing the original stories gives the sport context in this region of the world, one that played an important role in snowboarding’s development. While the magic of snowboarding has reached the far corners of the globe, remembering the humble beginnings is a necessary step to attempt to make sense of this ever-evolving art, especially at a time when the industry desperately needs to rediscover its roots.