These brothers from sleepy Oakville, Ontario, hundreds of miles from the nearest saltwater, are the chief visionaries and evangelists of freestyle riverboarding. You’ve never seen anything like it because nobody else does anything remotely similar on big, surging river waves. At least not on boards.

As soon as the ice breaks in the spring, bringing some of the world’s most dynamic river waves to life, Tom and Jon are out there in 5-mm suits and two pairs of long johns, innovating aerial tricks inspired by sports like skateboarding, BMX and, especially, freestyle kayaking.

The brothers swear they weren’t raised by a Sasquatch but their childhood was one continuous adventure in the rugged Canadian outdoors. Tom, 24, experimented with riverboarding as a grom, playing in flooded creeks on a cheap bodyboard from Canadian Tire (a northern version of Wal-Mart where you can also buy snowmobile parts) and later as a raft guide on the Ottawa River.

One day his boss at the raft company pointed to a pile of bodyboards and told him he would be guiding tourists down the river on them the following day. The Ottawa is home to some of the biggest river waves in the world, and after hours Tom set about discovering the limits of what he could do on them.

He quickly recognized the limits of the commercial boards and promptly embarked on a five-year creative bender to shape the ideal ride for big frothing river waves. He added more rocker to make his boards easier to spin, and a toggled ‘board whip’ handle, too. He estimates he’s shaped between 30 and 50 boards and is finally satisfied enough with his designs to start selling them. He launched his website and riverboard lifestyle brand, River Veins, last week.

The progression really took off when older brother Jon, 27, joined in.

“We tend to push each other, we’re competitive but we build off each other,” Jon says. “It really helps to have a second person out there.”

“When I introduced Jon to the sport I improved exponentially,” Tom says. Big airs and board releases are the foundation of their freestyle philosophy, influenced by the natural surge and retentive foam piles found on giant river waves. The brothers have developed and refined a repertoire of tricks, from board flips and whips to Jon’s Mind Warp and Tom’s signature Airscrew Sparta, an aerial flip that finishes by stabbing the board into the water. They do all this while dodging ice and driftwood and performing the odd animal rescue. 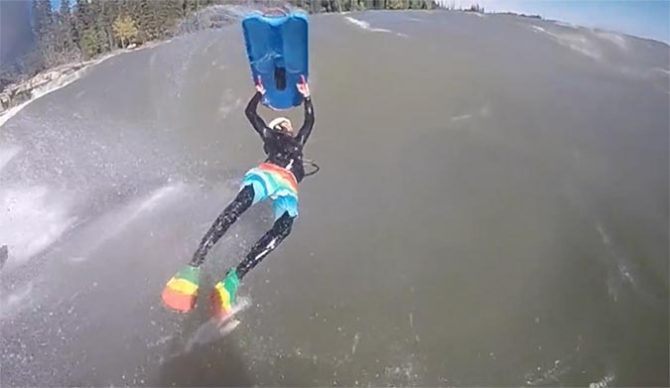 The boys also take inspiration from other sports. “Tom first tried an air screw because he saw kayakers doing it,” Jon says. Once the brothers figured out how to generate air, they looked more to skate and BMX.

“We’ve been asking ourselves how to take those skills that were so impressive to us into the sport we love,” Jon says. “But for me, my favorite part is just a feeling of being out there on the wave. It’s there all day and it feels like you’re flying on water.”

That points out a fundamental difference between river surfing and surfing in the ocean. When a river wave comes in, it’s in session for days or even weeks at a time. There’s little competition for waves. And when it’s good, it’s always good.
“If it’s just me and Jon or a bunch of friends, we all pile on that wave and surf around each other,” Tom says. “It’s more fun to be on the wave with someone else. That’s pretty unique to the river, I think.”

To get that kind of amplitude the boys start on all fours, assuming a doggy-style position that ocean-bred spongers find unconventional, to put it mildly. That’s okay. The Paterson’s don’t care what you think. There’s no room for orthodoxy in a brand-new sport, and the evolution of riverboarding is all about air.

As for style, the Patersons will make their own, starting with trunks over their suits.

“A lot of the time we’re in really dark-colored water and it’s very easy to lose each other, so we wear as much bright-colored clothing as we can for safety,” says Tom, who usually rocks Rasta-patterned trunks that match his signature fins. For his part, Jon never rides without his purple short shorts.

Though summertime is a trunks-only paradise in Canada, the big waves come during the spring melt when water temps are in the 30s or 40s. Tom remembers days that were so good, and so cold, that he was slurring his speech after a five-hour session. Now they have more rubber and a system of sorts. “It’s been a progression how to battle the cold,” says Tom, who relies on layers of long underwear, a 5-mm suit, neoprene socks and a skull cap to keep hypothermia at bay. That, and nonstop action.

“Once we’re in the water we don’t stop moving, and if we stay moving we can surf for four or five hours,” Jon says.

When the Canadian rivers are under ice, the boys work overtime to build a nest egg that will keep them surfing through the spring and summer. Tom works construction by day and spends nights shaping and developing his new riverboard brand, Earth Veins. John’s situation is a little more buttoned-down. He’s a swim coach at a local pool.

When the creeks around Oakville start to flood in March, the brothers get restless. By April they’re in the Ottawa Valley, living out of Tom’s beat-down Honda CRV, following the melt from southern Ontario into northern Quebec. Last year they fell in with a crew of professional kayakers who travel the same river-surfing circuit.

The kayakers were their connection to the world’s best river wave, a glassy 15-footer that runs for weeks at a time. The Patersons were part of the crew that discovered the so-called Dream Wave last summer on the Nelson River, 80 miles from the nearest road in the middle of Northern Manitoba. Getting there took 40 hours of driving and three long days in whitewater rafts. Even then, the brothers stared at the wave for 24 hours before they felt ready to drop in.

In addition to that 15-foot face and a 10-foot pile of froth crowning the left side of the wave, Dream Wave is guarded by a recirculating hydraulic the size of a house, plus acres of big whitewater and random whirlpools downstream.

“It was intimidating to be looking at something that big,” Tom says. “But once we finally got on the wave the fear dissipated. I can’t wait to go back.”

The ice is melting. Let the progression continue.