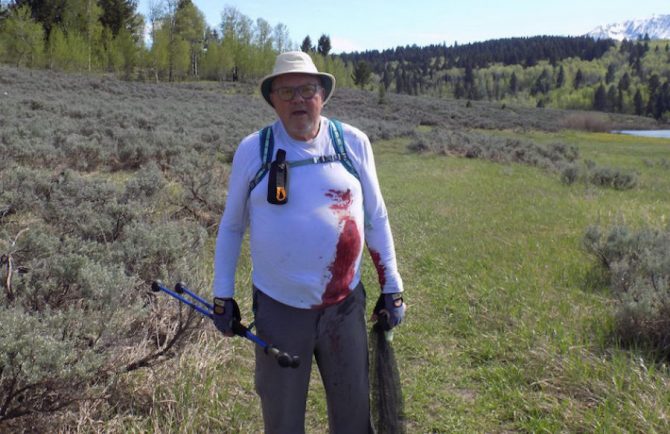 This man is a stud. Photo: Courtesy Gregory Godar as provided to East Idaho News

Grizzly bears are beautiful beasts. But they’re also one of the more dangerous animals inhabiting the U.S. (ocean or land), killing on average about two people every year. Thankfully Gregory Godar didn’t become one of those statistics last week.

Godar, also known as “Thor” among friends, was hiking with his wife on the Aspen Trail at Henrys Lake State Park in Eastern Idaho near the Wyoming and Montana borders when a grizzly bear savagely attacked him, scratching his back before rolling him over and puncturing his stomach with its teeth and claws. “We were doing everything right,” Godar wrote on his Facebook page. “Bear bells, bear spray on my chest strap of my pack, first aid kit, poles, talking loudly, etc. Suddenly, I heard noise on the right side of the trail and saw two cubs cross the trail behind me. Probably year olds. Mama bear is staring at me from 20 feet away in the aspens and brush. About 450 pounds? She charges straight at me. Pauses for a split second, deciding how to attack. I tried to get my spray out (but couldn’t) and toreador around her, but she whacked me on the back sending me down hard.” You can see the gruesome puncture wounds, here.

Godar covered his neck, thinking the bear would go for the kill shot next but then something extraordinary happened: it got up and walked away. Godar’s wife, Sherry Groves, released bear spray in the animal’s direction as the couple made their getaway. “We pretty much assumed she would attack again, and we had to walk a mile and a half back to the park entrance station expecting she’d charge at us,” Godar told the East Idaho News. “On the way down, we warned a lady walking her dog that there was a grizzly up there, and she didn’t believe us but then turned around and left.”

Despite the attack, Godar kept an extremely positive attitude, telling friends on social media afterwards, “I want all my Facebook buds to know that I am the poor bastard who was attacked by a grizzly bear.” When he got to the trailhead he was descended upon by an army of medical and park authorities. “Once the bear got off of me, and I could see I might have a shot at getting out of there, I was very happy because I thought I wasn’t going to die. I was pretty cheerful through most of it,” he said. “But my heroic wife, who helped me hustle out of there, she was hyperventilating and felt like throwing up. We were both scared the bears were coming back.”

Godar was released from a nearby hospital but reportedly had to see a wound specialist in Bozeman, Montana. His advice when moving through bear country: “I don’t think I will ever put (bear spray) in a holster again. I’m going to hold it in my hand.”