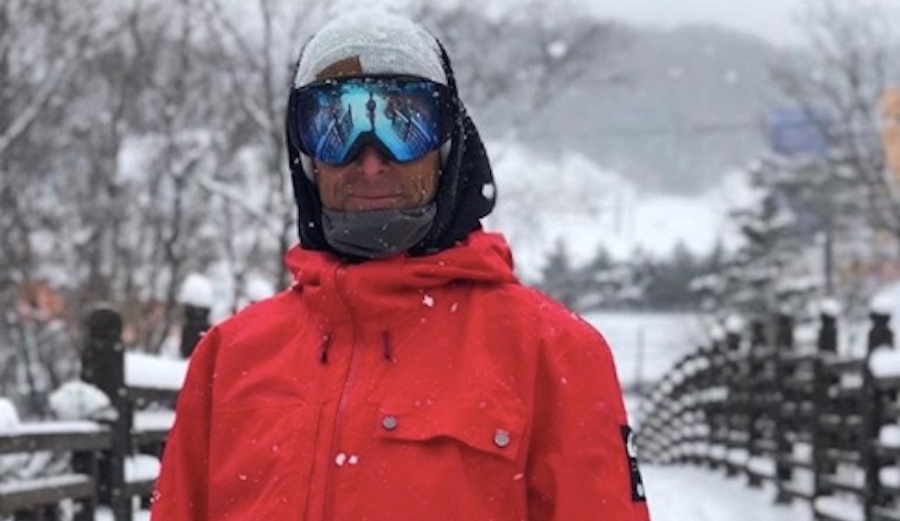 “I call this one, standing on bridge in snow farting.”-Todd Richards Photo: Jonny Moseley/Instagram

Winter Olympics fever has reached a, well, fever pitch. On Wednesday (from 5 pm-8 pm PST) athletes from every country will participate in all the pomp and circumstance that is the opening ceremony, and you can bet our eyes will be collectively glued to the screen for a number of events thereafter – ehm, Curling.

For a while now, snowboarding legend Todd Richards has been the resident man in the booth for all things snowboarding on NBC, offering up color commentary to ma’ and pa’, breaking down the mechanics of quad cork 1800s for folks who’ve never seen snowboarding much less ridden one in their lives. If you haven’t kept up with Todd’s behind-the-scenes antics, we recommend you give the guy a follow on Instagram, but having seen them we decided to hit him up to paint a picture for all of us stuck stateside of the scene in the run-up to the Games:

The courses are looking amazing here. So many options for these champs.

Todd! How’s everything over there in South Korea? What’s the level of anticipation like over there?

It’s really fun over here. Lots of preparation work going on for the big show, but I have had time to sneak in a few days on the hill and the surf has been pumping at the coast so that’s always fun to sit and mind surf. As always, with every Olympic Games, the anticipation level is the highest right before the whole thing starts. Once Opening Ceremony concludes and the Games officially start, I kind of just go into cruise control and we bring the action to you non-stop for almost 20 days.

So you’re doing commentary for all the men’s and women’s snowboarding slopestyle, superpipe, and big air for NBC right? What are your nerves like knowing this is maybe going to be a bigger audience than for traditional snowboarding events on NBC?

This will be my 4th Olympics with NBC. At this point, it’s old hat. I honestly like the pressure. It reminds me of standing in the starting gate at a contest knowing that you have to bring it to get the cookie at the end. The only real change from how I approach commentating at the Olympics is I try and tone down the inside lingo. We are showing snowboarding to a much wider and mostly uneducated audience. My job is to entertain while educating the new viewers on what to expect and what they are seeing. I picture my mom’s friends watching for the first time, and dedicate a portion of my commentary to explaining everything in relatable terms to them. Sometimes the “core” audience gives us grief for constantly repeating what rotations are, what goofy vs regular is, what grabs are and why you need them, but I want everyone watching to grasp what is happening and that includes someone’s grandmother that has never seen snowboarding before.

This is Shaun White’s fourth Olympic showing, Chloe Kim’s first at age 17. What are some of the most interesting storylines folks at home should know going into the Olympics?

As far as interesting story lines, I would say Shaun’s quest for that third gold medal isn’t going to be easy. Ayumu and Scotty are going to make him really work for it. I don’t think it’s a given that he will go home with that gold. On the women’s side of things I think that Chloe’s biggest challenge is going to be managing all the hype and media attention that comes with being the G-medal favorite. It’s the Olympics, anything can happen and that’s the best part.

What are some of the most interesting observations from South Korea so far?

Well, the topography is a lot like Vermont. Just the way the trees are and the size of the hills really remind me of East Coast shredding. That being said, it’s pretty awesome. The Phoenix Park (where most of the snowboard events are held) has the biggest and best park set up in South Korea. There is a lot of fun packed into a very small ski area. The best part for me is, unless you have the super gnar Olympic credentials, you can’t get on the hill. The hill has been closed since early January, and there was some seriously fun pow to be slashed the other day. I dig the food, but I have a feeling kimchee is going to get old by day 24.

Any medal predictions?
Obviously Shaun is in the mix. The big question: what color is the medal going to be. Chloe is going home with hardware, so is Jamie Anderson. Other than that it comes down to who has eye of the tiger on contest day.

For more from Todd Richards, check out this piece that was part of our CREATORS series: