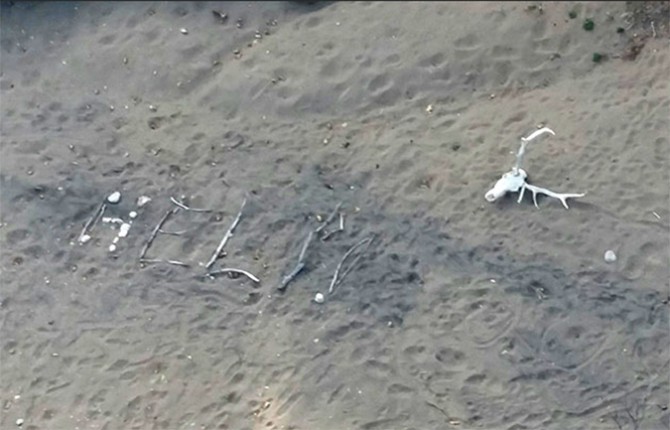 What is it with using nature’s waste lately to spell out SOS messages? A women lost for nine days in the Arizona wilderness after her car broke down on a remote backroad alerted authorities searching for her in the air by writing ‘HELP’ with sticks.

Seventy-two-year-old Ann Rodgers, tough as nails we might add, became lost after her hybrid vehicle ran out of gas and electricity while traveling on the remote road in the White Mountains of Eastern Arizona. She set out hiking, apparently to try and find better cell phone service and became extremely disoriented on March 29 and wasn’t located until April 9 after her dog was found by a tribal officer. By then she’d been surviving on desert plants and pond water. “I was eating desert plants. My dog was too, diving into clovers and finding all the places that were the easiest to go,” she told a local news station. 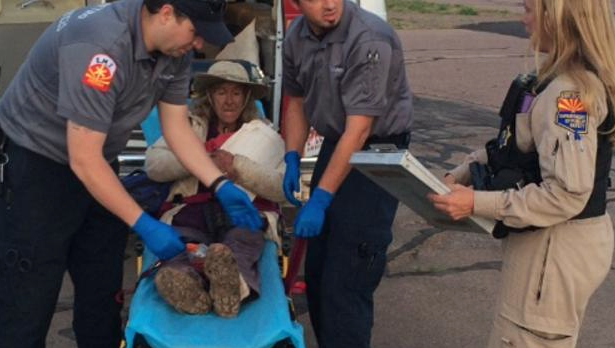 Searchers found her message from air and were able to locate her soon thereafter. She left a handwritten note as to where she was headed and had a signal fire going somewhere on the Fort Apache reservation when she was located. She reportedly collapsed in the dirt in tears when the helicopter landed. Ironically, this incident happened at the same time that three men were rescued on the deserted Micronesian island of Weno after their skiff overturned and they were stranded, writing out ‘HELP’ in the sand in palm fronds. The island is a few hundred miles north of Papua, New Guinea.

The grandmother was traveling from Tucson to Phoenix, a straight shot on Interstate 10, so it isn’t clear how she ended so far off route and she has yet to make a public comment beyond what she told the news station when she was first rescued. After being found, Rodgers was taken to a hospital in Payson where she was treated for exposure before being released.