X Games Real Ski, which for the last three years existed in the realm of backcountry skiing, finally features urban skiing. The “Real Series” from Winter X allows action sports athletes to compete in specific domains of their sport that can’t be tested on a manicured course at the base of Buttermilk. Nominated athletes compile footage of their exploits in that specific genre and then make a 90-second edit. The winner is decided by a panel of judges but the fan-favorite is determined by internet voting.

I guess the X Games got tired of Sammy Carlson winning the Real Ski Backcountry competition (three-times in a row!), so perhaps they decided it was time to make the switch to urban.

Urban skiing has become one of the most technically difficult avenues of freeskiing, and its received little mainstream love outside of movie segments. So, kudos to the X Games Real Series to pick up on the talent and popularity incased in this side of the sport. While its safe to assume that most who vote in the Real Series competitions are already familiar in whatever niche they are featuring, the fact that urban skiing is about to be unleashed on more casual fans is a beautiful thought. Street skiing has progressed quickly over the last decade, and the progression is rarely, if ever, featured in any sort of competition.

All six of the participants are veterans of urban skiing. Some of the best to ever do it. The youngest competitor, Clayton Vila, is 24; the same age as the second oldest participants in all other freeski competitions at Winter X. Vila burst onto the filmmaking scene recently and actually won the 2016 Powder Award “Movie of the Year” for his documentation of the life of an urban skier, made in conjunction with TGR.

The Real Series is essentially honoring skiers who’s fame and popularity has been achieved through many, many video segments, not for amassing X Games medals (except for the pretzel man himself, Mr. Tom Wallisch).

In terms of other competitors, Will Wesson rose through the ranks thanks to his collection of webisodes entitled “Traveling Circus.” His originality and pure dedication to creative, urban-based skiing is bar none.

JF Houle, tied with Will Wesson for oldest participants (29), has been slaying urban features since Tanner Hall was on top of the freeskiing world. Houle even managed to win himself a European X Games Gold medial in 2011.

Ahmet Dadali, who should be a fan favorite thanks to his persona (the majority of his segments over the years have featured deep-track hip-hop and really baggy pants), will probably bring the most style to this year’s Real Ski competition. He’s an ultra-smooth rider who’s skills translate well to video. 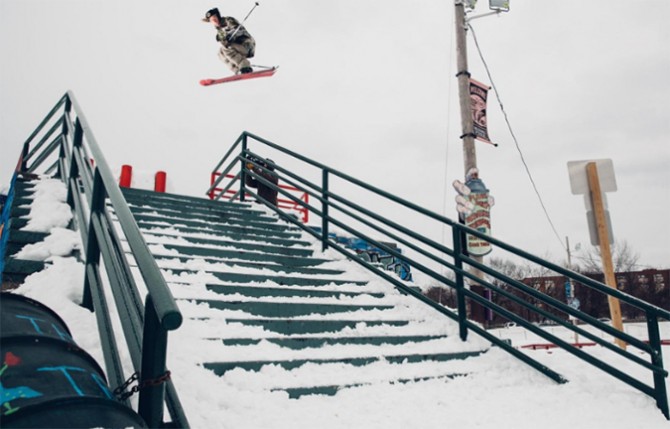 Cam Riley has been a mainstay in Stept films over the years. He won the if3 “Best Street Segment” in 2014 for his role in Ten and Two. Clearly he has the capacity to star in an award-winning edit, so I wouldn’t be surprised if he placed well.

Last but definitely not least, Tom Wallisch. The Pretzel Man, a nickname given based on his supreme ability to jump onto a rail one way and spin off in the opposite direction, rose onto the scene by winning the Level 1 Superunknown segment years ago. Probably more than anyone else in skiing history, his starring in viral skiing videos sparked a successful competition career. Don’t let his nice demeanor fool you, Wallisch absolutely slays urban features.

I’m beyond excited to see who emerges on the podium. I never thought a dedicated urban skier such as Ahmet Dadali could add an Xgames medal to his trophy case, but thanks to the people beyond the Real Series competition, we may see that happen.

Sidenote: four out of six of these guys hail from the East Coast. I guess the lack of blower powder and cliff drops forces East Coasters to sharpen their rail skills.

You can watch the videos and vote here. You have until February 21st at midnight.