BLM Protests, COVID-19 Beach Protests, and What They Say About American Inequality 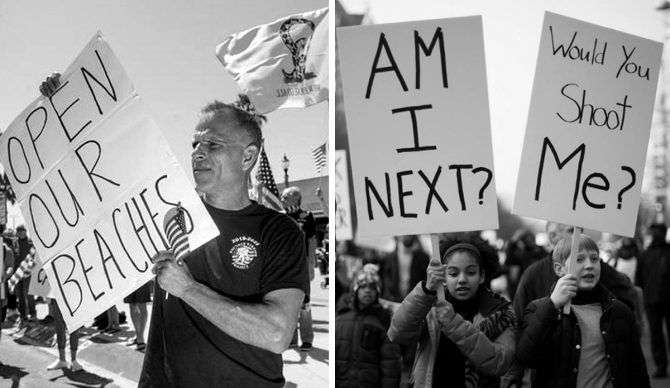 Six weeks ago, Americans marched with signs that said things like “Commies Can’t Surf” and “Give Me Waves or Give Me COVID.”

Right now, Americans are holding signs that ask “Am I Next?”

That’s powerful. It speaks volumes. It’s undeniable proof that even though we all live under the same Bill of Rights, we often live in two Americas.

It’s a stark contrast of what different people see as injustice, and one of the many beautiful privileges of living in America is having an opportunity to speak against those injustices. Still, it’s time for us to have a talk about the gap between those protests because they are absolutely connected to class and race in this country. It’s time for us to be honest about how those protests are perceived and dealt with based on the people they represent.

First, to be fair, showing up for lockdown protests in April doesn’t qualify as racism. Neither was protesting California Governor Gavin Newson’s decision to close Orange County beaches in May, following a weekend of thousands defying shelter in place restrictions. But it is self-serving outrage when those protests by-and-large include a struggle to protect things that are objective pleasures — the pursuit of happiness, part of our trio of inalienable rights — and any social media post and news coverage made it clear those battles were prominently fought in upper-middle-class communities by predominantly white citizens. Meanwhile, the people who have been most adversely affected financially by lockdowns and whose health is at greater risk by exposure in America are minorities. Even in April, and certainly by the beginning of May, we knew securing privileges for some by standing on flimsy interpretations of the constitution was in direct correlation to creating greater risk for minorities. But please, let my people go surfing.

Today’s protests, however, are represented by people of all colors in a wider range of communities, including some of the same communities where lockdown protests first started, like Huntington Beach. This fight is to protect life, where the stakes are a bit higher than pursuing happiness. That is privilege. And that is inequality. Served up for us to watch on TV just six weeks apart. Where one exists, so can the other, and inequality is both fuel for racism as well as a shield that protects it. The point isn’t that being in a privileged group is wrong. It’s not. This isn’t an indictment, it’s just reality. Too often the word privilege accurately articulates the different experiences we all have based on race, but too often that word is where those conversations are stifled.

So the universal agreement right now — the first time in a long time all Americans have found something they can all get on board with — is that we need to put an end to systemic violence perpetrated on people of color. In particular, black men are significantly more likely to be unjustly killed by police than any other community in America. Will we cure hate and racially-permissible violence by throwing our hands up and saying “Ok, I give in, I’m privileged!” No. But we definitely won’t make progress without at least that simple step.

In April, that group of first amendment exercisers stood for more than going to the beach, of course. Their signs also demanded haircuts. Getting back to beaches and surfing were just pieces of their larger tyrannical lockdown pie. And when armed men in the same series of April protests marched on their capital building in cities like Lansing, our president encouraged those armed men with a “Liberate Michigan” tweet. They arrived with police waiting in their typical patrol uniforms, equipped for nothing more than business as usual.

This week, that same man called U.S. governors to tell them they’d look like “a bunch of jerks” if they failed to “dominate” protesters. By-and-large, Americans understand the difference between the people peacefully demonstrating in support of the Black Lives Matter movement and the people who provoke and incite what becomes opportunistic looting. But the same Twitter account that championed the liberation of Michigan has no mention of that nuance in more than a week of protests across the country. Instead, 240 characters at a time, we’re reminded of nothing but the violence surrounding it and definitely never applauded for the encouraging displays of unity between protestors and police.

Even in the context of an entirely peaceful silent protest of kneeling during the national anthem years ago, the president scolded NFL athletes, called them “S.O.B.’s,” and demanded their bosses fire them. Again, a stark contrast when last month’s debate du jour was…going to the beach. Recapturing some “normalcy.”  Protesting when you’re speaking on behalf of the privileged is both encouraged and celebrated as a great American pastime, upheld by a sacred 250-year-old piece of paper. In fact, bring your Second Amendment-safe protection rifles to the party. But doing so as a person of color or somebody who stands beside them is…well, it doesn’t matter the method, you’re going to be told you’re doing it wrong. And when you show up at a police station to yell about it now, they will already be dressed in riot gear before the first rock is thrown. Gaslighting 101 and Systemic Racism AP rolled into one high school history course.

This is nothing new though. And that’s part of the frustration, obviously. The actions of a minority group are never judged on an objective scale. And where and how we’re allowed to honestly point at all the inequality that exists is exactly why we find ourselves in a cycle of sadness, outrage, and the expected return to this normal. Consistently chalking it up to “It’s just a few bad apples” in these moments overlooks all the seeds of racism’s nuance that society plants for those apples — everyday injustices, inequalities, privilege, and even unspoken intolerance. Like, for example, The Inertia losing nearly 350 Instagram followers by supporting #blackouttuesday, a coordinated social media agreement supporting the Black Lives Matter movement shown with silence and a single black box — a gesture that we’re willing to listen instead of give in to our universal impulse to always be heard. When we are taught or allowed to believe racism only exists in its most tragic displays, it’s really easy to overlook that it even brews in the sea, a place people profess turning to as an essential “escape.”

But what do we do to battle that nuance? As a minority, I know it’s present every time I’m pulled over, no matter the reason, and a police officer’s hand is already at their hip when they reach the driver’s side door. On a good day, the first question isn’t if I have any weapons or drugs. To the opposite end of the spectrum, a minority is reminded of their skin color every time they’re complimented by how “articulate and well-spoken” they are. The unspoken message, depending on the tone, can be “I didn’t expect that from you.” For our younger generations, it’s being suspended 9.3 times the rate of white classmates in San Diego schools, or the fact that something like property taxes charged to the people you live near will decide the quality of education you have access to. None of these things have to be born of hate, but they certainly contribute to the moments a person can be unjustly murdered by a peace officer. That bad apple sees somebody who is less than human because our society reinforces that belief in everyday life. Period. Our work to fix these things is generational.

I’d argue we’re lucky BLM protests have come while lockdown protests are still fresh in our memory, rather than years apart. We’ve been reminded some Americans get to protect all inalienable rights — life, liberty, and the pursuit of happiness — while others are still fighting to secure just one.