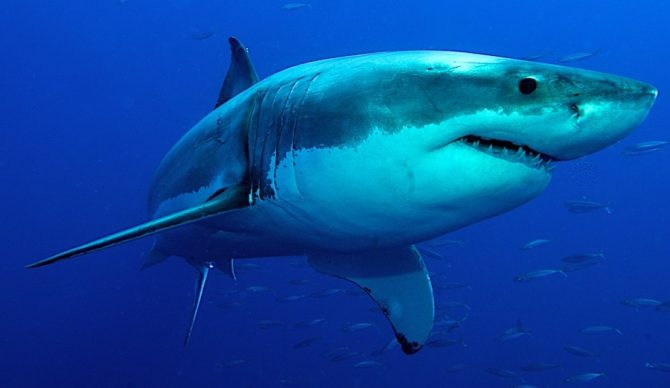 A team of graduate students in the Shark Lab at California State University Long Beach started studying the apex predators soon after they arrived in Del Mar, California, in 2019. The size and stability of the population, which the team of experts identified as an aggregation, is substantial.

Program director Dr. Chris Lowe told The Coast News Group that the team has tagged just over 200 animals in the group, including “around 65” this year, on bi-weekly trips to the area.

To tag a new great white when it joins the group, the team first finds it with a drone. One student told The Coast the tagging process itself is quick and relatively un-invasive to the animal, similar to piercing a human’s ear. The team uses a long metal pole to insert the tag just below the animal’s dorsal fin.

Shark Lab is looking for another Post-doctoral fellow to join our team working on our white shark research project as part of the State of California Shark Beach Safety Program. https://t.co/bMLzlJaUFS pic.twitter.com/XT5G75iAfb

Once the team tags a shark, they start monitoring it with dozens of Bluetooth receivers placed inshore and offshore. Basically, the receiver registers when a tagged shark swims by and logs the data, which the team periodically collects. Through that data, researchers have developed some grasp of the sharks’ movement patterns and habits.

The animals live in big groups at popular beaches from Del Mar down to Torrey Pines State Beach, so the researchers have found they spend a lot of time in very close proximity to swimmers and surfers.

But contrary to what you might think, the volume and proximity rarely result in confrontation. Reports show that since the aggregation started three years ago, only one swimmer has suffered a bite — on Nov. 4, likely from a juvenile great white, The Coast reported.

Meanwhile, some sharks frequent the area heavily. The team’s data shows that some individuals have “pinged” on the underwater receivers over 100 times.

Why are the sharks sticking around in such big numbers? Researchers have found several key reasons.

Lowe said that his group thinks juveniles (under nine or 10 feet long on average) first come to the area because its warm, shallow water attracts them and provides safety from large predators. Then, he told the outlet, his team thinks the sharks end up staying there because of the ample food sources in the rocky reefs.

For so many sharks to remain in the Del Mar area for such a long time is rare. So, the lab is working on determining what’s keeping them around specifically. The Inertia contacted Lowe for comment, but he couldn’t be reached before publication.

In the meantime, the Shark Lab has kept itself busy through grassroots initiatives to help locals better understand the marine predators.

Over the summer, the lab held educational “Shark Shacks” at beaches throughout Southern California, including several in San Diego County. And on July 30, the team held its first “Shark @ the Beach” event since 2019. There, the team focused on transmitting the details of its research to the public with help from a presentation by Lowe.

The team also works to study the impact fishing exerts on the sharks. One team member said that “targeted fishing practices” mean sharks face more danger from humans than humans do from sharks.

Since the aggregation has appeared, the outlet said, several sharks have been discovered trailing large hooks and long fishing lines, which can kill them.

“Within one week of us finding that aggregation, 40 percent [of the sharks] had signs of fishing injury,” Lowe said.

That could change next year. On Jan. 1, 2023, a new California state law designed to protect sharks will go into effect. The new regulations prohibit the use of shark bait, shark lures, or shark chum to attract a white shark. Anglers also may not place those items into the water within one nautical mile of any shoreline, pier, or jetty when a white shark is “visible or known to be present.”

“This bill will help reduce fishery interactions with white sharks, helping the protected sharks and ocean users by reducing the risk of hooking these sharks at public beaches and ocean piers where people are swimming, surfing, and diving,” Lowe said in a California Department of Fish and Wildlife statement.

If the well-known Del Mar aggregation stays put, it’s easy to imagine the new rules will help it further thrive.