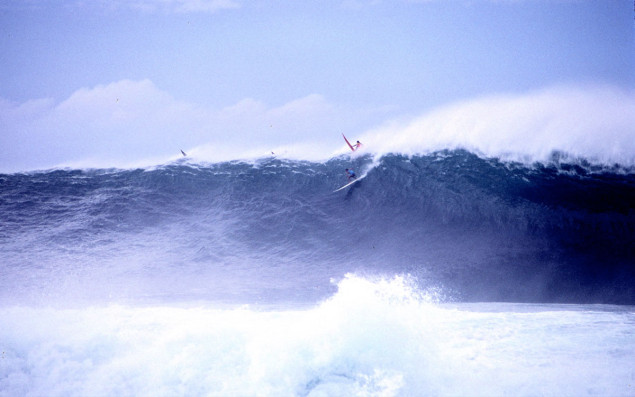 The Pacific Ocean is pissed. In fact, more than she’s been all winter. And I know what you’re thinking: “Green light, schreen light. We’ve all heard this before.” Two weeks ago, we were on call for the ninth running of the Eddie Aikau, only to have it all called off the morning of. Hundreds of disappointed on-site surf fans were sent home with there heads hanging low, not to mention the rest of the world who was hoping to get a piece of the online streaming action.

So what’s different about this swell? Well, for starters, it’s bigger. Much bigger. And most importantly, it’s headed straight for the Hawaiian Islands (unlike the “No Eddie” swell on February 10th, which tracked more towards the US West Coast).

In a recent update given on Tuesday evening, Surfline forecasters stated, “The latest satellite pass through the storm has revealed seas of 45-50′ located at 175W / 40N, or around 1500 miles northwest of Oahu. This is a bit above model guidance and appears well aimed at Hawaii. The latest swell model guidance (18z) looks very similar to what we saw earlier today and, in fact, there has been only minimal variation in swell model guidance over the past 24-30 hours (~.5 feet of deepwater swell), which is a great sign. Overall confidence continues to increase that we’ll see solid 20′ surf (30-40’+ faces) throughout the day at the Bay, and the likelihood of closeout sets in the 25′ range (45-50′ faces) is also increasing.”

Still, the final decision to run will be made by event organizers on Thursday morning.