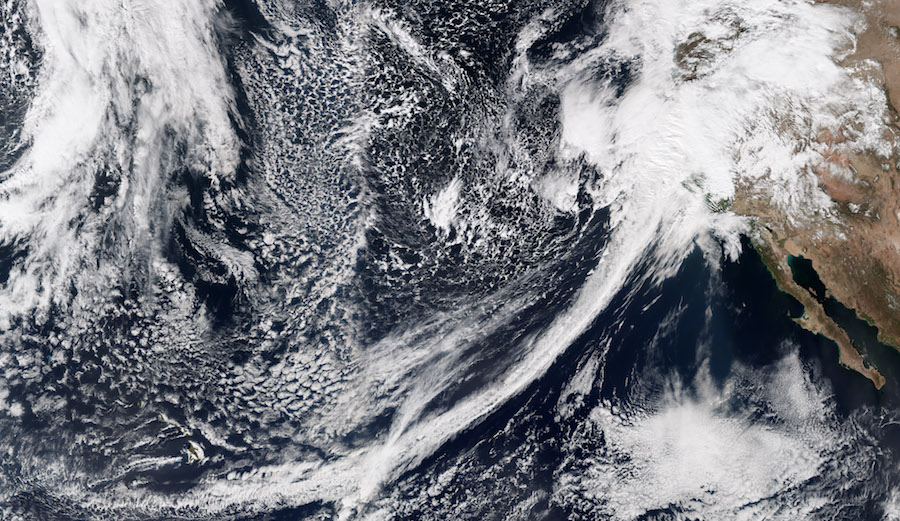 An atmospheric river is set to dump two to five feet of snow in the Sierra this week. Photo: NASA Earth Observatory

To say it’s been an especially wet winter across the West Coast is putting it mildly. Areas like Los Angeles are still soggy, and in the Sierra, Mammoth Lakes got some 10 feet of snow in four days. And the hits just keep coming.

An “atmospheric river” is currently set to dump even more snow in the mountains on Wednesday and into the weekend, and it’s proving especially “chaotic” to forecast.

In a National Weather Service, Reno report, one forecaster wrote, “This has been one of the most chaotic forecasts of my career with many adjustments and changes made to the existing forecast.”

According to Zach Tolby, a meteorologist for the National Weather Service, the difficulty comes with two colliding weather systems.

“There’s a bunch of warm, subtropical moisture coming into California and the Sierra,” Tolby told the Mercury News. “At the same time, cold air is dropping in from the Gulf of Alaska. With those two things meeting somewhere around Central California, it is creating a lot of challenges. Is one going to push the other away? Is warm moisture going to dominate? It’s creating a lot of challenges for precipitation amounts and snow levels.”

As it stands, current estimates for the highest elevations in the Sierra are calling for two-to-five-feet to blanket the mountains. But unlike the dry fluffy stuff that’s fallen in weeks past, this round is going to be wetter and heavier, a type of snow often called “Sierra Cement.”

The storm is also forecast to bring with it heavy winds ranging from 20 to 40 miles per hour with gusts up to 65 miles per hour in valleys, according to an NWS Reno tweet.

A major winter storm will affect the Sierra Nevada and western Nevada Wednesday-Thursday. How long the storm lasts, snow levels and the resulting impacts are questions that remain to be answered. Stay tuned to our latest forecast at https://t.co/ppyB2NAsT8 pic.twitter.com/2MjqvWfmi2