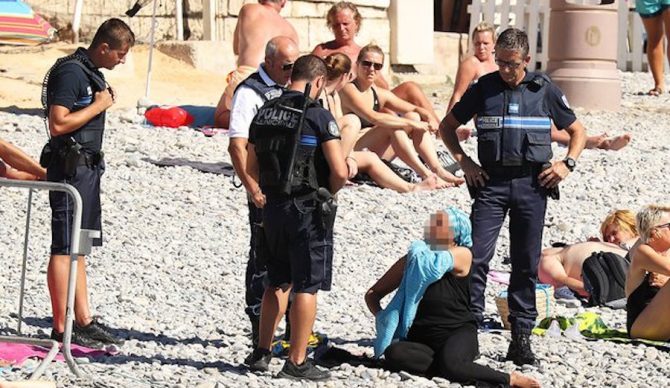 French police asked a burkini clad sunbather to remove her clothes in Nice. Photo: The Guardian

Nice is nice, as my french professor used to say. But apparently it ain’t all that nice to Muslim women who seek to soak in the sun seaside whilst maintaining their code of moral decency – a code, I might add, they’re not thrusting upon other people either.

Following a string of 15 French towns that have banned the burkini – a coverall swimsuit specifically designed to get wet, but also cover the head and body – French police recently approached one sunbathing woman in Nice, asking her to remove the garment, reports The Guardian.

Images show police confronting the woman who’s lying unthreateningly on the rocky shoreline. The four officers are photographed conversing with the woman, who then proceeds to remove her tunic. One officer was also seen taking notes or maybe issuing a fine, according to reports. French news agency, AFP, also reported the woman received a ticket explaining that she was not wearing “an outfit respecting good morals and secularism”.

“The saddest thing was that people were shouting ‘go home’, some were applauding the police,” said Mathilde Cousin, another beachgoer. “Her daughter was crying.”

This is not the first newsworthy instance of French officials enforcing these controversial bans among seemingly average and unthreatening Muslim citizens, and likely won’t be the last. According to The Independent women were recently fined €38 each for wearing burkinis on the beach in Cannes.

“They are young mothers or grandmothers, and they do not believe they are criminals,” a local council told The Independent. “All were very upset at the way they were treated.”

French city officials have been quick to justify the enforcement of such draconian measures as a matter of national security. Cannes Mayor, David Lisnard, defended himself earlier this month saying, “I took this decision among several other rulings to make sure my city is safe in the context of the state of emergency.” And the different beach towns to follow suit have expressed similar logic. It remains unclear, however, how exactly any form of beachwear could be viewed as a threat to public safety.

France, of course, has been the victim of several high profile terror attacks in recent years. There was the Charlie Hebdo shooting in January 2015, the attacks across Paris that November, and, most recently, the truck attack in Nice that killed 85. Understandably, tensions are high as the country seeks to mitigate the potential for another attack.

But being that in each of the attacks mentioned, disillusioned people clung to an extremist interpretation of an otherwise peaceful religion because they felt either alienated, unwelcome, or hopeless, it remains questionable whether part of the answer is to make Muslim women feel even less welcome by ostracizing them over their choice in beachwear.

One UK artist took to Twitter to express her discontent with a simple cartoon. It depicts one woman with a bikini and swim cap accompanied with ‘Oui’ (yes), second is a woman in a wetsuit (also ‘Oui’), and third is a woman in a burkini with the word ‘non’ or no.

Seems like a fair point. A hooded suit is basically a burkini, right? 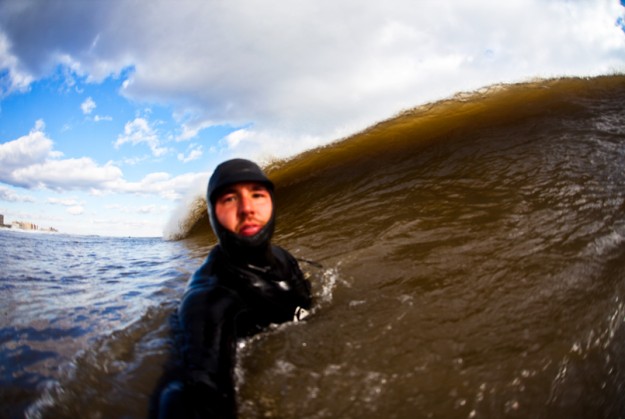 In the winter NJ locals are basically in surfing’s answer to the burkini, right? Photo: Ryan Struck