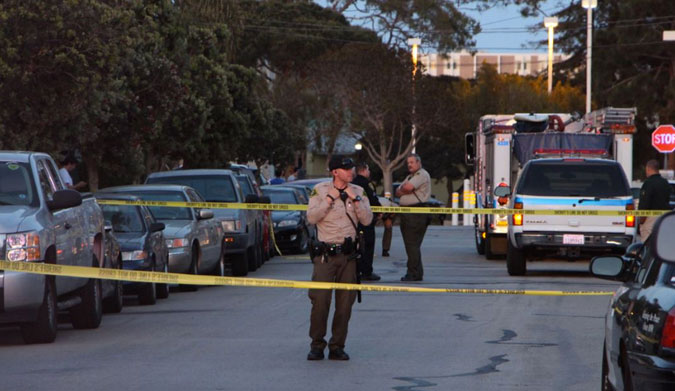 Police have taken two suspects into custody in the second campus shooting in a year. Photo: KSBY/Zach Warburg

Less than a year after the horrible rampage that saw the death of six UC Santa Barbara students and one suicide, the small community of Isla Vista has bee shaken by violence again. Thousands of UCSB students live in the same mile-square area known as I.V., and the shootings that took place there early this week are highlighting the sadness and tragedy they’re all still enduring.

Students flock to UC Santa Barbara from all over because it’s a beautiful place with a lot of life, a lot of energy. With less than a twenty-minute drive from campus to the lineup at Rincon, UCSB is one of the most popular “surf schools” in the world. It’s a university that is at the top of the list for college bound Surf P.E. Juniors and Seniors, but parents are likely thinking twice about sending their kids to a school that’s now appearing in our headlines under tragic circumstances.

After the shooting on Monday night, two suspects have been apprehended. According to reports, Jose Guadalupe Gutierrez, 19, and 22-year-old James Taylor wound up in a fight with two UCSB students that ended up with shots fired. The two students were taken to hospital with gunshots to the chest and stomach, and are both expected to recover.

The shooting is stirring flashbacks of the spree that made national news last May. One theme seems to be consistent with the people in this town–they don’t want Isla Vista to be characterized by the violence that keeps bringing them more news trucks, more fear, and more loss.

Heartbroken our community will be in the news for another shooting. Especially after our wounds are still healing a yr later #gauchostrong

The fact that this community has to say "not again" is horrible, shooting people is never the answer #gauchostrong #notonemore

Hate hearing about another shooting in #IslaVista. Stay aware and stay safe everyone. #GauchoStrong #IVStrong #UCSB

Why is Isla Vista becoming the next Juarez?