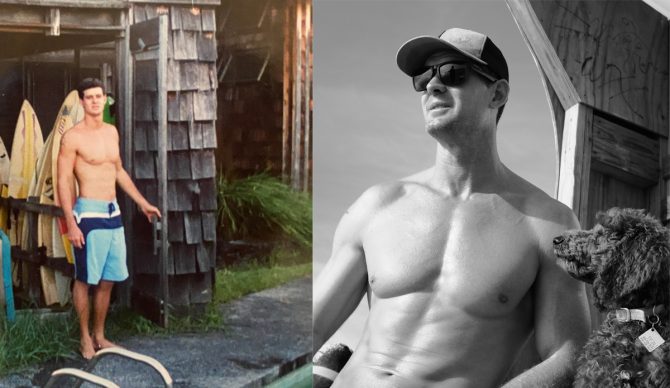 Jeremy Owens attended the University of Hawaii at Hilo before moving back to the U.S. East Coast, where he served as a Wrightsville Beach lifeguard for two decades. Photos courtesy of the Kamaron Goodrich//Dave Baker.

The term hero gets thrown around all too often these days, but the East Coast lost a real-life hero this week as Jeremy Owens unexpectedly passed on to the next life. He was the head lifeguard at Wrightsville Beach, North Carolina, a Jiu-Jitsu instructor, an actor who played the Headless Horsemen in Sleepy Hollow, and firefighter captain. Jeremy touched so many not only by setting a relentlessly-disciplined example for others, he also saved numerous lives during his 20-year tenure at Wrightsville Beach’s Ocean Rescue squad. An avid surfer growing up in Virginia, he relocated to Hawaii for nearly a decade where he made quite a name for himself on the Jiu-Jitsu mat as well as in the lineup during winter swells.

“My parents gave him a sailboat for high school graduation, he didn’t actually know how to sail, but he left the East Coast and learned along the way to the Bahamas,” said Jeremy’s sister, Kamaron Goodrich. “He lived there on his boat doing odd jobs until he was accepted to the University of Hawaii at Hilo.”

When he returned to the East Coast, Jeremy brought with him his newfound Hawaiian vibes and superior skills in the water, which he then shared with everyone who would come into his world. A genuine legend, larger than life at 6-foot-4, and built like Dwayne Johnson, he was still as gentle as a lamb. Jeremy was so beloved that the news of his passing has brought a flood of love and support, with people from all over the country reaching out to his family.

“I met him ten years ago when I was a rookie lifeguard,” says fellow guard, Sidney Corn. “He taught us so much about the ocean and staying calm under pressure, but most of all he taught us how to live, have fun, and enjoy life.”

Aloha Jeremy, we are all a little stronger because of you. Legend.

Jeremy Owens’ memorial service is on Saturday 11/21/2020 at the Wrightsville Beach Fire Department. The family is asking anyone who plans on attending to remember a mask, maintain social distance, and only come if they don’t have symptoms. There are also plans to broadcast a livestream of the service for those who can’t attend.