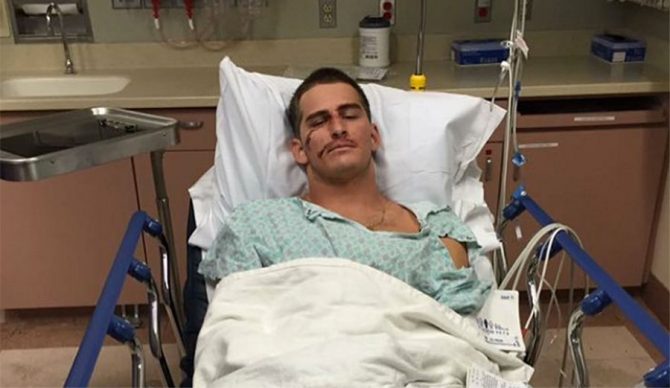 Doctors discovered he has a rare disease that triggered the seizures and stopped his heart. Photo: @Kalanidavid_

Kalani David is one tough dude. A true badass, indeed. And as if you needed another reason to back this belief, this one takes the cake. While skating Prince Park in Oceanside, California yesterday, Kalani suffered three seizures, fainted, and smashed his face on the concrete. What’s even worse: his heart stopped.

“So my heart stopped and they brought me back, but I’ve had three separate seizures since the initial incident.”

“I was working on a run, and right after I finished my run I told my friend, ‘I don’t feel good. I feel really weird,’” David told SURFING. “That’s the last thing I remember, but I guess right then my heart stopped and I fell over, smashed my face on the asphalt. When I woke up I was in the ambulance, then I passed back out. When I woke up the next time I was in the ER.”

As it turns out, doctors discovered that Kalani has a rare disease called Wolf-Parkinson White Syndrome, which means there’s an extra electrical system in the heart, causing an extra muscle to form on his heart. Although he’s doing well for the time being, David is scheduled to undergo open-heart surgery to remove the muscle growth.

We’re wishing Kalani a successful surgery and a speedy recovery so he can get back to doing what he does best: dropping jaws.