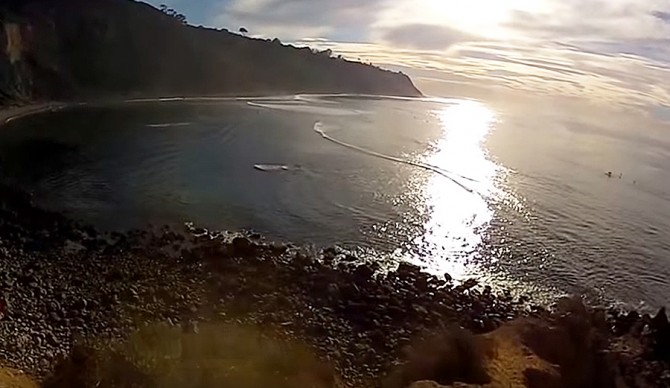 Earlier this year the Bay Boys of Lunada Bay found themselves in headlines without throwing a single punch or rock. When The Guardian published a story with hidden camera footage of the Bay Boys using their intimidation tactics on a visitor and the less than urgent response from a Palos Verdes Police dispatcher, we were all reminded that localism still thrives at Lunada Bay. While the actions of the PV locals weren’t a major surprise to many, the story added pressure to the Palos Verdes Police Department and their new Chief.

“They are pretty much grown men in little men’s mind-set,” the dispatcher said in the hidden camera video. “They don’t like anyone who isn’t one of the Bay Boys surfing down there. It literally is like a game with kids on a schoolyard to them, and they don’t want you playing on their swing set. It is what it is. If you feel uncomfortable, you know, then don’t do it.”

Now, as a new year approaches and Lunada Bay is seeing waves again, local police say things will be changing around the infamous surf spot. “I’m not so naive to believe that we can solve this instantly or overnight,” Police Chief Jeff Kepley said. “It took 50 years to get here. Hopefully, it won’t take that long to resolve, but I think it’s very important to get the word out as aggressively and enthusiastically as we can that the status quo is going to be mixed up around here.”

Kepley says one of his hopes in changing the status quo will be to make their first arrest of a Lunada Bay assailant in years. “We will make an example out of anyone who behaves criminally down there,” he said. He’s added patrols near the bay and ordered overtime for his police force.

But there are still critics who will wait to see before believing. Sef Krell filed a complaint with police after being harassed in the water last year, but says detectives didn’t follow up and the case still remains unsolved today. “Doing a drive-by of the bluff when there aren’t any waves isn’t going to do anything,” Krell told the Los Angeles Times. “The chief needs to put detectives on the cliff in plainclothes when there is going to be swell. And they need to do what any other police departments do: real field investigations with suspect descriptions and names and phone numbers.”