Police Planned a 2016 Lunada Bay Sting Operation, But It was Foiled 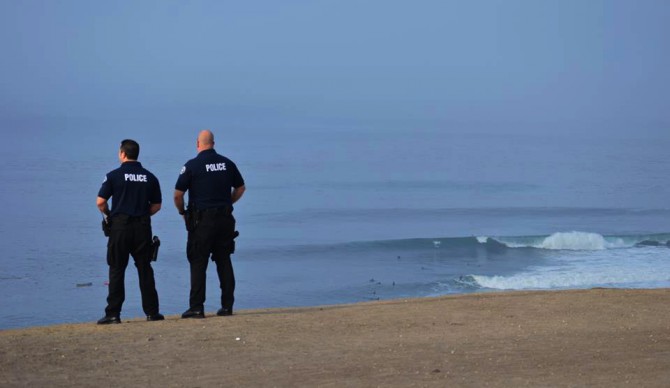 If one needed any more proof of how ridiculous and out of hand the Lunada Bay “localism” situation has become, here you go. On one hand, we have grown adults that bully, threaten and torment unrecognized faces. Ridiculous. And on the other hand, we have actual public servants and resources that have been dedicated to trying to get the Bay Boys to act like, well, actual adults. Equally ridiculous.

The latest news from the Palos Verdes Peninsula reveals that a sting operation was planned for February 2016, but was called off when somebody tipped off the Bay Boys. I’m pretty sure the last time a cop went undercover to bust surfers he ended up walking down the Manhattan Beach pier with a neon funboard. Of course, Johnny Utah was hoping to thwart murderous bank robbers – some real serious stuff. This sting was set up to make sure real live people could start being nice to one another. Tax dollars.

In court documents uncovered and reported by the Daily Breeze, it was revealed that Police Chief Jeff Kepley began putting the pieces in place for a sting operation at the surf spot in late 2015. By February, the operation was set to go off with the help of Santa Monica police. Only it was called off just a day before when City Manager Tony Dahlerbruch got word that “there might be some type of sting operation,” according to a resident. Dahlerbruch reached out to Kepley and the operation was canceled “to protect the officers,” Kepley said in his deposition. The Daily Breeze report says less than half a dozen city employees were even aware of the operation, but Kepley said the leak could have come from any Los Angeles county police department, as he’d made his plans known at a police chiefs meeting in 2015, hoping other departments would be able to help. And according to a 2016 police memo recovered by the Daily Breeze, the official stance on the matter is that the Bay Boys were tipped to a possible sting “by unknown means.”

So there we have it, the situation at Lunada Bay and the lawsuits that have made it all a national story (and embarrassment) now have one major commonality with Point Break. The only difference is that Point Break was incredibly cool.

As a side note from the Breeze’s story, court documents also revealed that an estimated $50 million has been lost to the city from access to the wave being cut off to most surfers since 1970. Philip King, an economics professor at San Francisco State University, measures the economic recreational value of beaches for the California Coastal Commission. He estimated that as many as 75 surfers should be paddling out at Lunada Bay on a given day, while the Bay Boys have managed to keep that number down to about a dozen through the decades. Truthfully, few surfers would ever complain about having 85% fewer bodies to compete with at their favorite wave, but $50 million is at least 2.4 houses in Palos Verdes dollars, so I imagine authorities now have an incentive to keep the ridiculousness that is Lunada Bay under control.