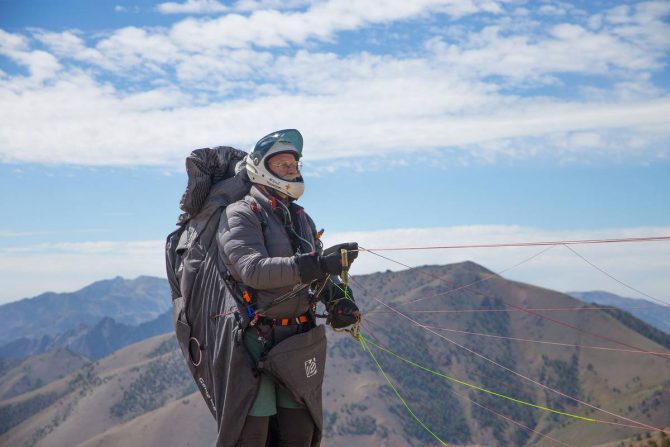 James “Kiwi” Oroc is a legend in the flying community. Photo: GoFundMe

James “Kiwi” Oroc, a New Zealand-born paraglider and journalist has been missing in Nevada since Saturday, according to reports. A prominent figure in the U.S. paragliding scene and regular contributor to Cross Country and Free Flight magazines, Oroc was last heard from flying over Eureka County, Nevada, where his tracker pinged at 14,500 feet, according to Cross Country magazine.

“He was flying with two other pilots, who raised the alarm when the Kiwi didn’t get in touch that Saturday evening,” reads the magazine’s report. On Sunday, the two other pilots searched along his likely course line while search and rescue teams scoured the area below his last tracker ping. The search widened on Monday to include air support and has resumed today.

Searchers are working with the theory that he may have been separated from his tracking device while at altitude and are searching within nearby Nye County as well. Search and rescue teams are being supported by paragliders and pilots from the free flight community who took to the skies just hours into the search. Rescue efforts have been hampered by smoke from the recent fires in both California and Nevada. Time is of the essence with storms set to roll in today.

my first US Nationals in Chelan Washington 1996 on my beloved Pro Design Contest.

A GoFundMe page had already raised over $64,000 USD to support the search and cover fuel costs for the pilots, over a third of the $150,000 goal. Jet fuel isn’t cheap. The page describes “Kiwi” as a big, friendly personality who’s colored the paragliding community for 30 years. “Originally from New Zealand, he lived in Jackson Hole (Wyoming) and more recently New Orleans in between flying adventures.” He was a part of the 2011 search efforts when fellow paraglider Xavier Murillo went missing in Perú, and wrote about the experience for Cross Country magazine.

Oroc’s website describes him as a “journalist, photographer, and artist” who “has been pursuing and reporting on the cutting edge of extreme sports in more than 40 countries around the globe” since 1998. A longtime member of the Burning Man community, Kiwi blogs about culture and has written three books on psychedelics.