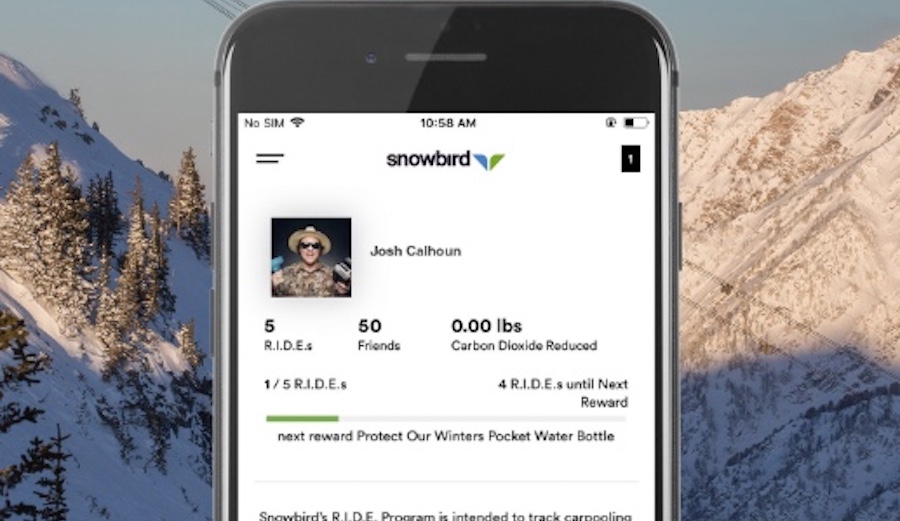 Powder days in Utah’s famed Wasatch Range can be magical. “Can be,” being the operative words. For those who have tasted a fresh foot or two of the Greatest Snow on Earth®, there’s nothing better. Still, getting to one of the four resorts adjacent Salt Lake City on a powder day can test the patience of even the most zen powder hound. Traffic often slows for miles, and if there’s an accident forget it.

The traffic problem in both Little and Big Cottonwood Canyons may be an inconvenience to avid shredders, but it’s also an environmental concern, which is precisely why Snowbird is pioneering a new carpool app called Snowbird RIDE, to curb congestion and tailpipe emissions.

Drivers on their way to shred can log in to the app and report how many open seats they have in their vehicle. Then carpoolers can request a ride and designate a pick-up point. Users earn points from carpooling they can then redeem at the resort including on merchandise and half-price tickets, explains KSL. People who ride the bus can also earn points.

“We can calculate, based on that particular car and model, how much carbon is being reduced by you driving up the canyon and you can track that throughout the year,” said Brown. “You can see that at the end of the ski season kind of an immediate difference you made in the environment.”

Snowbird has reportedly been working on the app for a year and a half and saw 309 rides on its first day.

According to a 2018 University of Utah study, some two million people visit Little Cottonwood Canyon each year. And on peak days, more than 6,600 vehicles and 12,400 people travel to the canyon. Researchers behind the study argue the canyon road “is facing catastrophic traffic congestion.”

In the study, the 17-member team of University of Utah engineering students came up with a list of $200 million worth of recommendations to mitigate traffic including avalanche sheds, road alignments, and better exits from resorts.

Whether Snowbird’s new app will play a role in reducing traffic to reasonable levels remains to be seen. But it’s certainly a novel approach as we know how crowded the place can get: