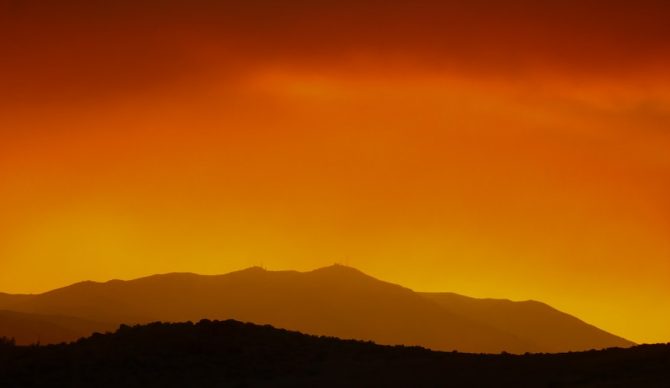 The Caldor Fire took a turn for the worst today, barreling towards South Lake Tahoe and forcing widespread evacuations. Cal Fire Amador-El Dorado posted the most up-to-date evacuation orders (below), with a map showing all of South Lake Tahoe under mandatory evacuation.

The city of South Lake Tahoe is one of the most populous in the Tahoe area with over 21,000 residents and according to SFGate many of those residents are currently stuck in gridlock traffic as they do their best to evacuate. According to The Sacremento Bee, Barton Memorial Hospital in South Lake Tahoe had been evacuating its patients to nearby facilities since Sunday night, and all patients have since been safely moved from the area. 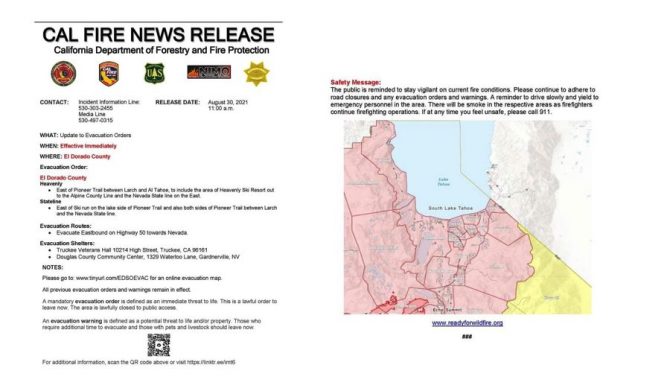 CalFire reports that the fire has burned 177,260 acres in El Dorado County over the past 15 days and is currently 14 percent contained. Five people have been injured and 478 structures are confirmed destroyed, though that number is expected to rise. Twenty-five helicopters, 353 fire engines, 77 bulldozers, and 3,684 firefighters have been deployed to fight the fire. 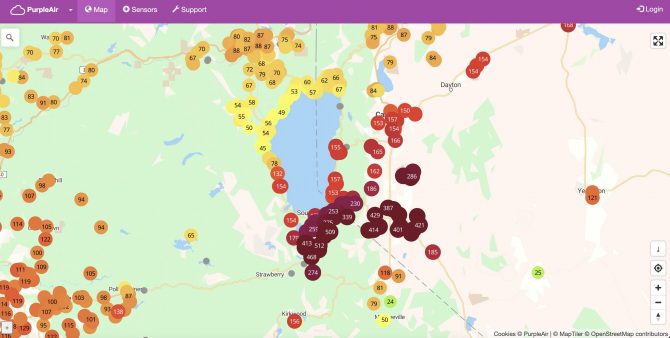 Popular air quality monitoring website PurpleAir showed air quality around Lake Tahoe varying greatly from one side of the lake to the other. As of 2 p.m. today, South Lake Tahoe saw Air Quality Index numbers of 250-300, and Meyers, just a bit further south, saw up to 517 AQI. Numbers above 100 are considered unhealthy. To the north, Incline Village and Truckee saw more moderate numbers in the 80-100 range. Most ski resorts in the South Lake Tahoe region have closed summer operations, with the Sierra-at-Tahoe resort fully within the evacuation zone. Firefighters have been using the resort’s large parking lots as a staging ground for vehicles and equipment.

“Everything is burning different today. We’re seeing movement like we saw about 15 days ago,” Cal Fire operations section chief Eric Schwab said on Sunday evening. “A couple days ago I really felt like we were turning the corner with it… To put it in perspective, we’ve been seeing less than a half mile of movement on the fire’s perimeter for the last couple weeks each day. Today, this is already moved about two and a half miles with no sign it’s about to slow down.”

Red flag conditions signifying critical fire danger should persist until at least Wednesday, including high winds and the potential for triple-digit temperatures. “This is not good. My best to all the South Lake homies. Getting my Go Bag packed now just in case it turns towards us up North,” Lake Tahoe local and professional freeskier Cody Townsend posted to his Instagram story.

Our thoughts are with all of those currently dealing with the effects of the Caldor fire and all fires currently burning in the Western U.S..

Support those affected by the fires by donating to entities like the American Red Cross and the California Community Foundation’s Wildfire Relief Fund.