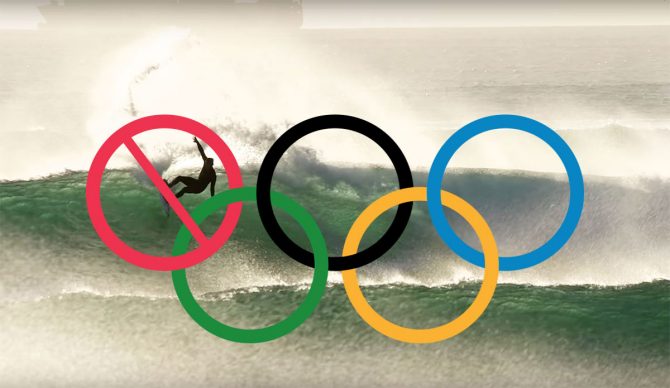 In the past 24 hours, the 2021 Tokyo Summer Olympics – where surfing is set to make its debut – has gone from a second cancellation in less than a year to being “on” for the July 23 opening ceremonies. On Friday, a story in The Times out of Great Britain first reported that the Japanese government was preparing to cancel the summer games for the second year in a row due to COVID-19 and were instead looking to secure a hosting role for the 2032 Summer Games.

“No one wants to be the first to say so but the consensus is that it’s too difficult,” an anonymous source was quoted in the story. “Personally, I don’t think it’s going to happen.”

By the end of the day, officials from the International Olympic Committee and Japan had responded, saying there was “no truth” to that sentiment.

“It’s wrong and it’s ridiculous even having to comment on this,” Japan Olympic Committee head Yasuhiro Yamashita told Reuters.

The Games organizing committee doubled down on the denial by calling the Times’ report, “a tabloid-like story” with countless other Olympic officials all echoing that the Games will be a go on July 23, 2021. (They also chalked up the Times story to “ridiculous gossip and rumors.”)

Can Japan and the IOC do it, and still debut the plethora of new sports planned like climbing, skateboarding, and yes, riding waves? According to the Associated Press, that may depend on vaccinating a good portion of the country’s 127 million citizens for the Coronavirus — a process the Japanese government hasn’t begun and one more than half of the population isn’t confident in. A Lancet study of 149 countries published in September has Japan ranked as one of the world’s lowest in vaccine confidence, with less than 25 percent of people agreeing on vaccine safety, its importance, and effectiveness. Meanwhile, Prime Minister Suga insists hosting the Games won’t be dependent on inoculating the public.

“We will prepare for a safe and secure Olympics without making vaccination a precondition,” Suga said.

“It is inappropriate to push vaccinations to hold the Olympics,” Dr. Tetsuo Nakayama, a professor at Kitasato Institute for Life Sciences, told the AP. “Vaccines should be used to protect the people’s health, not to achieve the Olympics.”

So, how does that bode for surfing’s Olympic debut?