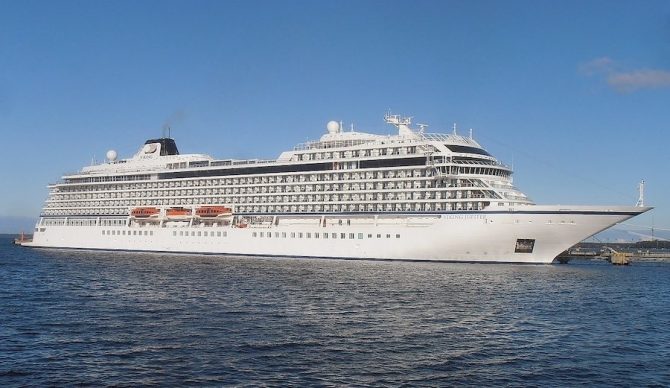 One passenger died, and four others suffered injuries when a rogue wave hit a Viking cruise ship bound for Antarctica on Nov. 29.

“It is with great sadness that we confirmed a guest passed away following the incident. We have notified the guest’s family and shared our deepest sympathies. We will continue to offer our full support to the family in the hours and days ahead,” the company said in a Dec. 1 statement.

According to the Associated Press, an unidentified 62-year-old woman from the U.S. was killed when she was “hit by broken glass when the wave broke cabin windows late Tuesday during a storm.”

The Viking Polaris vessel was heading towards Ushuaia, Argentina, near the southern-most point of South America as part of its Dec. 5-17 “Antarctic Explorer” itinerary. Viking said the ship sustained “limited damage” and reached the Argentinian port city without further incident on Nov. 30.

Viking described the four other passengers’ injuries as non-life-threatening. They received treatment from the ship’s onboard doctor and medical staff.

Rogue waves, or “extreme storm waves,” are over twice the size of surrounding waves, “very unpredictable, and often come unexpectedly” from a different direction than prevailing wind and waves, according to the National Oceanic and Atmospheric Administration (NOAA). It added that the waves are “extremely rare.”

One passenger spoke to the unexpected nature of the swell.

“We wondered if we hit an iceberg. And there are no icebergs out here, but that’s how it felt,” passenger Suzie Gooding told WRAL News. “Everything was fine until the rogue wave hit, and it was just sudden. Shocking.”

Viking said it’s working to arrange return travel for guests and crew on the voyage.

“We are investigating the facts surrounding this incident and will offer our support to the relevant authorities. Our focus remains on the safety and wellbeing of our guests and crew, and we are working directly with them to arrange return travel.”

USA Today reported Viking canceled the rest of the Polaris’ Antarctic itinerary.  As of this writing, Viking has not confirmed that reporting to The Inertia.