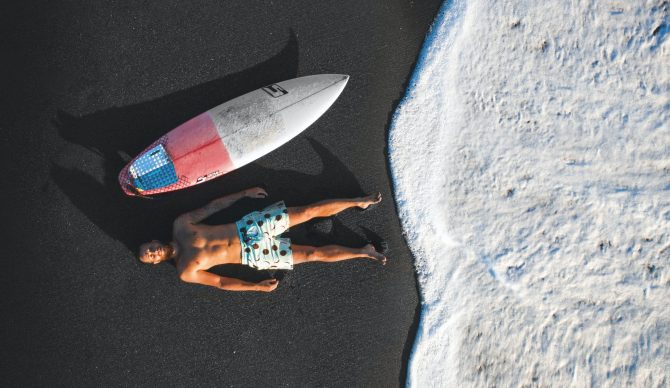 Surf etiquette, like the English language, isn’t always synonymous with common sense. As a community, we teach and practice a lot of contradicting value systems that come closer to something like “falling in line” than true etiquette. And we come up with shallow justifications for many of our obvious shortcomings. Or as I like to put it, surfers do and accept a lot of things in a daily lineup we’d be embarrassed about in the real world.

Somehow, for example, violence is considered a reasonable response when somebody gets burned. Two wrongs make a right, surfers figure, so let’s teach a lesson to the guy who almost injured somebody by…injuring him (never mind the only thing that ever got hurt in the first place was somebody’s ego). And don’t get me started on localism, the give-respect-get-respect web of illogic that outsiders are begrudgingly tolerated at best in my backyard, but the second I hop on a flight to Costa Rica I should rightfully be welcomed with open arms because Pura Vida, baby.

And one of the most exhausting tropes reinforcing our many ass-backward thought processes tops my list of most annoying things people can say: “Surfing Is a Selfish Pursuit.”

I rank this one above “keep politics out of ___,” “the ocean doesn’t care if you’re ____,” and “surfing is a religion, not a sport.” All of these are dumb. I roll my eyes at them. But that eye roll is more exaggerated with the suggestion that surfing is selfish, which has really just become a convenient sidestep to logic.

“But when I’m staring down the line it’s just me and the wave,” you oh-so thoughtfully retort.

But do you know why that response came so instinctively? Because you’ve heard it so damn much. And hearing it over and over doesn’t make it right. Or even rational. The fact that an act can be solitary — riding a wave — does not make “well then it’s selfish” the next step in logic. Running is also solitary. We don’t strategically block other runners from a narrow sidewalk, barking them out of our way as we jog. My body is the only one being sustained when I eat a steak, but grilling them with friends is a helluva lot more fulfilling than enjoying one alone. Only one person takes a shot on the basketball court. Funny enough, it’s universal to hate the ball hog and instinctive to admire a generous teammate. Yes, in the real world, basically anywhere outside of a lineup, we know selfishness is bad. Meanwhile, we know (but ignore) most of the stuff done (and excused) in the name of catching a wave that makes us assholes or lunatics if done on dry land.

“When I see a (pro) surfer get that faraway look in his/her eye before puking out the gratuitous ‘surfing is a selfish pursuit’ throwaway into a lavalier mic, I vomit slightly in my mouth. As if the thought is novel, valuable, profound, or useful in the slightest,” a friend said to me after a surf this week. “It’s not. Surfing isn’t selfish. Or, if it is, it’s a projection of the speaker’s demons. Not the activity itself.”

Riding a wave is just fun. That’s all. It’s good, clean fun if you’re not back-paddling, yelling, scowling, and snaking those waves along the way, possibly ruining somebody else’s day so you can get one more. And it’s laughable to think that we are groomed to accept all those petty actions as just part of the game when the actual pursuit is for something meant to produce joy. Repeating “surfing is selfish” to justify it all is just cutting off your nose to spite your face. It’s sticking to the idea that waves are a finite resource even though, objectively, they aren’t. There will always be another wave, some people just get fixated on having that one…and the next one. And the one after that.

So the next time you’re tempted to drop the “surfing is selfish” bomb in a casual convo, reconsider just how casual the played-out one-liner is. Because surfing isn’t selfish, but maybe you are.