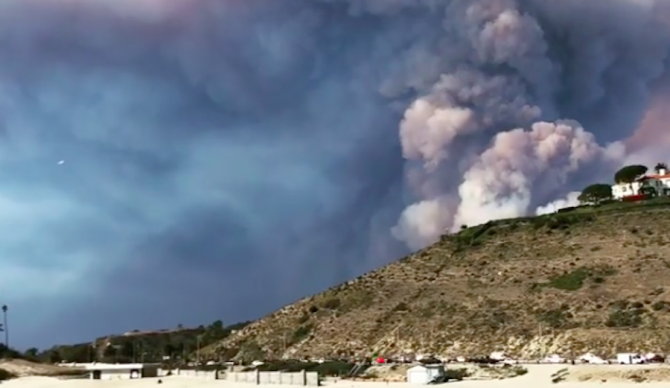 Since record-keeping began for such things in 1932, California has seen nine of its 10 largest wildfires since the turn of the century. Compare that to 13 of the 20 most destructive wildfires and four of the 10 deadliest happening since 2000 and you can come to a reasonable conclusion pretty quick: the fires may be getting larger but over time, California’s citizens are at least safer when hit with these disasters.

That wasn’t the opinion of President Trump over the weekend, though, in response to the Camp and Woolsey fires that have been ravaging Northern and Southern California.

There is no reason for these massive, deadly and costly forest fires in California except that forest management is so poor. Billions of dollars are given each year, with so many lives lost, all because of gross mismanagement of the forests. Remedy now, or no more Fed payments!

As you’d expect and probably already know, the tweet didn’t sit well with a lot of Californians. Especially when the President doubled down from Paris on Sunday.

With proper Forest Management, we can stop the devastation constantly going on in California. Get Smart!

This wasn’t the first time the President waved his finger at California for its wildfires and blamed it on forest management, though. Just last month, he said, “It’s a disgraceful thing. Old trees are sitting there, rotting and dry. And instead of cleaning it up, they don’t touch them. I think California ought to get their act together and clean up their forests and manage their forests.”

By Monday, President Trump had softened up and took a minute to thank first responders, tweeting “The California Fire Fighters, FEMA and First Responders are amazing and very brave. Thank you and God Bless you all!” He also approved Governor Jerry Brown’s request for a major disaster declaration, making victims eligible for crisis counseling, housing and unemployment help, and legal aid. But by that point, social media, a handful of California politicians, firefighter groups, scientists, and news sources had jumped all over the claims that poor forest management was to blame for something that’s a very common and often devastating occurrence in California.

So is it really as simple as managing our forests better? According to plenty of experts, no, not even close.

First off, as many people know, the current Camp and Woolsey fires aren’t even forest fires. Both started as what’s known as wildland-urban interface fires; fires that can easily move from forests or grasslands into neighborhoods in communities that are close to undeveloped areas. But even assuming the accusations pointed to a greater problem just taken out of context, as it turns out, only three percent of California’s 33 million acres of forest are owned and managed by state and local agencies anyway. Federal agencies like the Forest Service and the Interior Department own and manage 57 percent and the other 40 percent are split amongst families, Native American tribes, and private companies. And of the “billions of dollars” the President says are given — presumably to the state — each year, California is actually only allocated $256 million toward lowering wildfire risk in 2018. He never specified where the other $744 million+ go or from whom it’d all be withheld in his threat. Unless, of course, he was rounding up and predicting the $720 million Californian politicians will reportedly ask for in relief of the massive fires.

As for the fires themselves the most popular culprit, according to many experts, is just Mother Nature. California’s wind, temperature, and years-long drought have made the perfect recipe for record-breaking fires. Even network meteorologists  — people paid to put fancy weather stuff into laymen’s terms on TV — are giving context to how and why fires are such a common problem in California.

“It’s like taking funds from the National Hurricane Center until you stop all these hurricanes,” CNN’s Tom Sater said in a rant that was broadcast on the network. “It’s the same notion.” Sater then went on to detail a slew of factors that made these particular fires so destructive and tough to control.

“You’ve got temperatures that are about two to three degrees Fahrenheit warmer now than they would’ve been without global warming,” says Park Williams, a bioclimatologist at Columbia University’s Lamont-Doherty Earth Observatory. “In pretty much every single way, a perfect recipe for fire is just kind of written in California. Nature creates the perfect conditions for fire, as long as people are there to start the fires. But then climate change, in a few different ways, seems to also load the dice toward more fire in the future.”

Jonathan Overpeck, dean of the University of Michigan’s environmental school says the fires in California are definitely becoming more severe, a fact that is “much less due to bad management and is instead the result of our baking of our forests, woodlands, and grasslands with ever-worsening climate change,” going on to point out that the average number of U.S. acres burned by wildfires has doubled from 30 years ago.

So as it turns out, there are plenty of factors contributing to California’s persistent wildfire problem. Take, for example, the average snowpack in the Sierra Nevadas, a vital source of water for the state, was around 36 percent of its average between 1981 and 2000. In that same period of time, California’s population grew from 24.2 million to just under 40 million this year, adding more houses in the process. In fact, according to a 2015 report by the United States Department of Agriculture, 44 million houses are now in the wildland-urban interface across the country and California has one of the highest concentrations of them.

So yes, California is quickly becoming a giant powder keg. But we likely can’t blame that on state officials mismanaging our forests.