Editor’s Note: Original Hawaiian is a new series powered by Primo Beer that highlights exceptional individuals who have made outstanding contributions to the rich history of Hawaii’s ocean culture. 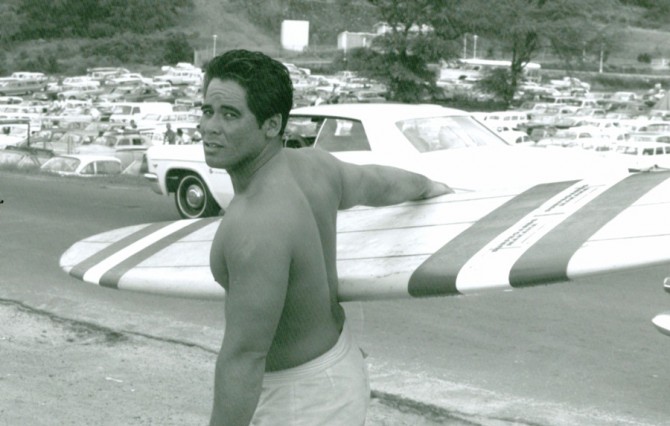 Ben Aipa (24) at Makaha Beach on the westside of Oahu. Photo: Courtesy of Ben Aipa

Ben Aipa stands firmly. Not in any particular place, or at any particular time, but in general. His unwavering presence issues a powerful statement, as powerful as the signature turns he became known for in the late sixties and early seventies. Furthermore, he’s not much for words. Direct and to the point, his physical and verbal demeanor exude the sort of confidence that comes from a person who has worked tirelessly in a singular profession or passion — and for Ben Aipa, surf is both a profession and passion. In many respects, he is the kind of Hawaiian who has come to define the masculine spirit of the islands, spoken in the same breath as Duke Kahanamoku and Eddie Aikau. And it is that spirit that has defined his pursuit of a life in surf.

“Coach” (as he is often referred to as), wasn’t always passionate about wave riding, let alone considering a career in it. In the early sixties, a young twenty-something Aipa didn’t even surf… at all. Instead, the broad-shouldered 250-pound bull of a man was coming off career ending ankle injury as a semipro football player. Raised to embody the grit and determination found then in field workers at a Kauai sugar plantation and blue collar types at the Dole Cannery on Oahu — his parents earned their family’s living on the plantation, and he would later be employed at the cannery — hard work wasn’t taught, it was bred into him at a young age. And that mentality, along with that telltale dominating physical presence, made him a fierce competitor on the field. But it wasn’t meant to be, and his ankles would take him out of the game.

It was then, after being permanently sidelined, that he caught his first wave in the white water at Waikiki. The year was 1964. Aipa was 23, much older than the typical groms, especially in the surf mecca of Hawaii. And in many ways, it was the first day of the rest of his life, a life in surf. “I was with my cousin, and we flipped a coin to see who would try first,” Aipa remembers. “He won. After a couple tries, he gave me the board for my try. I took off on my first wave.”

That competitive edge from a short-lived football career transferred to this pursuit of a life in surf, competing through the early seventies while honing his craft as a shaper. He surfed every single day in 1965.”I ate it a lot,” Aipa says. “But I also made it a lot.”

Like with his football skills, his grit and determination rewarded him with a handful of high profile placements: in 1966, a mere two years after he started paddling out, he was a finalist in the Duke Kahanamoku Classic at Sunset Beach; in 1967 and 1975 he finished fourth at the Makaha International and the Lightning Bolt Pro, respectively; and in 1968 an 1970 he competed in World Championships. 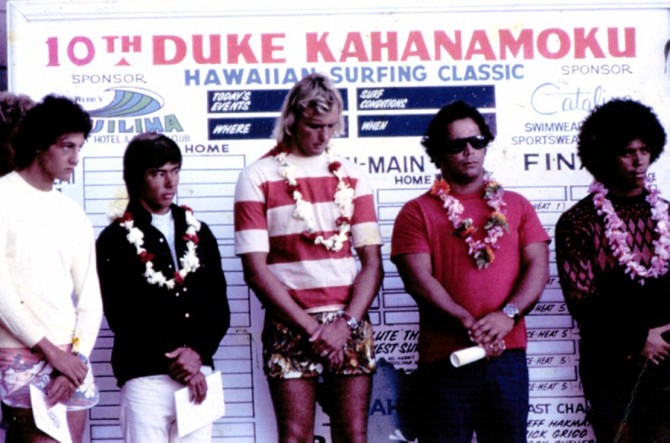 His strong (and surprising given his inexperience) showings were only brief triumphs in what has continued on as an otherwise long and successful career as one of the true innovators in board design. He began shaping at about the same time he began surfing. While it wasn’t as ceremonious as, say, catching your first wave at one of the most famed beaches in the world and riding it all the way in, it was similarly serendipitous and appropriate for the bold beginner: Aipa got into a fist fight with surf shop owner Joe Kuala, and that is why he surfed every day for an entire year in 1965 — he was hell bent on overtaking Joe as a surfer. However, it wasn’t his surfing skills that Joe was inadvertently responsible for. It was his shaping skills.

“He owned Interisland Surf Shop,” Aipa explains, “and that’s where he got me to shape my first board.”

In 1970, he founded eponymous Aipa Surfboards. And it is in that vein that he pumped a newfound energy and with it innovation into the Hawaiian lifeblood of surfing — in 1972 he would go on to invent the swallowtail, while in 1974 he would go on to invent the stinger. Who rode the boards and, in turn, introduced them to the world? None other than the likes of Michael Ho, Buttons Kaluhiokalani, Larry Bertlemann, Eddie Aikau, and Mark Richards. His inspiration for the swallowtail and stinger came from watching those also-legends, seeing how they were charging the waves, and ideating ways to address the shortcomings he identified.

“I did the swallowtail because I watched the boys and saw that they wanted to change directions faster,” Aipa says, speaking to the trend of shorter and faster boards. “The sting was from the hydrofoil of a boat.”

Needless to say, he had a good eye, altering the landscape of surf by discovering new horizons. 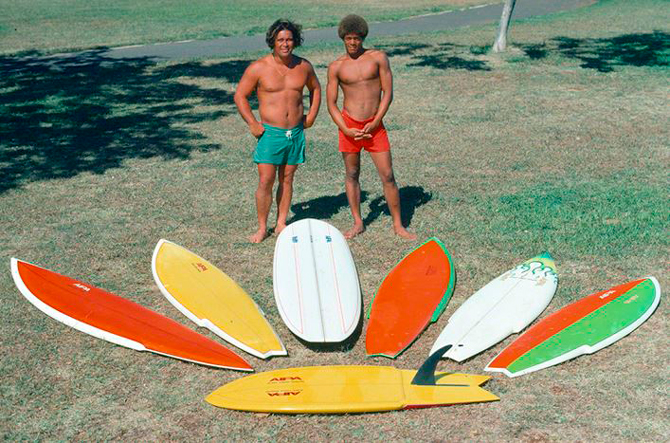 Aipa with Buttons and an Aipa-shaped quiver. Photo: Courtesy of Ben Aipa

It was through those casual relationships with also-legends of the islands’ most definitive time as leaders in the progression of modern surfing that Aipa became “coach,” later being the guiding and influencing force in the success of Sunny Garcia, Brad Gerlach, and both Andy and Bruce Irons, among many others. His power surfing, perfected and furthered by competitors in the eighties and nineties, still has a very prominent space in competitive surfing and free surfing alike.

Then there are the strict numbers: in his hallowed career, it is estimated that Aipa has shaped upwards of 40,000 boards.

“Surfing has been very good to me,” says Aipa, looking back on his long and successful career.

That may be the case, but the feeling is mutual — Aipa has been very good to surfing.