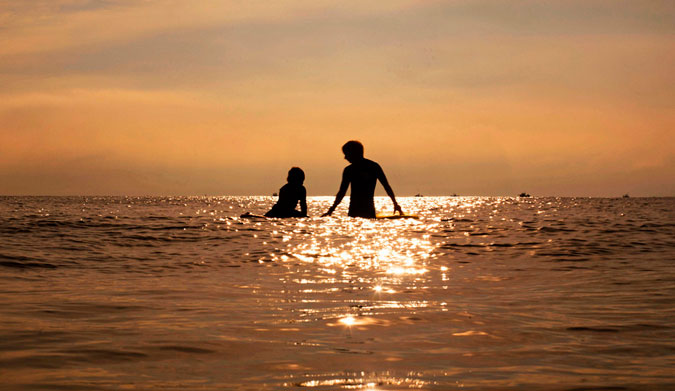 Make sure this kid is not having fun. Image: Incitti

Whether you’re looking for some extra under-the-table income, an activity to do with your niece, or just need a nice little ego boost, teaching kids to surf is an immensely challenging and rewarding activity. Helping them overcome fear and catch their first stoke feels almost as good as demonstrating how much better at surfing you are than them. Without further ado, here is a comprehensive and serious how-to teach kids to surf.

1. Pick the right equipment. A lot of people recommend starting kids on foam boards. The argument here is that it’s safe and catches waves easily… this is a big NO. Safe and easy now leads them to unemployed and single later on. I like to put kids on a greased up Alaia board right off the bat. Demand every bit of whatever meager athletic prowess they may have from the get go. And if they make a mistake, as in life, it could cost them dearly.

2. Watch your mouth. Kids soak up everything you say. If you are constantly censoring yourself around them, they are going to be unaccustomed to cursing later in life, and this is just doing them a huge disservice. You know who curses? Cool kids. How can you expect a kid to become a part of the cool kids table if they squirm around dirty language? Drop a variety of both casual and aggressive F-bombs from the get go. The parents won’t like it, but this lesson isn’t for them, is it? It’s for the children.

3. Mind the conditions. Know where the rip currents are.  And plop that kid right in one. Send ‘em out to sea and see how they fare. Once they ditch their greasy Alaia and start climbing the ladder, their true character will be revealed. Who knows, maybe they’ll make it in without a lifeguard. Either way, once they’re safe, send ’em paddling right back out directly into the largest set of the day, preferably through some heaving shore break.  The foundation for any future waterman is respect for the ocean, and respect born from fear is the most potent form. Get ‘em in the shit early, and see if surfing is something they really want to do after all.

4. Choose waves carefully. Sure, anyone can trim down the line on a perfect peeling shoulder, but sneaking into a freight train close out for a half second tube ride followed by utter annihilation takes balls. If you pamper and coddle, they’ll never get off the teat. Push them into the largest closeout of the day and demand courage.

5. Be patient. The longer it takes for them to get comfortable and proficient on a wave, the more lessons they’ll need, and the more money you’ll make!

6. Know when to shut up. There are times when you should compliment and encourage, but bite your tongue and keep it in. If you start throwing out “great jobs!” after every pathetic white wash stand up, they’ll embrace mediocrity and this will retard their progress. Only after they’ve surpassed your skill level should you laud their efforts. And then do so with spite.

7. Let them make mistakes. Sometimes it’s better to completely ignore the kid during the lesson and just catch a ton of waves yourself. This way you are actually being paid to surf, which is awesome. And for the kid, learning humility is essential. Whenever they ask you a question, vibe them, make them feel stupid for talking in the line up, then paddle around them and take their wave. This will force them to look within for answers, which we should all do. The divine teacher is in all of us.

8. Know when to give them the push, and when to back off. If they have been improving steadily and are getting a big head, this one becomes very important. Say they somehow get themselves in the right position for a nice big wave. I like to give them a vigorous push so they are no longer in position. This way the wave breaks right on top of them and they must accept their kook status as they go over the falls. If they’re too far outside, I’ll just let them spin their wheels, and tug on their leash a little so the wave passes right under them. They’ll learn that surfing is a sport of inches, and that they still suck. Remind them they have lots of room for improvement.

9. Know when to end the lesson. Then push on for another couple hours. Kids have a lot of stamina. Make them use all of it, both emotional and physical.

10. Always end on a good wave. Get them on something that will take them all the way to shore so their parents can get a picture. Then let them know that it wasn’t a very good wave really, and tell them about some of the better waves you’ve had for contrast. Maybe you have some pictures of yourself in a Nicaraguan barrel on your iphone. Show them once more how much better you are than them. Surfing is a humbling sport. Remind them this constantly. Nip their enthusiasm in the bud.