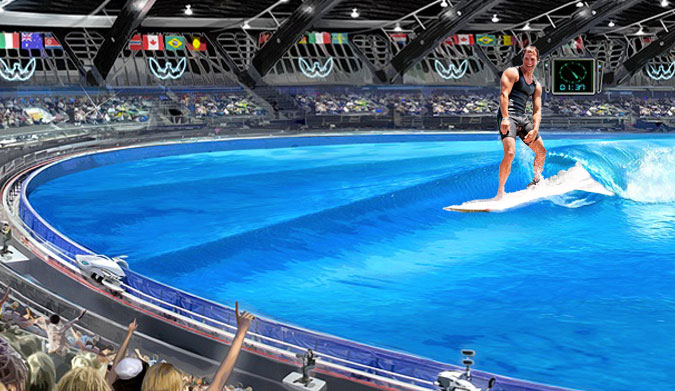 So wave pools are a thing. Whether or not riding boards in them on top of their synthetic water hills can really be considered surfing still remains to be seen. Whatever they’re going to call the water sports activity, it’ll be in the Olympics soon, and now that Austin has one of its own, I’ll get to slide on some Mcwaves with McConaughey when I go visit my family. So that’s something.

And I’m not worried about inland wave pools leading to overcrowding at real surf breaks around the world because they can’t get any more crowded. They just can’t. It will also be simply delightful to see people progressing fancy-schmancy surfing maneuvers to insane new heights. That all being said, splashing around in wave pools is just not going to be cool, and anyone who does it is going to be a big Jabroni. Which there’s nothing inherently wrong with. The world needs Jabronis.

Wave pools are to surfers what stocked ponds are to fishermen. It’s canned hunting. Wave pools are a big ol’ fake set of titties… well, I guess those are cool. But what I’m saying is fake waves–like fake hooters–just aren’t ever going to be as good as the real thing, no matter how perfect, round, and frothy they may get. It’s too much of a good thing without the necessary balance of effort, sacrifice, risk, timing, knowledge, experience, patience and imperfections that make it so much more rewarding. Just like access to a cool big ol’ natural set of jugs.

Fun bags aside, if wave pool play time ever wants the respect of the surfing community, or anyone anywhere ever, it needs to heed my advice below. I’ve compiled a completely serious list of eleven things that will make wave pools cool, and the activity within worthy of being in the Olympics and what not.

1. Patience is cool
After the water park customers have already paid for their hour, signed their releases, chosen their shred sleds, suited up, donned their aqua socks and paddled out, the wave pool tech just shouldn’t turn the waves on at all. More often than not, he ought to just leave it flat, sitting there with his arms crossed. Then right as they’re doing the paddle of shame back to fake-shore, send the wave of the day, annihilating them on the inside. Teaching patience is cool.

2. Good business foresight is cool
Similar to the first point, there has to be a “shit waves” mode where the waves have no push or shape. They’re just crumbly, swampy turds, and high powered fans completely blow out any of the occasionally good ones the grumpy wave tech does let sneak through. If the waves come in perfect, glassy and firing time and time again, it’ll create a generation of entitled shit bags with no constitution or respect. That’s not cool. Humility and gratitude are cool. The wave pools can even monetize this inconsistency further by having a surf report, cam and forecast available up to seventeen days if you pay for a premium membership. It’s important that the surf report often over-hypes mediocre days, as well. Also the camera should be super far away so as to be completely useless. I think, though, that there should be a limit for how many different computers one premium log in can be used on so that one surfer doesn’t share his account with a dozen friends, who share it with a dozen of their friends and so forth. Good business foresight is cool.

3. Primal fear is cool
Put at least one shark in there. Just to keep it interesting. A dose of primal fear is cool. So is not living your life in fear. Pending a generally successful outcome of this one, the same could also later be applied to maybe adding grizzly bears to skate parks to straighten those punks out.

4. Healthy immunity is cool
Pollute the wave pool with a proprietary blend of bacteria, Fukushima radiation, condoms, syringes, sewage, plastics, antifreeze, chip bags and lots of tar balls/oil. This will undoubtedly give the ride a more authentic feel, while keeping the risk factor high. It has the added benefit of strengthening the wave pool riders’ immune systems. Healthy immunity is cool. So are activities that come with a moderate to high risk of contracting one or several forms of Hepatitis.

5. Employment is cool
Have no limit for how many people can be in the wave pool at a time. In fact, before the session can begin, there should be a minimum of forty six people required, stationed all over the pool, in the way, taking up space, paddling for the shoulder and bailing boards everywhere. Especially on the really fun sections of the wave. These can all be employees if you’ve rented the pool for a private session, which creates lots of employment opportunities for lifeguard/actors like me. And that’s cool.

6. Spoiled kids are NOT cool
Do NOT let children play in these pools. It will blow surfing for them completely. Starting them on flawless waves is like giving a kid a bunch of pure, uncut black tar heroin on their ninth birthday. Uncool. You’re blowing drugs for them when they grow up.

7. Envy, spite and resentment can be cool
Have the lifeguards blackball the peak for hours at a time so you have to surf the shoulder and close out section while watching perfect bombs go unridden all day. Also encourage the lifeguards to surf the peak alone in front of everyone else during ‘adult swim’ until their legs have so much lactic acid in them they couldn’t save you if they wanted to. Then open the peak up for like half an hour before turning on the powerful fans to blow it out. Envy, spite and resentment can be cool motivators for life success.

8. Narcissism is cool
Required GoPros. Everywhere. Even when you go to the bathroom. One on the nose of your board facing out, one on the nose facing in, one on your tail, one on each rail, one in your mouth, two on selfie sticks, one on a drone flying overhead and another on a different drone filming that drone filming you. Every possible angle must be covered so that you can post about how you’re a surfer and prove it to all your poor friends who can’t afford the cost of not only time in the wave pool, but the exorbitant price of renting all those GoPros and drones. Narcissism and the feeling of financial superiority are cool. The wave pools can also partner up with GoPro for this. And smart, savvy business partnerships are cool. Maybe even launch a whole new line of GoPros called GoBros, for the less discerning, more down to party wave kind of surfer.