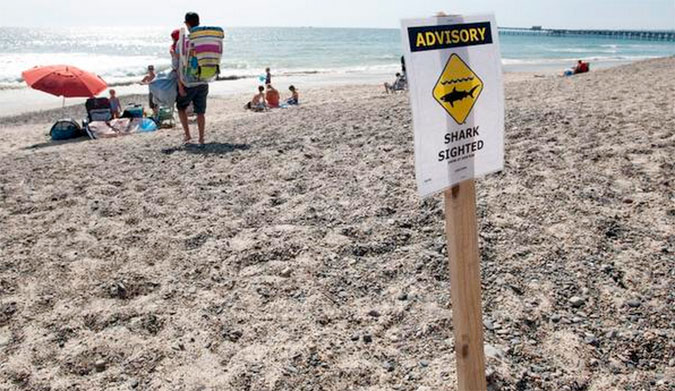 Lifeguards pulled surfers and swimmers from the water, and closed the beach until Saturday around noon. Photo: David Bro

Signs prohibiting people from entering the water have been posted at T-Street beach in San Clemente, as lifeguards are advising beachgoers of the sharks that had been recently spotted in the area.

According to marine safety officer Ian Burton, a fisherman spotted a shark near the city’s municipal pier around 7 p.m Thursday night. Around 11:30 on Friday morning, a second shark was spotted by a lifeguard on a jet ski and followed it for nearly an hour and a half. 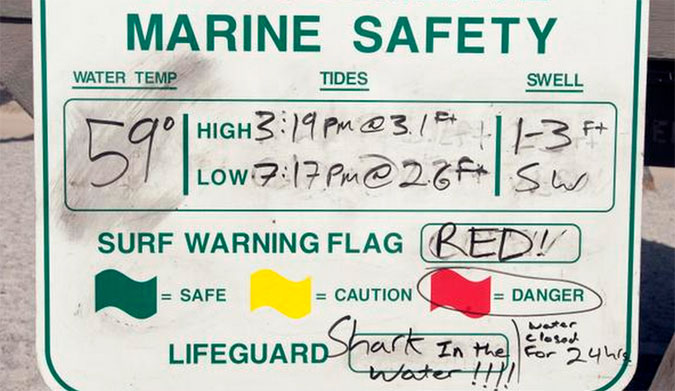 Not something you want to see while on spring break vacation. Photo: David Bro

Lifeguards cleared swimmers from the ocean and closed the beach one mile north and south of the lifeguard tower at T Street. Officials did not pinpoint the species of the shark, but estimate it to be around 6-7 feet long. The beach will remain closed until noon Saturday.

While this incident may be alarming to many swimmers and surfers, seeing sharks in South Orange County and San Diego is not entirely uncommon. Ralph Collier, President of the Shark Research Committee, suggests San Clemente is a hotspot for sharks – primarily great whites.

“We know for a fact that San Onofre is an area populated with sharks. We’ve had a couple of incidents down at San Onofre State Beach in San Clemente. I’ve stood on the cliffs down there at the trail and watched guys in the water surfing, while watching 9, 10, 12-foot white sharks swim right underneath four guys that never even knew they were there. San Clemente is a popular area, especially during the pupping season, which is March and April. Surfers might start seeing these 3-3.5-foot long, grey torpedo animals swimming around. Those are baby white sharks.”