Observations from a Visitor: A Surf Trip to the U.S. During an Election Year 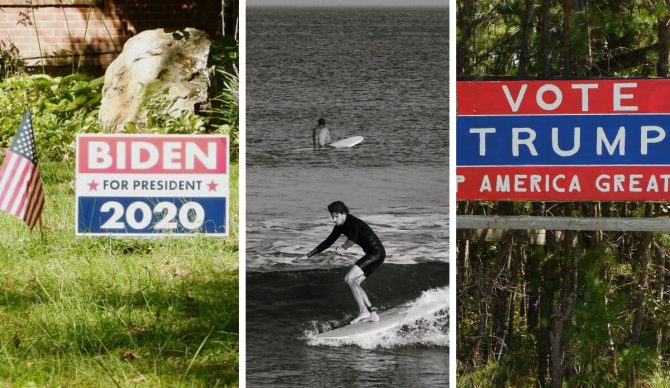 The United States in an election year is like nowhere else on the planet. Photo: Ray Kazir

Election years in the United States are always interesting, and with Donald Trump running for his second term, 2020 was expected to be a unique one. But as we all know, 2020 took us on its own ride. When most of the world shut down at the end of March, many of us believed this would all be in the rearview mirror in just a few short months and life could move back to what it used to be.

For me, it was another great summer in the Southern Hemisphere. A month-long COVID-19 lockdown seemed like a bump in the road before summer sun, surf, and road-tripping — more or less business as usual. But you couldn’t escape the news coverage of the upcoming Presidential election and a global reaction to police brutality against African Americans back in the States. But with summer coming to an end and the world showing signs it would “open up” a bit, I jumped on an invitation from a friend living along the U.S. East Coast to visit. Many people around me couldn’t understand why I’d want to leave a location in the world that seemed safest from the spread of COVID for a visit to one that appeared to be the worst. The answer was clear to me: as a world-traveling photojournalist, I was going to witness firsthand the social-political climate facing Americans in a build-up to their election, all while their federal government had no clear or obvious approach to fighting the virus and BLM protestors still marched in the streets. All this in a place I’ve never been to during the summer months, nor had I surfed its famous hurricane season.

So, with my approval from the U.S. embassy, I landed in New York soon after and made my way down to the Jersey Shore. It was strange and overwhelming to see empty streets in New York City and I had to get used to wearing a face mask everywhere I went, but the air was warm and the ocean wasn’t too cold. I spent the early part of my trip waiting for the first legitimate swell to come, surfing whatever the Atlantic threw my way in the meantime. Some days were flat, some were clean and offshore with overhead barrels, and in our non-surfing ventures inland I got to see different Americas. 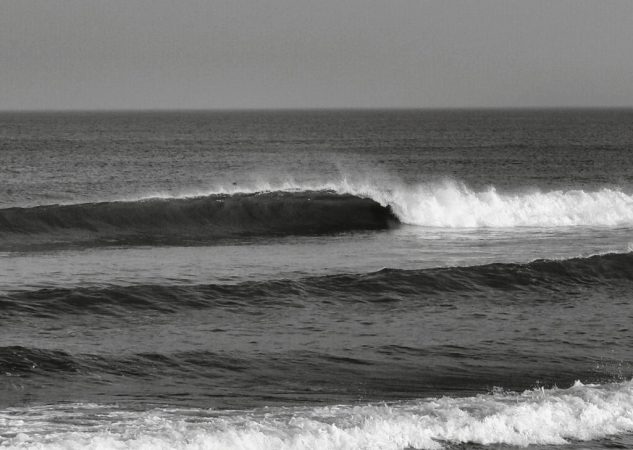 “In the surf, none of this existed. And by that I mean the only discussions were about future and past swells, no politics allowed. For that, it was a great summer.” Photo: Ray Kazir

Americans were obviously split over everything: from COVID to police brutality and protests calling for justice and equality, to an impending election, and even historic wildfires on the West Coast sending smoke into the air that covered the skies on the other side of the country.

But what shook me the most was learning and seeing how America actually votes. My impression from driving around New Jersey was that it was a red state, but a quick search on its voting history showed me the Garden State has leaned Democrat for nearly three decades. When I dug deeper I learned that the specific counties I’d been driving through were actually predominantly Republican, but it’s the American electoral college that makes the state blue. It’s as if many of the front yard signs and banners I’d driven past and the votes they represented were lost. In the electoral system, it seems they don’t count; they don’t make a difference. I may not be an expert on American politics but searching voter data and seeing the numbers, I noticed that it’s not infrequent for the majority of Americans to vote for one person and then watch another candidate actually take office. My search for more information brought me to a Netflix series called Whose Vote Counts, Explained, which helped me to better understand the system.

I also saw that campaigning in the United States works like nothing I’ve seen in other parts of the world: planes flying campaign ads, massive flags (mostly in support of President Trump) flown from cars nearly every time I was on the road, and front lawns used to show support for one candidate and his agenda. From those signs, I could infer the differences that existed between parties, or at least between what matters to its supporters. Donald Trump’s supporters are very much present and visible in the public sphere, which felt different from my past visits to the U.S. To put it bluntly, it felt more loud and violent, like a loud minority trying to overtake a silent majority.

But in the surf, none of this existed. And by that I mean the only discussions were about future and past swells, no politics allowed. For that, it was a great summer. I was in the water every day. I surfed, traveled, and learned a lot following my own American campaign trail.

If I can pass on a message to Americans from what I’ve seen, it’s to be grateful for the home you have. Your country’s diversity, its natural beauty, its coastlines, and its many freedoms are unparalleled.

Editor’s Note: Ray Kazir was born and raised in Israel, served in the Israeli army, and is now a photographer living in New South Wales, Australia.