5′ 9″ Is the Optimal Height for a (Male) Surfer; (Aka: Short People Rule Surfing) 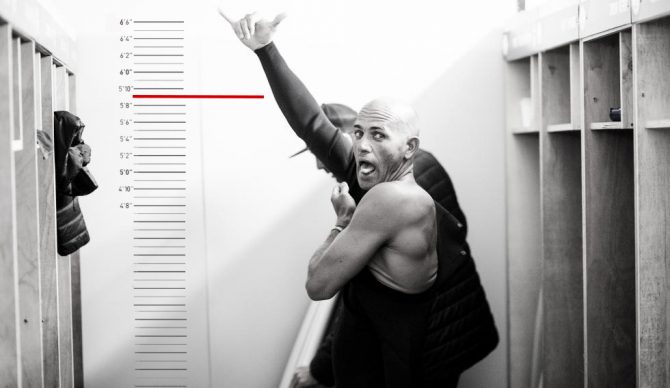 Dream no longer, my stunted friends, because I am here to offer you hope! I can show you a world where you are no longer left upwardly wanting, a world where all the shelves are accessible, and all the rollercoasters rideable without adult supervision! It’s a magical world where the little man is king! It is the world of surfing! Yes, I swear it’s true. Short people, though diminutive in stature and sometimes big on chipped shoulders, are often particularly good at surfing!

And this is great news, because let’s face it, we do exist in a society where “heightism” is a thing. It’s not a thing like war, or poverty, or racism; but it is a thing like photobombing, deep fried Mars Bars, and #swag. Height prejudice exists in everything from business, to politics, to dating.

It’s a well-documented fact that most women prefer taller men. You’re probably guilty of squinting curiously at couples where the woman is significantly taller than the man. We are conditioned to see it as an oddity. (As an unrelated sidenote: it does strike me as a screaming hypocrisy that many women baulk at notions of sexism whilst simultaneously dismissing any male specimen who doesn’t meet their specified height requirement, even to the point of unabashedly mocking them).

These lonely, tiny people also have less money than others of greater genetic fortune. According to research by the British Medical Journal: “Shorter height leads to lower levels of education, lower job status, and less income.” This has been the finding of several studies. So theoretically, over the course of a 30 year career, someone who is 6 feet tall might expect to earn $19,200 more than someone who is 5’ 4”! Crazy talk.

But fear not, little guy! Surfing is your salvation! Get yourself a board with your meager pennies and get thee to the beach, because you’re almost guaranteed to smoke Mr. 6-foot Big Time Charlie! You see, people over 6 feet tall just don’t make good surfers.

Of the current top 34 male surfers in the world only six men measure over 6 feet: Joel Parkinson, John Florence, Jordy Smith, Julian Wilson, Sebastian Zietz and Adam Melling. In previous incarnations of the Tour, this number has been far less. All of these surfers are between 6’ 0″ and 6’ 1″ with the exception of our very own Gulliver: Jordy Smith, who, in the context of surfing’s race of Lilliputians, stands at a gigantic 6′ 3″!

The best competitive surfer in the world (Italo Ferreira) is a mere 5′ 6″ – the size of a large child. I’m not sure how tall Mason Ho is, but he is certainly one of the best freesurfers in the world and has a big head like Tyrion Lannister.

The fact that twelve of the world’s top 34 surfers are precisely 5’ 9″ is probably just coincidence (or is it?!), but in many ways being short is advantageous to surfing. Less height allows for a low center of gravity, leading to good balance and a strong power base. If you’re short you’re probably quite light as well, which lends nicely to small wave performance. It stands to reason that you can probably make it in and out of more barrels than a tall person. And guess what? The smaller you are, the more days of decent, overhead surf you’ll get!

Yes, in the surfing world the little guy truly is king. If you don’t quite make it as a pro there will be other jobs for you (see: Glenn “Micro” Hall and Travis “Chimney Sweep” Logie). Surfing may be one of the few walks of life where above average height seems to be a distinct disadvantage. And if you’re 6-foot+ you can pretty much forget it! At any rate, this has been part of my armoury of excuses for many a year, and I’m sticking to it.