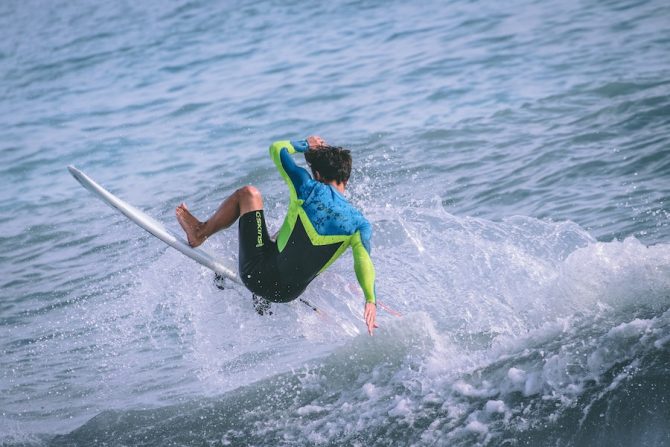 You can fix this.

Editor’s Note: This guide was created in collaboration with The Art of Surfing Academy, an online surf coaching program designed to help people break through performance plateaus and improve faster, including new content that is added monthly. Access TAOS here.

Most surfers have a number of bad habits that hold them back for years. These mistakes are often fundamental errors and although they may not seem like a big deal, if you don’t fix them, then it’s going to be tough to improve – which plays a big role in us getting stuck.

I’ve spent the last 10 years coaching thousands of people, from Olympic athletes to young kids, so I have seen a lot of common mistakes. These are the five big ones I see all the time and how you can fix them.

The placement of your feet can be the difference between surfing that flows or continually falling, and this isn’t just a mistake that beginners make.

A lot of people have what I call a locked stance. They can’t compress and extend in a flowing motion. Their hips are locked up, making it harder to twist their torso, which then limits their mobility and eventually makes it difficult to flow from rail to rail, staying balanced and centered throughout.

Now, there are a number of reasons why someone’s stance might be locked up. A common one is the “haka stance.” Watch a traditional haka and notice how their feet and knees oppose each other. The trouble with this stance is your back knee is facing the wrong direction and can’t drop in toward your front leg. This prevents rotating your upper body or generating speed. It locks your hips and changes weight distribution as well.

I also see people with their feet in the wrong places on their board. Whether both feet are too far forward, too far back, or too close together, misplacing your feet can lead to instability and a lack of mobility and speed. Don’t get sloppy or lazy with your stance because you want to focus on more exciting things. When you get your stance right, you’ll do everything on a surfboard better.

The pop-up is one of the most critical moments of surfing a wave. Getting it right makes it easier to remain in control and generate speed off the mark. As a beginning surfer, you can typically get away with this because you are riding softer waves on bigger boards. But that’s a habit you must break as your surfing progresses.

A proper pop-up should be smooth and quick. It’s one fluid motion to get you from paddling in a prone position to standing on your feet. If you stand too far back on the board when you pop-up, you’ll slow yourself down by weighting up the back of the board. In that case, you are effectively slamming on the brakes. If you are too far forward, you’re more likely to nosedive and you will struggle to turn your board once you’re up and riding down the face.

We mostly think of surfing as the actual time spent on a wave, but I also like to focus on something called the “in-between moment.” This is the time between first seeing the wave you plan to catch and actually getting to your feet. This critical time, if used correctly, can be used to get you into the ideal peak position for each wave.

A lot of people don’t take full advantage of this time, which impacts their ability to catch quality waves. They just don’t have a flexible plan. When they see a wave, they turn and paddle. They only have a couple of approaches. They don’t adjust depending on what sort of wave it is or where they are in relation to it. The problem with rushing the in-between moment is it makes you less likely to be in the best peak position, often ending up in less desirable spots on those waves or missing them entirely.

You need to stay focused on the wave during your entire approach, continually surveying it as you move into position.

Mistake #4: Incorrect Use of the Upper Body

When you fall, what do you do?

If you let your instincts take over, you’ll put your hands out to prevent yourself from getting hurt. This isn’t usually a problem but it becomes one when you’re surfing. See, when you’re on a board, your body can switch into that same falling mode when you miss-time a turn or catch a rail. You enter a reactive state, flailing your arms to counterbalance any sudden movement. The problem is this creates two opposing forces because there’s no synergy or flow to these movements.

When your arms and upper torso aren’t properly involved in surfing maneuvers, you slow yourself down and balance is lost, causing a lot of ugly turns and awkward movements on waves. If you watch any pro surfer you’ll see that every movement looks deliberate, easy, and graceful. That’s because they’ve not only grasped how to pop-up, how to read a wave, and how to position their feet on the board, they’re also using their upper body in coordination with everything else they are doing. It’s not random.

What I tell my clients to do is to “surf proactively by using handlebars.” This is because on a bike, we turn handlebars in the direction we want to go. The same concept applies to surfing, making our movement deliberate and controlled by pointing where we want to go with our hands first and letting the rest of our body and board follow.

Why is it that some surfers don’t seem to improve? They may have been surfing for years but aren’t getting much better, making the same mistakes and complaining about the same problems.

Most surfers just make learning new things way harder than it needs to be.

They might have gotten a bit of coaching or had a friend record them. Then maybe they figure out a bunch of things they are doing wrong, but instead of trying to fix one thing, they try to fix it all. The problem here is they end up spreading their focus too thin. But to improve their surfing, what they really need to do is slow down. Or as I tell my clients all the time, “You have to slow down to speed up.”

What I mean by that is when you focus on one thing at a time, you get measurable results. Then, when you move back to your normal routine or focus on something else, it sticks. With surfing in particular, you want to build up muscle memory. The more you isolate your movements, the more reps you do correctly, the more muscle memory you build.

Surfing isn’t a sport that you master, even as a pro. You are always learning and progressing as a surfer, no matter how skilled you are. And to do that you need consistency and focus, both things that many people talk about but don’t apply. So ask for advice, get somebody to film you, and watch yourself surf over and over again. Be honest with your mistakes and work to figure out where your weak points are. Now go after one weakness at a time. Sometimes I break this down by session, where the focus for an hour is simply on doing a smooth and quick pop-up with correct foot placement — no worrying about maneuvers or speed or catching the biggest waves. After that hour is done, it’s time to just have fun the rest of the session. I find this more effective than trying to improve everything at once for hours and hours. And ultimately, this cuts down the sharp learning curve.

If you’re interested in making a commitment to improve your surfing with, access The Art of Surfing here.