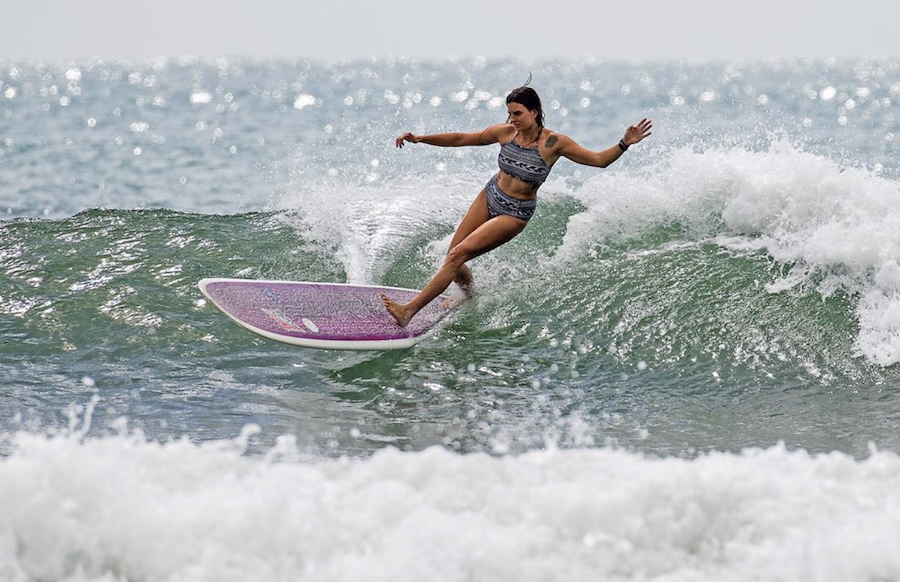 Kathryn Hughes is definitely a threat to take out any contest. Photo: Fenna de King

In the longboarding world, everyone knows the names Honolua Blomfield, Chloe Calmon, Rachael Tilly, Alice Lemoigne and deservedly so. But I want to focus on a different group of women, shifting the attention to young talent and other vets on the WSL’s newly-revamped World Longboard tour. At events in Europe and New York, I saw many new faces and different styles. I was in awe of the degree of talent at both contests. Style and difficulty of maneuvers was on full display.

I wasn’t familiar with some of these surfers and it was impressive to see how much work these competitors had put in. Since sponsorship is limited in the longboarding arena, many of them spend thousands of dollars out of pocket to participate and do what they love. And they do it well. With that said, here are five underrated surfers you should keep an eye on in the seasons to come.

An artist in the water and on land, Kat Hughes (pictured above) can ride in a number of styles form high performance to log and basically ride anything. This lovely lady from “down under ”  has been on the tour for quite some time and her talent and ability is unparalleled. I also met Kat in Spain and introduced myself to her and her friend Kirra Molnar. The conversation moved quickly to the types of boards they brought to the contest and the forecast: The swell had started to build through the day and the change in size was dramatic.

With 12-foot tide changes and gaining at least three feet of swell in an hour, I witnessed Kathryn take off on a bomb set wave. Without hesitation, on the most critical section of the wave, Kat perfectly timed an insanely steep nose ride. She was planted on the nose of the board hovering for a solid ten seconds and landed with precision. I automatically thought to myself, “ well then, If I draw her in my next heat this is going to be rough…” Thankfully I didn’t have to endure the critical noseriding maneuvers of Kathryn Hughes but I witnessed it when I watched her heat. Kathryn has a great track record  from previous years, and finished as high as second in 2015 so she knows what it’s like to win contests – in short she’s the perfect competitor for the WSL’s new World Longboard Tour. 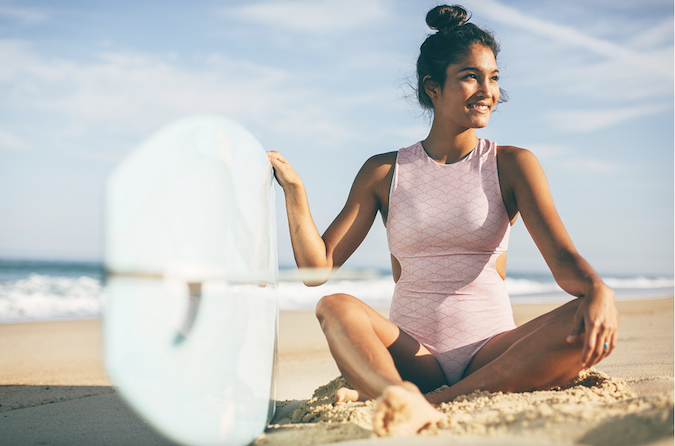 The 25-year-old from Reunion Island is a beauty in the ocean and on land. She has it all: style, grace, and crazy maneuvers while sporting a shining smile from ear to ear. Her positive energy exudes in and out of the ocean. We met up with her and Alice Lemoigne in Spain. They were traveling together for the WSL Galicia Event. Waking up early to a cold  Spanish ocean, with waves hovering around two-three feet, we went out to greet the day. The water was freezing and I was shivering in my three millimeter.

Waiting for the sets to materialize, I glance over and out of the corner of my eye, I saw Ophelie displaying the most beautiful noseride perched for what seemed like ages going left.  Not only is this girl graceful in the water but one of the most gracious people I’ve met. I knew that she was a formidable opponent in competition, as she was extremely focused during her heats and placed ninth overall in Spain for her first longboard tour event . Fun fact about Ophelie: she started the longboard tour after four years in college and speaks at least three languages including French, English, and Spanish . Her abilities are not limited to surfing. Ophelie Ah-Kouen will surely be a force in the upcoming seasons. 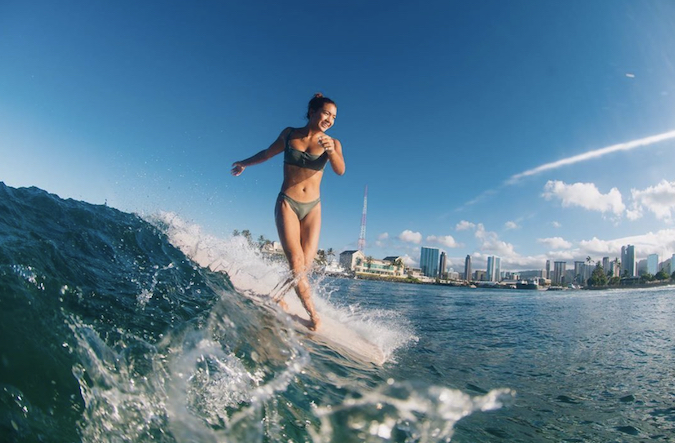 The young Hawaiian has it together upstairs. Photo: Cait Miers

This impressive young lady (only 17)  is a newcomer to the WSL longboard tour. Mahina has a tongue-in-cheek attitude and the confidence of Muhammad Ali.  We first did battle against Norwegian Airlines together, forcing them to allow us to ship our (way-too-long) longboards.  After three hours of unrelenting stares they succumbed and we became fast friends. When we landed in New York, we headed straight to the ocean.

This is her first year competing internationally with a new set of competitors.  After watching Mahina surf, I noticed that she has one of  the most graceful drop-knee bottom turns I’ve seen from someone her age. Her top-to-bottom surfing had a lot of flow and she kicked it off with a planted hang ten. Her playful, yet poised maneuvers are a dangerous combination. She dominated many of her heats in WSL New York making it all the way to the quarter finals, unfortunately falling just short of the semis. She is currently sitting eighth on the World Longboard tour with her best result a fifth place in New York. This young Hawaiian has a fierce mental game which should carry her far in the coming years. 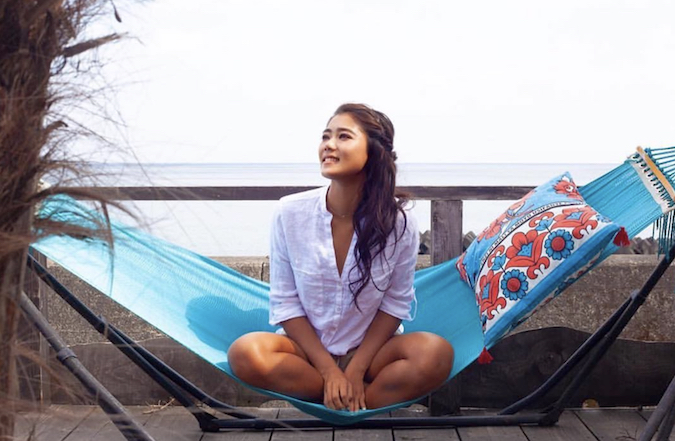 Minami  is one of Japan’s best hopes oh the world tour.

I watched this 19-year-old university student surf in New York and felt I had to include her in this piece . The Japanese phenom finished her season in a tie with Mahina Akaka for eighth on the Longboard Championship Tour. Her style differs from the first two loggers as her technique is more high performance. Her radical turns complimented by her smoothly-executed nose rides would make anyone’s head turn.

I met her only once at the New York event. However, I had the privilege to watch her surf in her heats all the way to the fourth round. She is still holding onto an eighth place for her efforts in Noosa, Australia where she finished in the quarter finals. Being one of the only women competitors from Japan and competing during her school year is extremely difficult and comes with a lot of pressure but that challenge might make her even more disciplined and determined. Minami seems just as beautiful as her surfing and her self discipline and mental toughness in heats is lethal. She’s an impressive competitor. 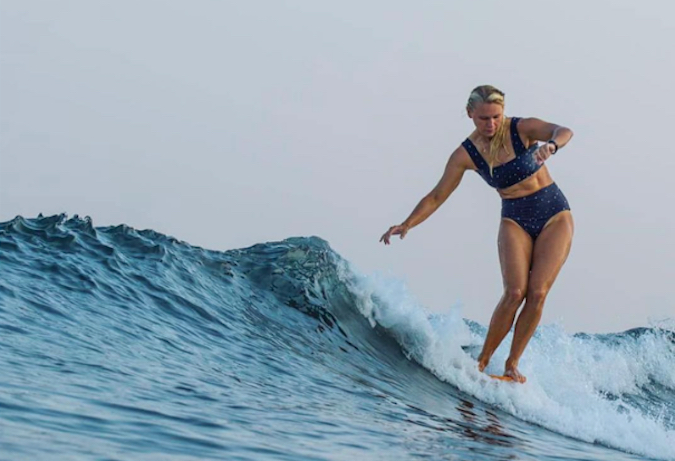 This Australian longboarder is impressive in the water while also navigating the highly competitive world of academics. Kirra Molnar just finished her double degree in Business and Sports Exercise Science at not only one but two colleges – one in Australia (the University of the Sunshine Coast) and the other at Elon University in North Carolina.

After four years of college , she decided to dedicate a season to the World Longboard Tour. Kirra is a rookie hailing from Noosa Heads, Australia. She worked on gathering up points in the Australian contests last year, finishing third, fifth, and ninth which placed her in a good spot for the international events. Her first international WSL competition was at the Galicia event where I met her with Kathryn Hughes. I watched Kirra finish off an aggressive rail turn by launching into a hang five for some extra pizzazz at the end of the wave. Her flashy style combined with balletic nose rides make her a threat in any competition. She’s very composed and confident which makes her even more dangerous. Kirra is working on being more consistent in her heats by polishing her maneuvers in free surfs.  Her mental game is exceptional as she focuses that in heat strategy and variety (in maneuvers). Kirra is coming up the ranks and biting at the heels of the other, more seasoned competitors. As with all these women, she’s one to watch in the coming years.

Editor’s Note: Francesca, or Frankie as we like to call her, is a talented competitor herself. She’s from Southern California.