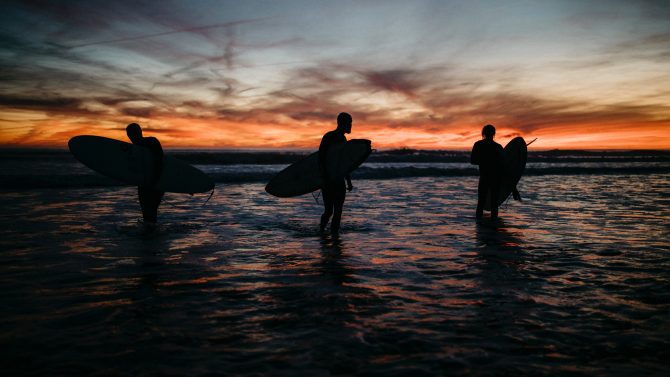 I just got back from a short trip to Pavones as a guest at Surf Expedition, a surf coaching retreat located just a few kilometers from the famous long breaking left. I went with the objective of learning what makes a good surf camp, researching where my travel clients should stay when they want to learn to surf while on holiday.

Surf retreats are popular around the world, costing from less than $1,000 to several thousand dollars. The rule “you get what you pay for” often applies, but occasionally you find a hidden gem that has qualities well beyond a well-curated Instagram feed, a slick website, and a smiling, well-tanned instructor. Here’s what I learned a quality surf camp should have and therefore, what a beginner surfer should be on the lookout for:

This is simple and straightforward. When I go to a surf retreat, I want to be close to the waves. I like checking the surf at low tide, high tide, even mid-tide, and learning what the winds are doing all day throughout my visit. In tropical climates during the rainy season, the pattern is typically offshore in the morning, onshore by 9 or 10 a.m., and then possibly a glass off in the afternoon right before dark. At Surf Expedition I could sit up from my bed and see what the waves were doing. The main break is a 10-minute walk to the peak on a beautiful empty stretch of beach, with palm trees and jungle providing some morning shade. There are a few other less crowded waves close to the camp for beginner and intermediate surfers, and at times it is empty.

I also like it quiet, at least without the sounds of civilization. Where I stayed, the loudest noises were the scarlet macaws screeching as they flew by and the howler monkeys early in the morning.  No planes, tractor-trailers, or sirens to be heard, but instead the soothing rhythm of breaking waves on the shoreline. I also had the option of exploring more of the jungle on horseback or hiking to a nearby waterfall.

There was one man-made sound I enjoyed hearing on my trip: the dinner bell. What a surprise! A former professional chef is also the co-founder of the camp I visited and prepared all the meals for the guests. She created mouth-watering meals with oven-baked bread and pastries, curries and soups, pastas and salads, and there were always fresh fruits with breakfast and hot coffee and tea first thing in the morning. The vegan options were just as tasty and it was difficult not to go back for seconds. As every surf retreat should, they had clean filtered water on hand that guests could refill their bottles, plus it was easy to grab a coconut and cut it open for some refueling electrolytes.

A surf camp should have quality food if they are going to offer meals. Surfing burns a lot of calories and it’s important to stay satiated and hydrated. Some partner with local restaurants and then bring their guests there, which works well if they have a diverse menu and have vegetarian options for surfers.

Joining a group of strangers to learn to surf can be a bit overwhelming. Some guests may not even speak the same language as you, which can certainly make it tough to feel comfortable within the group. An easy-to-overlook-factor in a quality stay at a surf camp is the camaraderie — a crucial part of the experience.

The host needs to be friendly and make guests feel welcome. They have to be helpful in answering even the silliest questions because some travelers have never left their home country before and the culture shock can be intense. And they have to be encouraging, since surfing is not the easiest sport to learn, handing out sunburns, bumps, and bruises along the way.

Sebastien was that guy during my time at Surf Expedition. He was always smiling and conversing with his guests about the waves they caught that day, whether it was in English, Spanish, or French. He prepared a daily schedule so everyone could have a planned time to surf, eat, do yoga, and siesta. Before meals, everyone held hands and one person gave thanks, which sounds a little cheesy, but it really made the group feel more like a family (I appreciated that, living so far away from my own). The yoga instructor came out to surf with us and take photos. And the instructors sat with the guests in the evening to share a beer and some surf stories.

Again, this sounds obvious but it’s an easy detail to overlook that could make or break your experience. Surf Instructors are the most important part of any surf retreat and should be certified by an international organization like the ISA as well as having first aid and CPR training. But beyond the technical training, they also should have patience with their students and make them feel safe in the water. Many surf retreats have yoga classes and photography sessions as part of their program. Yoga helps guests become more flexible for paddling and riding waves, and the video and photo analysis help students see their flaws and fix them.

At my retreat, the instructors were experienced and the students were riding waves by the second day. They had three surf sessions daily and a theory class where the students were taught about types of waves and how to read them. There was an hour yoga class after lunch.

What is a beginner-friendly wave? First, it should be easy to paddle out to and ideally have a sandy bottom where falling comes with less severe consequences. Second, it shouldn’t be bigger than knee to waist high while still having enough push for rides longer than a few meters. And third, it should not be crowded. Although Pavones is a well-known spot, there are plenty of other beaches close by that break smaller and have fewer surfers.

One place, in particular, has a section that breaks in deeper water but is far from the peak and the pack, allowing learners to catch waves on the outside rather than fumbling around in the whitewater. The Surf Expedition crew also took the guests on a boat trip over to the other side of the Golfo Dulce to catch some uncrowded rights. The instructors checked a few spots daily, determining the safety of the break at that tide and the number of other surfers in the water. If it was crowded, there was always another break a kilometer up the road.

Overall, a beginner’s surf retreat should have these five features if they want to be successful. Travelers looking for this type of experience should do their research to find that “hidden gem” like I did in Costa Rica, and never be afraid to ask for suggestions and guidance in your search.