6 Reasons Why I Love Localism 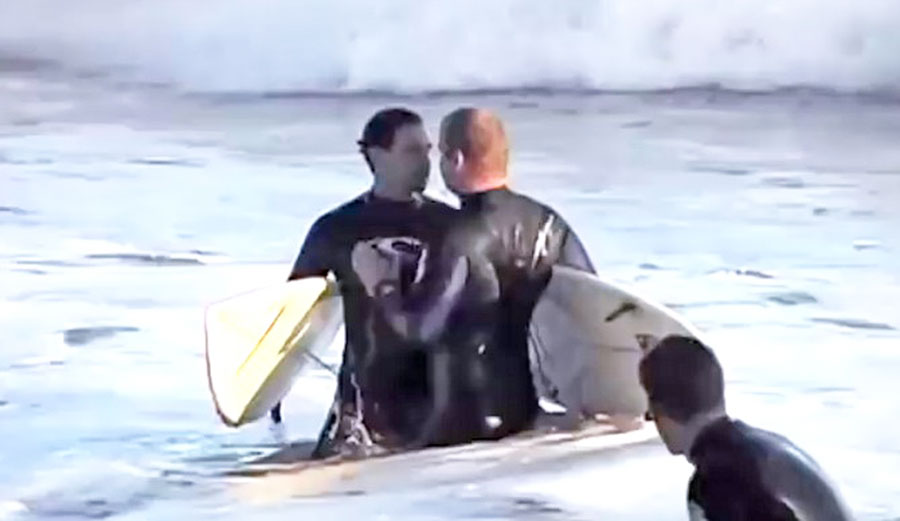 Come at me, bro. This shit is SUPER important.

Localism gets a bad rap. People are always bitching about it, and I don’t understand why. Not one bit. Without localism, everyone could just surf waves without fear of emotional and physical intimidation, assault, car vandalism, or sexual harassment. No thank you. How boring would that be?

Look, when surly locals act entitled protect “their waves”, the whiners (poor people) chime in with that “the ocean is for everyone” horse shit. But it’s NOT for everyone. It’s for the rich people who were lucky enough to have grown up next to it and had the means to spend their time playing in it on expensive slabs of foam. And if you think these lucky few are being unreasonable by acting the ornery local, consider the guy from Ohio moving to the coast, learning to surf, then four years in, he’s spouting said pony poo like “the ocean is for everyone” claiming his entitlement. Fuck that. You want to surf a great (or mediocre) wave? Be lucky and rich and white enough to have grown up near it. Simple. And if you can’t do that, you’ve got no business out there in the first place, buddy. Here are seven reasons why I just love localism. Localism je t’aime.

1. Localism helps us to take surfing, and ourselves very seriously. There’s nothing silly about surfing, or beach activities in general. There’s nothing silly about being a miniscule human on a tiny marble in a giant, ever-expanding, unfathomable universe, taking it all very personally and being angry about who is enjoying what leisure pastimes and where they’re enjoying them. Localism reminds us to continue to remain blind and refuse to have any perspective whatsoever.

2. Localism highlights and nurtures the best parts of humanity: xenophobia, selfishness, arrogance, spite, ignorance, addiction. Without embracing these core characteristics of our culture, we run the risk of becoming a compassionate, inclusive, aware, and therefore weak people. Localism helps curb the participation trophy epidemic by making sure everyone is constantly reminded that life ain’t fair, and it never will be.

3. Localism makes you work harder for the American dream. If you had parents not lucky, driven, or smart enough to raise you on the beach, you’ve gotta work doubly hard. You want your child to have the chances you never had, and be able to surf somewhere like Lunada Bay without the very real threat of being heckled and stoned, for instance? Well, you’d better find a niche, bust your ass, learn the loopholes in the tax system, and stack enough coin to buy a place in Palos Verdes. Then your kid can be a little dick headed, privileged piece of shit throwing rocks and sexually harassing anyone different from them! And isn’t that what we all want for our children?

4. Localism fosters and demands respect. It’s hard to maintain our child-like nature. Unfortunately, most of us grow up. The world does it to us. But the real dedicated local surfers are able to avoid this altogether. They work tirelessly to remain unchanged, ever in that selfish childlike state of being, remaining in the sand box bully brain space. There’s just nothing that will illicit more respect from peers and total strangers alike than a grown ass man who will physically intimidate, harass, or assault someone regarding water recreation sports and zip codes.

5. Localism gives people something to stand for, something to be a part of, something to fight for. A lot of locals have no conflict in their lives. I feel for them deeply. They live on the beach. They have a trust fund. They are overwhelmingly white. Their only conflict is poorer people trying to take their waves. So tapping into that and making it a big deal gives them something to live and die for. We all need something.

6. Localism works. Just look at how few people surf for fear of confrontation these days. Pipeline, for instance, is completely empty, except for John John Florence and Jamie Jamie O’Brien, while all the humans work for them by intimidating or beating the shit out of anyone else who tries to get a wave. And here in Los Angeles especially, localism is super logical and effective. Everyone who surfs in LA was born and raised here. All outsiders respect this without exception.  It’s wonderful how empty the line ups are, even when Surfline gives it the ol’ golden-orange “good” nod on a weekend.

Oh, I’m just having fun. Localism is stupid. Sure, there are a handful of positives to it as we’ve just been over in a not-at-all sarcastic way, but for the most part, it’s ridiculous the way it manifests itself. Yeah, surfing’s fun, and can be dangerous with idiots out there. Yeah, you want the waves all for yourself and for people to “respect your authoritah!” But as long as people keep fuckin’, we all gotta share the world. So surf and fuck and live and deal with it. Be respectful. Be aware. Gently lift the corners of your salty, salty mouth. We all in this together.