7 Ways to Take a Baby on a Baja Strike Mission 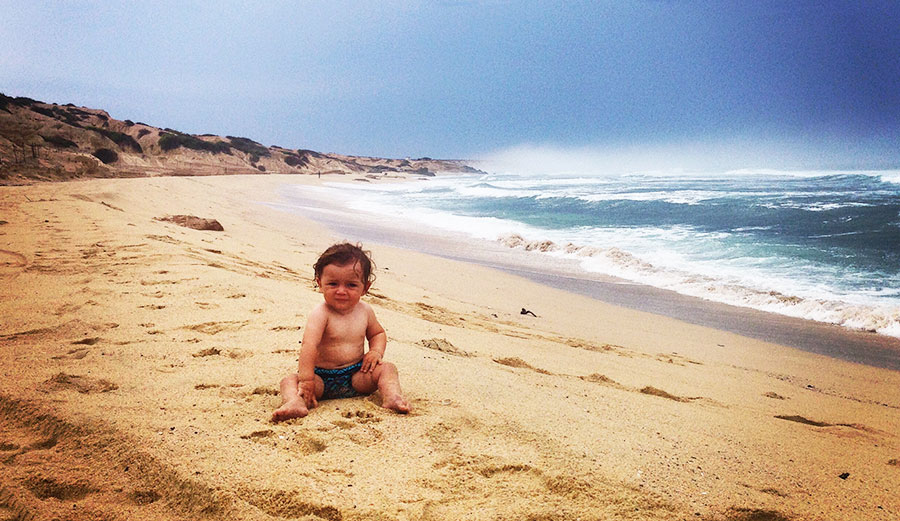 A baby isn’t the end of your surf trips. It’s just the beginning of different ones.

LIFE: all of a sudden, you’re over 30 and married.  After the love and the marriage, the next thing you know there’s a baby carriage. You wake up one day and think WTF just happened? Am I ever going to surf or travel again? More importantly, do babies even like Mexico? I’m here to tell you that babies LOVE Mexico. This one family’s story of taking a baby on a southern Baja strike mission.

My partner and I often plan surf trips based on work and responsibilities. As we all know, this is NOT the way to score the best waves. If you really want to score, you’ve got to watch the swell and book accordingly. Real life and obligations often get in the way of strike missions, but last year, we set aside time to go surfing. Despite having a 9-month-old baby in tow, we decided weren’t going to miss a good swell. We had plans to meet friends and family in Scorpion Bay, but when we saw a big red blob on Surfline headed for Cabo San Lucas, we changed our plans.

I knew the area and planned to show my family one of my favorite places on earth: the East Cape of Baja California, Mexico. The East Cape is the expanse of desert dotted with a few tiny towns that lie to the east of San Jose Del Cabo and Cabo San Lucas. The roads are dusty and rough (but constantly being improved and paved) and there are no stores with basic things like ice and water within 45 minutes of where we wanted to surf. Ice is a big deal in the desert, not only to keep the beer cold but also to preserve food and milk for our baby. While camping here is epic, we were coming from Australia and not kitted for that kind of mission. Thus, we booked a palapa (basically a gazebo with a palm-frond thatched roof and open sides) on Airbnb on a property near the break.

Of course, many people think the challenge of traveling with a small child is insurmountable.  Some new moms and dads won’t even take junior on a car ride to grandma’s house, let alone take a baby on a remote surfing adventure.  When our daughter was born, we refused to hang up our wetsuits and give up surfing.  Similarly, we refused to give up our semi-annual pilgrimages to far-flung surf spots. With some minor logistical adjustments, we found that you can take your baby, and eventually toddler/kid on a surf trip and that his or her presence might make the trip even better.

Once in Mex, our baby settled into our Baja routine: surf, eat, play with baby, surf, shade, surf, eat, sleep. The next few days we absolutely scored! The point is that a surf trip like this is doable with a small child.  Of course, you’re not wild, young and unencumbered anymore, so you need to come prepared. Babies don’t mean the end of fun if you get organized and thus, these are my tips for a Baja Strike Mission with a baby in tow: 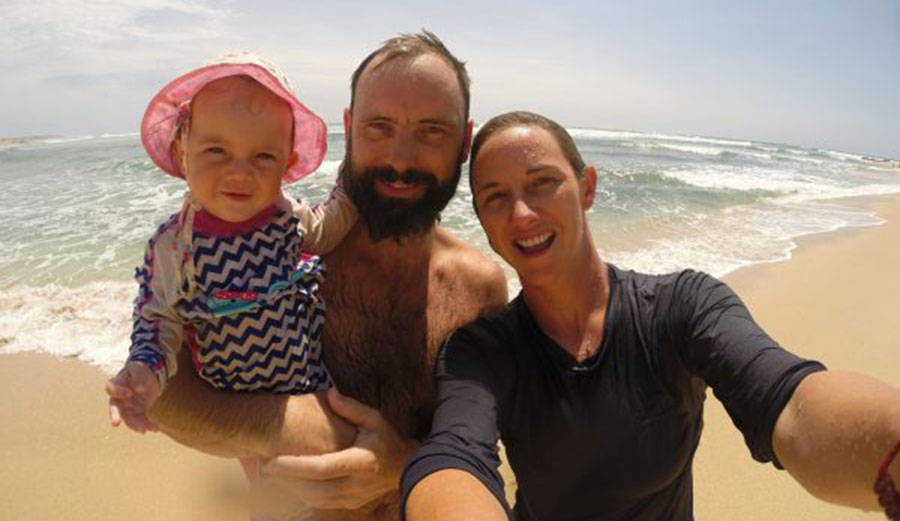 1. Rent a 4×4
Before we left, we debated renting a Jeep 4X4 because it was much, much more expensive than the other cars. And guess what? When we landed in La Paz, the guy at the rental counter decided that it was going to be even more expensive than we expected. My Spanish is functional to find waves and order tacos, but I am not quick enough to haggle daily rental car rates, mileage, and insurance. But in the end, it was worth whatever astronomical price we paid after the conversion rate. We could drive anywhere, check any spot, park on the beach while our daughter napped. Plus, we got to take down the top of our Barbie Jeep and park it right next to our other gringo mates at the surf break. Priceless.

2. Create a mobile kitchen
It only took us a prior trip to Baja and a trip to New Zealand to learn to come prepared to build a mobile kitchen, even if you are arriving by airplane. This time we checked an empty cooler, a cutting board, a couple of knives and cutlery. We were ready to go when we landed rather than spending all day fixing up our mini-cocina at Mexi Wal-Mart. Since we could only keep ice for a day or two, we only bought perishables for those days. We ate a lot of sandwiches and cold tacos with avocado, mayo, cheese, and salami. Normally, we were just so damn hungry after surfing it didn’t matter what we ate, just as long as it was washed down with a cold Tecate! Our 9-month-old wasn’t quite ready for the Tecate, and she was really only eating a bit of banana and avocado at this point. She mostly chugged a lot of air-warmed bottles of formula we brought from home and mixed with bottled water. We also cut up fresh fruit and veggies for her to gnaw on as needed.

3. Errbody in head-to-toe rashies all day
Our daughter has several super stylish, full body rash guards that she wears on the regular.  Unfortunately, such items are not exactly en vogue for the rest of us. I bought some sun shirts to wear and basically wore them all day–wet and dry, surfing and on land. It should go without saying, but you have to stay on the sunscreen and covering up because you are getting blasted by the desert sun all day long. Also, pack a beach umbrella in your board bag. Of course, this is a good idea even without a baby, but now that you’re a parent, you’ve got to set a good example, right?

4.Learn some Spanish
My very Australian counterpart was an apt student and was able to pick up the basics from me and put them to use when ordering food or getting gas. As I mentioned before, I speak functional Spanish which makes it possible for me to ask about the surf or have a joke with the gasolineras (gas station attendants). Get familiar with basic greetings, how to ask for food, and maybe learn some surf terms like olas (waves), high tide (marea alta), low tide (marea baja), grande (big), pequeña (small), rocas (rocks), or arena (sand). Also, learn how to answer when people ask “cuanto meses tiene el bebe?” or “How many months old is the baby?” Again, good advice without a baby.

5.Make friends with the locals
Strangely enough, this part of Baja is largely inhabited by gringos (white people) who come for surfing and/or retirement. You’ll be sweet with language but you may encounter the salty old ex-pat or two, the I’m-local-in-a-country-where-its-impossible-for-me-to-be-local type. I usually just smile and try not to burn them. Give respect to get respect. The fact of the matter is that many of these people are isolated and would love to chat once you break down the initial get-off-my-wave barrier and these guys almost always have a story to tell. You’ll find you see the same people day-after-day, doing the same surf check circuit you are doing. Give them a wave! Share a beer! Flash your baby, because even real assholes tend to smile at babies.

6. Get out of the sun and spoil yourself
We were on a hardcore surf trip with a nine-month-old. When one of us came in, the other went out and we’d repeat the process until we were exhausted. Our daughter alternated between playing on the beach, napping in the Jeep with all the doors open and swimming from 6 AM onward. When the wind picked up around noon, we’d come in and make lunch. Then we’d GET OUT OF THE SUN until around 5 PM. Most days we drove into town for supplies and went to the Cabo Surf Hotel and drank a cocktail in the pool or laid in the shade. Babies can do surf trips, but you have to take breaks and make sure they get out of the sun for a large portion of the day.

7. Don’t let Dad get too drunk and lose your stuff
Finally, an always applicable rule, don’t let dad (or mom) get too drunk and lose your stuff. I went out for my fourth surf during the evening glass-off. We’d been at it all day, but there were only a few guys out and my partner seemed content to play with our daughter and drink beers with the boys. I left him with my nice DSLR camera to try and get a good pic of me. By the time I finished surfing, I packed up the family and drove us back to our palapa. Night fell on the desert. The next day, the camera was nowhere to be found. We combed the beach but never found it. I am not sure what happened, but my theory was drunk dad left it on the sand and it either got covered up by sand blown in the wind at night or picked up by a lucky person. Either way, you are in a remote place. Keep your wits up and remember if you leave your camera on any beach, it will probably be gone by morning. And then, of course, you’ll have no pictures of your baby on a surf trip.

If you’ve done any traveling through the Baja Penninsula, you know every Baja trip is different and that you are guaranteed to face your share of challenges–especially if you’re traveling with a child. But Baja builds character and makes any person who crosses its deserts, swims in its seas and eats its tacos a better traveler. Ditto for tiny Baja warriors. Having a kid isn’t the end of surf trips to Mexico. It’s the beginning of creating a bad-ass little human who loves Mexico just as much as you do.