8 Reasons Why We Need More Fighting in Surfing

When we’re fighting, we’re telling the truth. Especially once it turns physical, the bullshit barrier snaps and we pour it all out there. Body language speaks louder than words. It reveals the subtext, the truth. Fighting is honest and it is real. And I’ll go ahead and say it, we aren’t honest enough of the time. We’re not real with each other. We don’t fight enough. Especially in surfing.

What if every time we suspect having been slighted, instead of communicating with inadequate words, “brushing it off,” or turning to wit and sarcasm or offering up a passive-aggressive gesture, we started honestly dealing with our feelings like adults? What if we could be candid with each other and jump right to expressing our emotions physically, revealing our truth through confrontation? I believe we would all be better off.

Here are eight reasons why surfing needs more of this:

1. Hand to hand combat at sea or on sand is a tremendous workout.

Besides being killer cardio, chasing someone down on the beach to deliver an ass-kicking is great for the muscle stabilizers in our feet, ankles and knees. And you’ll never get the same fight twice, causing muscle confusion. But the real results come from just throwing down out in the water. Swimming and treading water is already great exercise, but doing it while trading blows with a fellow water recreation enthusiast is far superior. Fighting in an ever-changing medium such as water activates our core muscles in a thorough and unique way, boosts heart rate and metabolism, and promotes that sexy, primal, quick twitch, type II muscle fiber. Believe it or not, water fighting is also good for the back, as the forces of gravity are significantly reduced in water.

2. It helps us learn to properly deal with stress.

When we fight, our brains release a surge of epinephrine and norepinephrine, the fight/flight hormones. The better we get at choosing fight over flight when faced with a stressful situation, the less we will cave to fear, and the more epic our lives will be in general. We’ll get barreled more, nail our presentations at school or work, ask out that beautiful woman or man or he/she, cold-cock the parking cop after he says “I’ve already written the ticket”, and avoid being someone’s bitch once in jail for having assaulted a parking cop. Surfing is all about “grace under pressure.” Being able to take off late, stomp an air drop and transition effortlessly into a girthy bottom turn will bring confidence and grace to our lives, sure. But being able to get safely to shore after losing a brutal fistfight with a surly local truly exposes our potential.

3. Taking down another human in the ocean over waves of energy meeting their timely, violent demise teaches responsibility and accountability.

When we knock someone unconscious out in the water, you’d better believe it’s our duty to save them. Learning basic rescue techniques, and being proficient at CPR is essential for any waterman.

The universe is unfathomably gigantic. You know those inspirational posters and memes, the ones that show vast swaths of stars then have an arrow pointing to one tiny speck that says “you are here?” Yeah. We are there, at the very center of the universe, punching one another while participating in our mutual, beloved past time. Anywhere could be the center. Why not recognize that it is here and now? It’s time to take everything personally. Surfing is not recreation. It’s not fun. In the grand scheme of things, surfing isn’t the biggest thing in life. It is the only thing. And if that isn’t worth fighting and potentially dying over, buddy I don’t know what is.

5. It will teach respect.

Kala Alexander explained it best when he said “The code is to respect other people. People come over here and don’t respect other people.” Which is why members of The Wolfpack will dutifully and respectfully put disrespectful surfers in headlocks and punch them in the back of their heads with respect.

Just look at what a good job the aforementioned Wolfpack does at Pipeline. There’s hardly anyone surfing there ever. When each surf session is approached with the expectation that we will more likely than not be fighting anyone and everyone we even perceive to have been slighted by out there, we will notice our break clear out. More fights=more waves.

This brings natural structure back to things. Those who can physically subdue others around them get first dibs on everything. As it should be. I’m tired of this everyone gets a medal (wave) mentality. If you want to ride, you ought to be willing to pay for it in blood.

8. It will curb the collective fear of sharks. 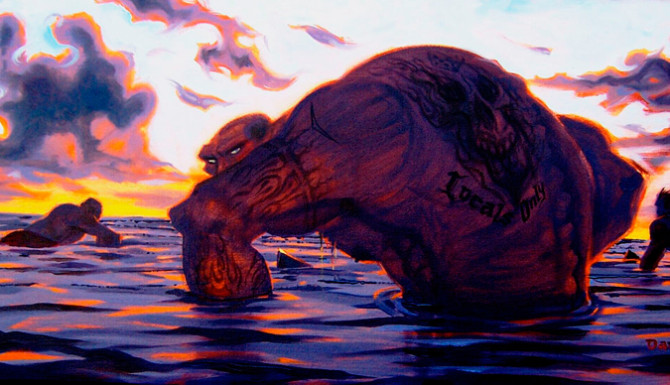 Not a friendly face. Art:DamianFulton.com.

If we’re always on edge looking out for that fist in the back of the head, or an opportunity where we can deliver a viciously sincere elbow to somebody’s spine, we sure won’t be able to worry about fish. As an added bonus, if we ever do encounter one, we’ll be prepared and in the right mindset.

It is my hope that by being honest with our feelings and physically engaging one another more regularly, surfers can not only have a much more authentic and rewarding experience out there, but demonstrate to the rest of the world how to act like adults. Let’s drop our pretences and put up our dukes. My hopes are lofty, but my reasons, as you can see, are completely sound, legit, righteous and to be taken seriously.