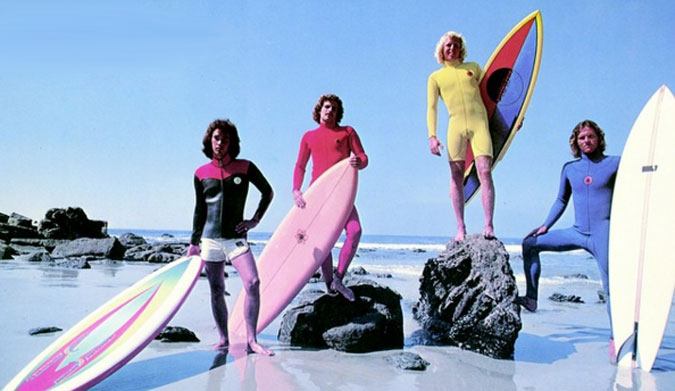 There are so many reasons to love wetsuits. Like their cheese-making abilities! Photo courtesy of Body Glove/Instagram

Wetsuits are a blessing. If I could wear one all the time, I would. In fact, I often do. I have on my 4/3, booties and a hood as I type this, for no other reason than it’s what I woke up wearing today.

Beyond their most common function of keeping us warm and toasty while we sleep, wetsuits have many other lesser known but equally important benefits. So many that I felt the need to compile an exhaustive, gravely serious and thoroughly researched list of said benefits. So with only a touch more ado, here are nine reasons why I love wetsuits. Feel free to add your own reasons below!

Alternatively, if you have an insatiable thirst for high caliber, no-nonsense surf journalism and feel personally offended that you didn’t get that here because this contributor is too nonsense for your taste, then write about that in the comments. That’s good too. Better, even.

1. I love being able to piss myself while wearing a suit.
We’ve created a society where, for whatever reason, pissing yourself is generally frowned upon. As a matter of principle, it feels pretty liberating to just break that neural pathway that’s been ingrained in us from such a young age and let the warmth spread. Suit up and let ‘er rip before you get in the water. Preferably in the parking lot or side of the road. Watch your confidence soar. Once you’ve tackled that, push it even further. Sometimes I’ll even just pee in my car before I get to the beach. In fact, I’m peeing right now. We mustn’t always just pee where the man says we must. Take your freedom back by pissing all over yourself whenever and wherever you want to.

2. Trying to take off a wetsuit after a particularly frigid surf tests your dexterity and patience.
Mustering the coordination and strength in your hands and thumbs when they are frozen and rendered useless forces you to really dig deep to figure out how to get it off. More times than not I’ll completely lose it and end up cutting my suit off with scissors. This gets very expensive, and so forces me to learn patience as I must wait until I get another pay check to surf again.

3. A good wetsuit also doubles as a shockingly effective male birth control option.
When women take the pill it can screw with their hormones, and condoms are just the worst. Be a gentleman and opt for a wetsuit a size smaller than you’d normally wear. That way it crams your goods together and jams them up inside you, minimizing sperm production. Wetsuits are also a very effective means of contraception if worn during the actual act of sex itself.

4. Wetsuits promote a positive body image.
There’s nothing to hide when you’re in a wetsuit. This can give you lots of confidence if you look great. If you don’t look so great, it points that out too, which can be a wonderful motivator for getting in shape. Or it can prompt you to give up surfing altogether, which is wonderful for the rest of us.

5. I enjoy dabbling in artisanal cheese crafting.
Depending on where you surf, how long you leave your wetsuit wadded up in your car, and what time of year it is, the varieties of cheeses you can make by neglecting your wetsuit is staggering. Last week, after leaving one of my shredded wetsuits wadded up in my car for 72 hours, I made a particularly pungent late summer, trunk-aged gruyere that sold for $98/oz at the local farmers’ market. With this financial windfall, I was able to buy another wetsuit.

6. I enjoy doing my part to bolster the environment’s gumption.
Wetsuits are made from environmentally challenging materials. And despite the common misconception, we actually have to be tough on the environment if we want it to improve. There is overwhelming research to support this. Think of it like this: a strong chest is built by regularly burdening it with weight, so it stands to reason that a strong environment is built by consistently burdening it with toxic materials for our frivolous pursuits.

7. Wetsuits make surfing actually hard.
Any Average Joe can pull off a nasty 540 in board shorts, but doing it when you’re all constricted and bound by neoprene is actually a little impressive. We become better when we are challenged, just like the environment.

8. Wetsuits allow for chafing.
Chafing is great because it can keep us focused on a relatively light to moderate and manageable pain instead of the greater pains of humanity such as the Syrian refugee crisis. Chafing I can deal with. Barbarism, ignorance, genocide, intolerance, hate, and despair I cannot. As long as I’m distracted by my own chafing, I’m not too worried about the Middle East.

9. The price keeps the riff-raff out.
Wetsuits are relatively expensive, which keeps surfing in the winter and in cold waters a rich man’s sport. No one wants to surf among the poor. Let’s just be honest. It rubs off.