A Kook’s First ‘Cane: Riding Out Dorian at Home and Waking Up to Waves 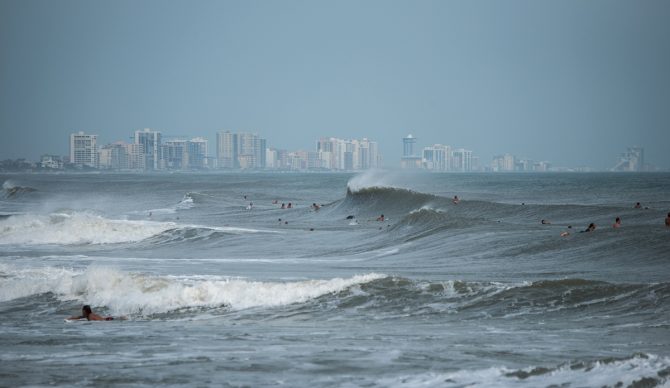 This is why I moved out here: surf my brains out on the regular, enjoy some hurricane swells, hone in, and refine my game. Apparently, that’s greedy, like wanting to eat and expecting not to cook or clean. I wasn’t about to have the waves without the storm.

The media hyped Hurricane Dorian’s inevitable onslaught but it didn’t really resonate with me until 3 a.m. the night before he, she, or whatever non-binary storm was expected to hit. Pulling over to get gas, I had a pit in my stomach. Burly, bearded dudes in flannel, camo, and rain boots were filling massive Jerry cans with gas. They filled them one-by-one and loaded them into their pickup trucks without a flinch of emotion on their faces. What the hell was I in for? In a slight attempt not to look like a kook, I just filled my tank and not one of the small five-liter gas cans they sold at the station. Maybe storm cigarettes were an appropriate purchase at this time.

Buzzing with some nerves and maybe the last medium regular with milk I may ever drink, I got into the zone. I needed water, eggs, bacon, chips, more water, and anything else that caught my non-blinking eyes. There weren’t many people at the store yet but some mumbles of the storm’s size and time it would hit could be overheard. One lady joked that she and I were beating the crowds and the inevitable rush to come. This didn’t exactly comfort me but I think I let out a chuckle. Leaving the store with my bread, bacon, 20 liters of water and No-Name peanut butter (no time for that natural shit), a man stoically told me to be careful out there. Like, again, what’s the protocol here? This Kitchener kid was in unfamiliar territory.

Driving home the anticipatory adrenaline continued to flow at an alarming rate. Some 12 years ago I had a rare tumor called pheochromocytoma and with it, they removed one adrenal gland too. Conversations with my deceased brother ensued as my Subaru chugged along through the building wind. Of course, it was all a bit dramatic, but hey, I had to let him know I wasn’t ready to see him yet. I’m sure he was laughing and telling me to “call the wahmbulance.”

News reports had Dorian hitting with varying estimated times; so said the local coconut wireless gossip.  After returning from the grocery store, the power was sure to go out soon so I maniacally cooked all the food I could. Two-and-a-half pounds of bacon,  taters, two dozen eggs. Is this what you do? I had no clue — a kook’s first ‘cane. My calm-like-a-bomb salty roommate wasn’t phased. She had a big bottle of wine, a mandolin, and two little hellions to entertain as the sea breeze started to make our cedar shakes, uh, shake.

So we cooked and used power until it went out in the afternoon. Dorian finally hit at approximately 3 p.m. We cruised a few minutes down the road to see the ocean in her glory. The wind-surfers were either in their element or just crazy. The wind was hard and the ocean flexed her muscles. I had seen enough. I was more than content checking the storm watchers’ tacky Instagram updates. My Subaru chugged between gears but slowly made progress. Getting stuck in sand three minutes from home wasn’t on my list of things to do this day.

The hurricane hit, the power went out, we cracked a few pilsners and watched the show. Feeling brave or just dumb, we risked getting in the mix for a bit. We left the house to smudge the ceremonial Acadian tobacco and feel Dorian’s wrath firsthand. Watching the ground around the roots of a tree shift and loosen as the winds slammed us was a trip. Seeing such movement around the base of a tree like that was eerie for me.

Back inside, the hurricane party continued with some mandolin playing, candlelit Indo Board action, cervezas, and just the suggested amount of chips. The wind thrashed away and eventually, the eye of the storm made its way through my humble pueblo. I couldn’t miss that opportunity to check it out. With zero wind and not a sound to be heard, the eye of the storm brought welcomed tranquility and all the mosquitos. Instinctively, I’m sure, a great blue heron flew away and the storm continued. Strong winds continued throughout the night but the worst was over.

Morning glory was revealed as Dorian brought corduroy lines up and down the coast. The sun was out and the buzz of generators and chainsaws (two things I failed to grab from my local grocery store) could be heard from my backyard. Gawkers lined the sides of the roads to check the waves as actual surfers huddled in the known and not so known spots to bask in the bounty of something that suddenly didn’t look so destructive.

What an interesting difference in mood from anticipating, realizing and scoring a hurricane. I went from nervous to pumped, back in my element in a short span of time. My friends scored hard and surfed their brains out. Vibes were all-time in the water.

The final celebration was a toast to the waves with all that pre-cooked maple-black, pepper-rosemary bacon on a  sandwich with storm peanut butter and storm bread. We slammed them back with some beers to chase. A solo skater rolled through the parking lot looking for a single rolling paper. I spared a square and we smudged again in celebration.

From the Author: All my sarcasm aside, Dorian did some serious damage to the Bahamas and many lives were lost, let alone displaced. If you’re so inclined to help out, you can learn more here.