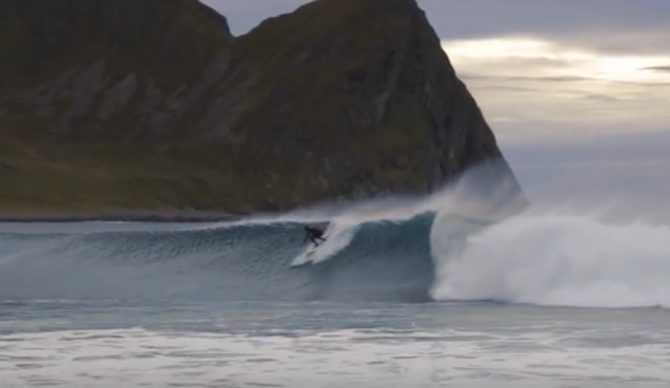 I’ve been wanting to film a music video for Hanging Valleys for a long, long time now and the stars finally aligned when I had the opportunity to visit a couple of friends who had recently moved out to Norway. Before I got out there I knew two things: ‘Endless Wave’ was the song I wanted to shoot for and Unstad would be my base and focus for the video. Other than that, I didn’t really know what to expect. Would I be able to get close enough to the waves? Would the conditions be any good? Would it rain every single day I was there? Luckily everything seemed to work out!

The weather in Lofoten is pretty crazy, I arrived early Autumn, just as the ‘Midnight Sun’ period had finished. In fact, I think the night that I arrived was the first time it had been truly dark since my friends had arrived earlier in the summer. The days were still super long, though. You could head out to watch the sunset around 10pm and still see the sun just behind the horizon come midnight. Pretty incredible to witness and perfect for sunset photographers!

The beauty of Lofoten this time of year is that along with the darkness, comes the opportunity to see the Northern Lights. Obviously, this is never a given, as apparently it can rain in this part of the world for literally weeks at a time (reminds me a little bit of England!)…but I was lucky enough to catch three clear nights during my visit, all three of which we had some pretty incredible auroras!

Unstad itself is stunning. You arrive by driving through a short tunnel that takes you through the mountains. As you emerge out the other side you get a first glimpse of the town – A huge valley surrounds the beach on three sides and in the distance a small collection of houses are dwarfed by the surrounding mountains.

Apparently, the town has a population of 15 people…so, as you can imagine, there’s not a lot of activity there. There’s not even a shop to buy groceries from in the town itself, but there are two surf shops. It doesn’t take long to realize that Unstad is a destination first and foremost for one thing and one thing only: surfing. On a busy day, the two car parks at either side of the beach are filled with eager surfers suiting up and socializing. There’s a real community feel with everybody seemingly happy to mingle and exchange contact information etc with strangers from all across the world.

Of course, there are also the quiet days. Sometimes it feels like the town is practically empty and you can have the entire beach to yourself. On one of the days, I went for what was supposed to be a short walk. I followed a hiking trail up around the side of one of the mountains and continued on it until I reached the farthest point out to sea. Looking back you could see the entire town and valley. It looked so tiny. The sun came out and I sat down for about an hour listening to nothing but the waves below. It was probably the most peaceful place I’ve ever been. These moments are pretty special, as you can really absorb the incredible scenery that Lofoten is famous for, all whilst completely forgetting that the world is still turning. That feeling of isolation leaves a powerful impression, and I think is probably one of the things that I will remember most about my time out there.

Filming the video itself was a challenge. For the first 10 days or so the waves were so so. They were great for the surfers, but not so much for filming. What I needed was a huge storm to bring a big swell…and a few days before I was due to fly out I finally got what I was after! Giant 10 foot, clean waves barreling perfectly. The storm did bring some crazy weather, though, and normally I try to keep my camera inside when it’s raining out…but there was no way I was going to miss this!

By purchasing myself on one of the last rocks, I was able to get to within about 20 meters of the surfers. This did come with its own problems, however: The changing tides caught me out on a couple of occasions, not to mention the crashing waves trying to take my camera for an early bath and the flimsy umbrella I was hiding underneath attempting to take to the skies every 30 seconds. Luckily, though, my camera and myself survived, only falling into the water once during the two weeks!

Lofoten really is a beautiful part of the world regardless of whether you’re a surfer or not, but if you are – it might just be paradise.