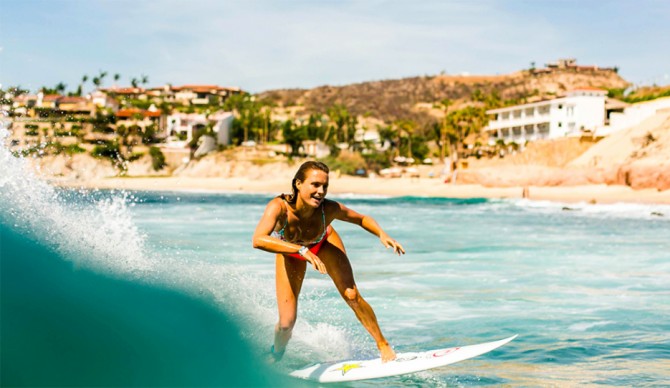 “With regard to sexism in surfing, women’s surfing has had to contend with copious bias and flagrant dismissal.” Alana has surely seen both sides of this. Photo: Magi Kernan

In a recent opinion piece, J.P. Currie [attempted to] address the weight of physical appearance in surfing’s sponsorship equation, in particular with regard to women.

The first thing that I would like to point out is Currie’s spiel about the injustice of surfing and of life itself. He writes, “Competitive surfing is a game, and it’s a game which that revolves around money, marketing, and, truth be told, pretty faces.”

Competitive surfing is a points-based affair. Is it perfect? No. But technically, the only sponsorship at play on the World Championship Tour (and the road to get there) is that of the events themselves. Of course, surfers with major sponsorships can better afford the extensive travel required by the WCT’s rigorous competition schedule. And before you scoff at my use of the word rigorous, bear in mind that these events often take place in rapid succession and require a minimum of two to three hours on a plane in travel on very specific dates, which isn’t always conducive to purchasing cost-effective fare. Best-case scenario, travel between stops three and four (Margaret River and Rio de Janeiro) will cost $1,600. Honestly, it’s likely to cost a lot more, depending on how surfers fill the three weeks between the two comps, and that’s not even factoring in accommodation.

A place on the WCT is a privilege, but travel is both financially and physically exhausting, so it helps to have the support of a sponsor. That said, qualification for the tour and retaining one’s spot amongst the elite is all about “speed, power, and flow” – and the rest of the official judging criteria.

On the other hand, an argument could be made that freesurfing, a type of noncompetitive professional surfing, is about “money, marketing, and pretty faces.” Naturally, we know that it is also (and mostly) about talent, but yes, there’s no question that physical appearance factors into freesurfing contracts. Freesurfing is a mutually beneficial relationship between surfer and sponsor; the goal for both is (usually) publicity. Like other advertising it’s also subjective. And it’s allowed to be. But that doesn’t mean that we have to agree with sponsors’ priorities in choosing who to sign.

Here’s a question I’ve thought about a lot: If the best surfer in the world didn’t have piercing blue eyes and a chiseled jaw, would we ever know his name? The “sad fact” is that we probably wouldn’t. I believe that is true for both men and women. Though I have faith in the dream-come-true potential of the WSL point system, I also know that it can be nearly impossible to make it happen without strong financial support or substantial independent wealth.

With regard to sexism in surfing, women’s surfing has had to contend with copious bias and flagrant dismissal, often because “girls are pretty.” And only pretty. But the “pretty” are slapped with accusations of possessing beauty and little talent, so it’s not easy for women to navigate professional surfing. Despite this, women’s surfing has proven itself. Not only has it earned the world’s respect (with the exception, perhaps, of Currie), but it knows itself. It’s powerful, strong, and beautiful. It’s barrels, behemoths, big airs, hacks, fin blows, soul arches. It’s graceful, but it’s still hungry, and isn’t that what drives progress?

Instead of scolding Silvana Lima, we should be thanking her for her honesty. Her experience is her experience, and do we really have a right to question that? It should also be noted that she is not the first person to broach this topic, nor is she the only one to overcome this obstacle. Sometimes, we do need to acknowledge defeat, but we also need to maintain our dignity and our self-respect. When we see potential for improvement, we shouldn’t simply let it go and accept that the world is a certain way.

And finally, as for the blatant cultural and sexist slurs scattered throughout this editorial, well, I knew they were coming the minute I read, “I got smoked by a chick this weekend.” I see potential for improvement.