A Surfer/Environmentalist’s Response to the Huntington Beach Riots 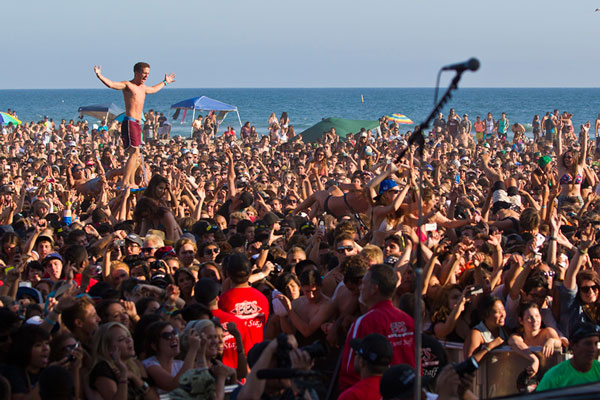 Madness at the US Open. The good kind. Photo: C. Bahn/usopenofsurfing.com

When I first moved from Santa Cruz to San Diego, you could still drink alcohol on the beach. I remember walking up and down Ocean Beach with a bloody mary in hand working off the hangover from the previous night’s fiesta and talking to a police officer at the same time. Never obnoxious or inappropriate, I would have a nice, “Good morning!” with the SDPD and be on my way. If I were to do that now, I would get a hefty fine. It all changed because, after a few summers and holiday weekends, a bunch of tourists, college students, and a few idiot locals came together to fight. Being fueled by summer heat and alcohol, and sparked by a drunken slur, these fights lost San Diego County the ability to drink alcohol on beaches. Now I awake to see that after the US Open in Huntington Beach, the photos and riots have opened Pandora’s Box yet again.

Unfortunately, this is what will be remembered from the 2013 US Open. Not the heats leading up to Carissa Moore or Alejo Muniz winning. Not Modest Mouse. No. This is it. And THIS is what people will think of Californians. Great.

Those of us who take pride in our beaches are going to have to clean up after this. Not just the physical mess, but also the stigma that comes after it. We have to pay the price because of people who don’t understand the interaction of humans with the ocean ecosystem. To those boys and girls who destroy our reputation: you are jackasses.

I have some questions for anyone who participated in the riots. Do you think people just surf to party? Do you just wear the clothes to look a part then chug a beer, talk like Jeff Spicoli and then take a swing when someone doesn’t agree with you? Do you migrate from anywhere to be at events like the US Open to just get lit and partake in what you identify as appropriate beach lifestyle, then just hop in your car to go home leaving a mess behind? If you answered yes to any of the above questions, then you are a kook of the worst degree. Not just that, but you are an ass. We don’t want you here.

Californians who live along the coast and take pride in our beaches are a pack of people who follow in John Muir’s footsteps. Yes, we know how to have fun, but we don’t get livid and trash our land. You send a balloon into the air thinking it’s a wish to come true whereas we find that balloon in the ocean and stick it in our wetsuits. We know how to have a good time, but not at the expense of our environment or tarnishing the name of a sporting event.

We don’t act like an extra from Point Break.

The people who rioted get to go home and it’s a vague memory. But those of us who remain here have to live with the reality of it. We have to pick up the remains of the reckless night, lack of judgment and raised blood alcohol content.

Although I am not a fan of localism, this is an example of why it exists. The negativity just perpetuates more negativity. It’s a vicious cycle, and unfortunately, if it’s to stop, people are going to need to man up and act like adults not like children entitled to fight because they threw on trunks or strapped on a bikini and have a Solo cup in hand.

I am asking everyone who visits our beaches and events to do so with respect. Please pick up your trash. Please know it’s time to stop drinking when you can no longer say, “Habitually I am a respected citizen of this county,” without slurring. Please stop the PDA where you could be interchanged in a scene for Girls Gone Wild and nobody would blink an eye. Also, please stop getting so angry and stop perpetuating an image that we are mindless-rioting-hoards.

We are so much more than any of that.

Warning: The below video may contains disturbing and explicit content.