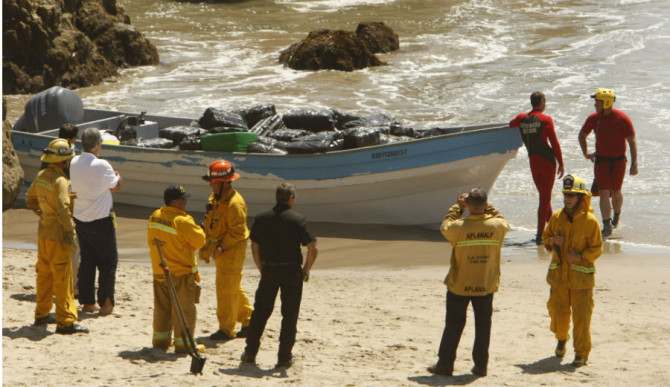 What a swell. According to a Los Angeles Times news break, this past Monday, a panga packed full of zips — reported to be nearly a ton of pot, both literally and figuratively — washed ashore a few miles west of Malibu. An update by NBC Los Angeles explained that a couple of park rangers spotted it on their morning patrol. They then promptly notified the police, and soon thereafter found three dudes looking like they were up no good, making the same number of arrests before tending to the 2,000 pounds of weed wrapped in black trash bags.

Seriously, though. A ton? That’s a good $1,000,000 in street value — a whole lot of money. Think of the American dream, man! Founding brah George Washington, the good hemp grower that he was, would’ve de-stemmed, set up shop along the PCH, and gotten a good position on Weedmaps for those making the commute. Or packed up and made course for Coachella. But the park rangers did the moral or otherwise lawful thing in calling the cops… right?

While the detained definitely had a rough start to the workweek, high five to Gordon Tokumatsu for thinking outside the boat and making sure those others affected by the war on drugs got their due diligence: “Some dealer here in California just lost a whole bunch of weed. And money.” Truth, Gordon. Truth.