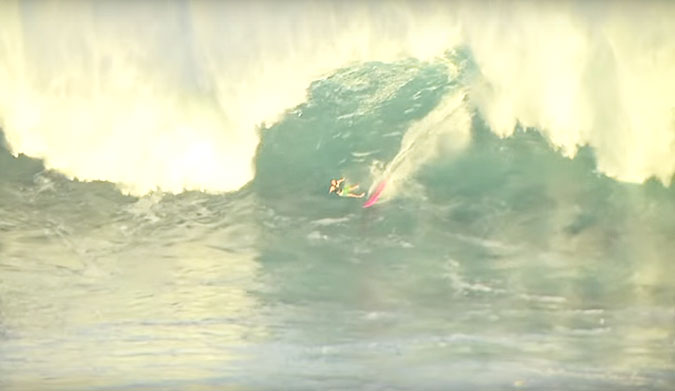 19-year-old Adam Amin on the tail end of a insider at Jaws.

I’m sure that upon reading this headline most of you will presume that it is sensationalist click bait. I would have, too. When I read that a 19-year-old from Devon, England, with only five years of surfing experience behind him, bought a ticket to Maui and paddled out to catch a wave during the Peahi Challenge, I thought it could only be a joke. But it seems that is exactly what happened.

After my initial disbelief, my overwhelming secondary reaction to this story was one of irritation, mainly at the way it has been reported in the British press. The exploits of Adam Amin have been  sprayed liberally with words such as “conquered”, “fearless” and “incredible”. Conspicuously absent are words such as “naive”, “reckless” and “idiotic”. Rather than being praised for his bravery, Adam Amin should be slapped for his lack of respect, particularly given it happened in Hawaii.

When I read about the story I immediately rang the UK’s premier big wave surfer and Nazare legend Andrew Cotton. Given that Cotton is also based in Devon and has dedicated a lifetime to the pursuit of giant surf, I expected he might have an interesting perspective. I was surprised to hear that beyond the Jaws story Cotty had never heard of Adam Amin. In a comparatively insular surf scene like the UK, much less Devon, this speaks volumes.

I was not surprised, however, by Cotton’s take on the whole event. Despite major press coverage and multiple Billabong XXL nominations for his own big wave exploits at Nazare, Portugal, Cotton has always remained humble and never really considered himself as a surf star. His opinion was very much in the vein of: “Fair play to the lad, he has to get respect for giving it a go.”
Cotton is perhaps sympathetic to a situation that he sees as not so different to his own route into big wave surfing, receiving both plaudits and criticism along the way. He himself surfed Waimea when he was 19 (at the time still a big wave proving ground) and was rewarded with column inches in the UK surf press. His view of Adam Amin is that he is just a big wave newbie, desperate to prove himself in a world which is notoriously difficult to break into.

I would question whether Amin’s actions were rooted in uber-keen, naive ignorance, or a calculated stunt.  We all appreciate the democratic nature of surfing, but those of us with sense and experience realize that often the safest way to operate at a given spot is by a system of meritocracy, not democracy.

With merely 5 years of surfing under his belt, Adam Amin had no business being in the line-up at Jaws, regardless of how much he wanted to be. In giant surf, safety, knowledge and experience are paramount. Adam Amin knows little of any of these things. The saying goes that “a team is only as strong as its weakest link”, and Amin was by far the weakest link in the line-up at Pe’ahi. By being foolish enough to attempt to ride waves beyond his surfing years and inevitably getting rescued, he endangered not just himself, but the lives of every dedicated, prepared, and time-served waterman around him. You can watch his wave from the 12 second mark to the 16 second mark in the video below:

It has been reported that after Adam Amin failed to sneak past security on the morning of the comp, and again failed to hitch a lift with any of the boats leaving from the harbor, he attempted to make a five-mile paddle to the line-up at Jaws. According to Andrew Cotton, who is familiar with the area, this was “the most foolish thing he did.” He went on to say: “I know exactly where he paddled out and how long the paddle is, and that in itself takes a lot of guts.”

There is a thin line between having “guts” and being dangerously reckless. This is especially true in the world of big wave surfing and is something I have reflected on in the past. I just can’t subscribe to the fact that what this boy did was anything other than stupid. To a degree, I respect his audacity, but this is far outweighed by my respect for the ocean.

According to BBC, Adam Amin was picked up by Greg Long and taken to the line-up on the back of his ski. I wonder if Long and the other surfers out that day would have been quite so accommodating if they’d realized that Amin had never even stepped on a surfboard 5 years ago?

If Amin’s bizarre story is a publicity stunt then I am loathe to give it any more coverage, but the attention it has received so far belittles surfing and those who have made genuine sacrifices in pursuit of large or dangerous waves. To suggest that a teenager with so little experience and ocean knowledge could paddle out to one of the world’s most challenging waves and “conquer” it is nothing short of demeaning.

But maybe it’s not as big a deal as is being made out. As Andrew Cotton suggests, “everyone loves a story.” And he should know, being the “British Plumber (who) Conquered The Biggest Wave Ever.” The difference is, however, that his time served as a plumber was probably far less than his time served as a surfer, in big waves or otherwise.

Cotton countered my disappointment towards Amin’s stunt by suggesting that “You don’t have to be the best surfer in the world to surf the biggest waves in the world, you just need to have guts and the drive to put yourself in that situation.” Whilst I agree that this may very well be the case, the ripple effect of a lack of talent or experience could potentially threaten the lives of those who are more deserving of being there, and that is unforgivable.

Perhaps this has been blown out of proportion and, as Cotton says, “He (Amin) caught an inside wave, probably half the size of the set waves, made the drop, got smashed, then got rescued. It’s not like he was hassling Dorian at the peak.” Perhaps this sort of thing happens regularly at notorious big wave spots, and this is only newsworthy under the glare of the competition spotlight.  Or perhaps Adam Amin will go on to establish himself as a big wave surfer and will look back on this as his defining moment. But I think it is more likely that he reflects on this incident in years to come as an immature, ill-advised stunt in which he was fortunate to have experienced, skilled watermen on hand to provide rescue and account for his grave error of judgement.